A mixed bag of events: analysis of the Scottish referendum vote; strong interest in the seal of the confessional; and “really, really stupid” conduct in the Gloucester diocese

On Thursday we posted a summary of the material available on government sites relating to the Scottish referendum vote, and links to analyses on the UK Constitutional Law Association and the UCL Constitution Unit sites are included in “Quick Links” below. In the wake of the vote, however, a BBC/ICM poll [1] has shown that support for Welsh independence has fallen to its lowest recorded level: only 3% of those surveyed were in favour of Welsh independence, although support for increased power for the Welsh Assembly had risen to 49%.

The 23 September announcement by Katherine Jefferts Schori that she will not stand for re-election as Presiding Bishop of the Episcopal Church of the United States triggered reactions from sycophants and detractors alike. We are aware of the extensive and costly litigation that has accompanied her tenure of the post but on this side of the pond we are insufficiently close to events to tender any further comment. No doubt there will further analysis of her statement

“As bridges are built, more and more people can begin to cross the divides between us, and God’s dream begins to take flesh in a more just and peaceful world.

Together, we have navigated a season of extraordinary change in recent years. Our Christian values been have challenged and we are becoming clearer and more confident about the faith we share. Today we are far more cognizant of the diversity of this multinational and multicultural Church, and the great blessing of the diverse peoples and cultures we represent,“

A by-election with 15 candidates, but virtually no one from Oxford, Harlech, Stockton or other places associated with them able to vote? Following the death in June of Lord Methuen, a Liberal Democrat, another hereditary peer to is to be elected under the compromise reached in 1998 regarding the removal of most of the hereditary peers from the Lords, of whom 92 now remain. Details are included in the House of Lords Notice of 15 September, Hereditary Peers By-election. The BBC’s Mark D’Arcy notes “some of the pitches to the noble electorate make, er, interesting reading” – perhaps he means the Lords Calverley, (Crossbench), Layton, (Conservative), or Somerleyton, (Crossbench) – although personally we warm to the manifesto of Lord Sudeley, (Conservative).

D’Arcy states states that “[t]he result is due on 22 October and with candidates of several political affiliations, it will be interesting to see if peers stick to the loose agreement, “the Carter Convention”, under which a replacement hereditary peer is expected to be of the same party as his or her predecessor. If not, all kinds of party games could follow at later elections”. Indeed.

Seal of the Confessional

Our Monday post CofE to axe seal of confessional? attracted significant interest, and currently ranks as #1 in the cumulative totals of blogs posted over the past three months.  We suspect that this interest was driven by developments in the area of safeguarding, rather than this specific piece of canon law per se.  A future post will therefore consider these aspects and the on-going CofE consultation which closes on 3 October.

With regard to the repeal of the proviso to Canon 113 of the Code of 1603, this  may be considered by the November Synod, if selected for discussions from the list of Private Members’ Motions by the Business Committee.

Women in the episcopate

On Wednesday 24 September, the BBC carried the item “New Bishop of Gloucester 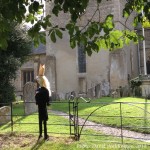 ‘likely to be a woman’”, based upon creative reporting  of the comments of the Archdeacon of Cheltenham who said he felt the likelihood was “really pretty high” as the diocese could now pick the best person regardless of gender. Those aware of the CNC timetable will know from Peter Owen’s blogs, here and here, that the next two diocesan sees to be considered after the November Synod are likely to be Gloucester and Oxford. However, unless they attended the Hanney Michaelmas Fayre, they will be unaware that a straw-woman candidate has already been put up as a replacement for +John Oxon.

Ignorance of church law in Gloucester Diocese, and most probably elsewhere

“The Diocesan Chancellor of the Gloucester, the Worshipful June Rodgers, sent out a strong message to Church of England clergy, churchwardens, parishioners, auctioneers, and antique dealers that they should not buy or sell any item belonging to a church unless they were sure that a faculty had been obtained from the diocesan chancellor, authorising the sale of the item in question.”

However, when read with another recent judgement in the Gloucester Diocese, Re St Giles Uley [2014] Gloucester Cons Ct¸ the case provides one further example of the ignorance and disregard for ecclesiastical law within the Church of England, an issue exacerbated by the lack of training within this area for clergy and laity alike, and one requiring the attention of the Archbishops’ Council.

A further issue of why this painting of the Madonna and Child by Franz Ittenbach[2], might have been consigned to a skip [para 15 page 20] may be evinced from the following, [para 16 page 21]:

“On 1st July 2013 the Priest in Charge wrote, in terms I quote, to the Church Wardens as follows:- “Elaine {a member of the PCC Standing Committee} reliably informs me that the Madonna and child was hung ‘out of sight’ on the wall of the chapel because it shows Mary as ‘Queen of Heaven’ and would have offended many in the church had she been on plain view. She suggests (hoorah!) that we sell the picture to someone who thinks that Mary is the Queen of Heaven (my words not hers) and who would appreciate having it.”

“No-one appeared to think [the painting] could have been at least used as a teaching tool for children as an introduction to their European art heritage, or, as to the history of religious observance. Nothing like that appeared to have entered the consideration of this parish. It did not seem to them to be modern, relevant or related in any way to their own current religious practices. No-one showed it any interest at all. In fact, it was actively disliked. I was told that it was antipathetic to the worship in this church; it seemed to them to be a “Roman Catholic” item. They wanted rid of it. They decided it had to go.”

Following the dispute between Bath Abbey and street musicians, reported here, a Joint statement was issued following a meeting between the Abbey Rector, Edward Mason, his colleague Claire Robson and street musicians Jack Morgan and Ben Powell on 25 September 2014. It states “the meeting provided an opportunity to share how distressing the last few days have been for both the Abbey and the street musicians. Apologies were given and received and both parties explored how they can work together towards resolving this issue … The meeting concluded warmly with a mutual determination to draw a line under the past and foster good relationships in the future.”

So it’s goodbye then, Brooks Newmark

On Saturday Brooks Newark announced his resignation as Minister for Civil Society in advance of a scandal story in the Daily Mirror, the truth of which he later admitted. Though the faith portfolio proper is currently held by Eric Pickles, Secretary of State for Communities and Local Government, the civil society brief is a very important one for religious organisations because almost all of them are charities. Newmark’s successor is Rob Wilson, Conservative MP for Reading East .

Tweeted Matt Chinnery rather tartly, “Well, I bet Brooks Newmark wishes he’d stuck to his knitting…”.  Quite so.

Further posts from Dr Edward Peters: on the so-called Kasper-Bergoglio proposal in regard to Communion for divorced-and-remarried Catholics; and the arguments surround reform of the annulment provisions:

and recent posts on Philip Jones’ Ecclesiastical Law blog include:

And from the UCL Constitution Unit,

More useful background information from the Office of National Statistics:

And finally: kippers and green butter

The 20th Cardiff LLM Reunion, held at Magdalen College, Oxford, on Monday 22nd September, provided one of the very few occasions on which Frank and David have an opportunity to meet face-to-face. Our conversation drifted towards cooking and the merits of kippers from different smokehouses, we pondered whether we should include the odd recipe in the blog: after all Kelvin Holdsworth has included his “famous pancake recipe” and Fr Z’s blog includes his lentil soup recipe and many photographs of his memorable meals. Whilst some of our readers might feel we should not mix food with “law and religion”, after finishing our meal with Magdalen Green Butter we thought it would be appropriate to pass on some of the suggestions as to the possible ingredients of this particular delicacy: certainly these included “butter, anchovies and a good deal of parsley” but we don’t think this was a marijuana-containing version.

[1] ICM Research interviewed a random sample of 1,006 Welsh adults aged 18 or over by telephone on 19-22nd September 2014. Interviews were conducted across Wales and the results have been weighted to the profile of all adults.