The McArthurs & Ashers Baking lost their appeal, the Northern Ireland High Court rejected a challenge to Brexit, the Vatican issued an instruction on what to do with cremated remains – and Hill Ch was rightly scathing about sloppy faculty applications…

Much the biggest news of the week was the judgment of the Northern Ireland Court of Appeal in Lee v McArthur & Ors [2016] NICA 29. The Court rejected the appeal of Colin and Karen McArthur and Ashers Baking against the ruling in the county court that they had discriminated directly against Gareth Lee on grounds of sexual orientation by refusing to bake him a cake with a slogan supporting same-sex marriage.

The judgment has attracted a variety of comments, most, but not all of it critical – see, for example:

Peter Tatchell’s comments should surprise no-one. Tatchell, though a veteran gay rights activist, has long argued that “in a free society, people should be able to discriminate against ideas they disagree with”. But in Morgan LCJ’s view, the issue was not one of discrimination against ideas, but of discrimination in the provision of services:

“The legislation prohibits the provision of discriminatory services on the ground of sexual orientation. The appellants are caught by the legislation because they are providing such discriminatory services. Anyone who applies a religious aspect or a political aspect to the provision of services may be caught by equality legislation, not because the legislation treats their religious belief or political opinion less favourably but because that person seeks to distinguish, on a basis that is prohibited, between those who will receive their service and those who will not … Thus the supplier may provide the particular service to all or to none but not to a selection of customers based on prohibited grounds” [100: emphasis added].

On Friday, in McCord, Re Judicial Review [2016] NIQB 85, Maguire J rejected the challenges to Brexit brought by Raymond McCord and a cross-party group of MLAs: we noted it here. Next up, the parallel claim in the High Court in London.

Justice Secretary Michael Matheson has told the Scottish Parliament that legislation will be brought forward to pardon men convicted of same-sex sexual activity that is no longer criminal. Officials have been in discussion with Police Scotland to identify the most effective way to ensure that past convictions for consensual sex between men will no longer appear on criminal records.

James Chalmers, Regius Professor of Law at Glasgow, told Scottish Legal News that Holyrood could pass a statute pardoning everyone convicted of same-sex sexual activity but there would be no way of knowing who those persons actually were. So a general pardon would have no practical effect – each individual affected would still have to apply for a disregard to stop the conviction showing up in a records check:

“But at least they will now be able to do that in Scotland, albeit several years after they could make that application in England and Wales.”

The Vatican on what to do with ashes after cremation

“5. When, for legitimate motives, cremation of the body has been chosen, the ashes of the faithful must be laid to rest in a sacred place, that is, in a cemetery or, in certain cases, in a church or an area which has been set aside for this purpose and so dedicated by the competent ecclesial authority …

7. In order that every appearance of pantheism, naturalism or nihilism be avoided, it is not permitted to scatter the ashes of the faithful departed in the air, on land, at sea or in some other way, nor may they be preserved in mementos, pieces of jewellery or other objects. These courses of action cannot be legitimised by an appeal to the sanitary, social, or economic motives that may have occasioned the choice of cremation.” 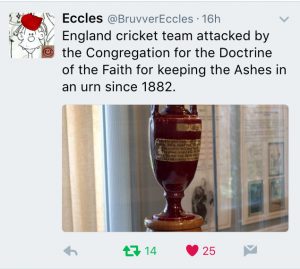 October’s judgments, published on 1 November, include a substantial reordering project, costing an estimated £3.48M, as well as more modest schemes. Two different approaches have been adopted to the vexed question of the replacement of pews with upholstered chairs and carpeting; and a trenchant judgment in Re St Andrew Witchford [2016] ECC Ely 2 can have left the Diocese of Ely in no doubt whatsoever about the responsibilities of incumbents, stonemasons and funeral directors to ensure that headstones conform to Churchyard Regulations.

A similarly strong message was sent by Hill Ch in Re St George Donnington [2016] ECC Chi 7, where the petition was “granted in spite of, rather than because of, the presentation of the case by the petitioners and inspecting architect”. Re St Laurence Alvechurch [2016] ECC Wor 3 includes a useful taxonomy of decisions relating to family graves; and the medium-term use of Ubiflex roof covering following a number of thefts is considered in Re St Mary Mappleton [2016] ECC Der 2.

The Guardian reports that Australian police have travelled to Rome and interviewed Cardinal George Pell about historic allegations of sexual assault. A police spokeswoman said on Wednesday that Pell, Australia’s most senior Roman Catholic, had “voluntarily participated in an interview”. Further investigations are continuing; but the police said that they could not comment further. A spokeswoman for Pell confirmed that he had been interviewed and that he rejected “all and every allegation of sexual abuse.”

On 2 August, we reviewed the compilation of the Church of England’s Daily Digest and the associated Guidelines. These have now been reviewed and the Digest is available only via email – all the more reason for readers to subscribe to this valuable awareness service via the Church’s Media Centre. The updated guidelines for the Daily Digest are here, which includes revised criteria for the reporting of blogs:

“Blogs: The only blogs to be included in the digest are those from either Archbishops and those appearing on the communication office’s own blog or on the Renewal and Reform pages. These blogs host a number of authors often writing about themes or issues which are being promoted by the NCIs.”

There’s probably an opportunity for some entrepreneurial blogger to fill the gap created by these changes – possibly along the lines of British Catholic Blogs. But it’s not something we are likely to undertake ourselves: it would be immensely time-consuming and the coverage would necessarily take us far beyond our basic remit of “law and religion”.

The designer of the reverse of the last “round pound” is Gregory Cameron, a keen numismatist whose day-job is Bishop of St Asaph. And the legal connexion? Earlier in his career he taught on the Cardiff LLM: Frank was one of his students.