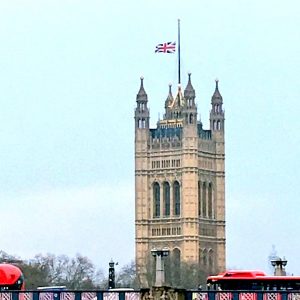 A thoughtful consideration of those events from an insider’s point of view was presented by the Rt Revd Nick Baines, Bishop of Leeds, in his Yorkshire Post article From a Palace of democracy to an Abbey of prayer, the best and worst of humanity, written just two hours after the end of the lockdown of parliamentarians and others, who had been transferred to Westminster Abbey.

Prior to the Commons consideration of the Pension Schemes Bill [Lords] and the subsequent adjournment and lockdown of the parliamentary estate, a first reading was given to Tim Farron’s Ten Minute Rule Bill, Terms of Withdrawal from the European Union (Referendum). A second reading was scheduled for Friday 12 May – although its chances of becoming law are zero.

On Monday, the UK’s Permanent Representative to the European Union, Sir Tim Barrow, formally notified the office of European Council President Donald Tusk of the UK’s intention to invoke Article 50 TEU on 29 March. The PM’s official spokesman subsequently confirmed that UKREP had been in contact with Mr Tusk’s office but declined to comment further at this stage.

On 20 March, the Institute for Government issued a useful analysis, Legislating Brexit The Great Repeal Bill and the wider legislative challenge and the House of Commons Library has produced a number of Research Briefings on the theme Brexit: next steps of UK’s withdrawal from the EU.

For legal anoraks interested in “What if…” scenarios, on the Constitutional Law Association website Richard Clayton QC has written The Brexit Case That Never Was, in which he examines the Parliamentary obligation “to give effect to the democratic will which the referendum expressed”, if the Courts had been given the opportunity to adjudicate on whether the referendum was disfigured by false statements made by the official campaigning bodies: was it the case that statutory recognition of the official campaign bodies meant that its activities were carried out in the exercise of its statutory functions; and were misleading statements made during the campaign subject to section 115(2)(b) of the Representation of the People Act 1983?

The Church Heritage Record is a digital database of church buildings integrated with a Geographic Information System (GIS), which complements the on-line faculty system; it can be used for planning and development control, as well as fulfilling an educational and engagement role. It contains over 16,000 entries on church buildings in England, covering a wide variety of topics from architectural history and archaeology, to worship and the surrounding natural environment.

The Church Heritage Record project was awarded a £9,900 Sharing Heritage grant from the Heritage Lottery Fund to catalogue, digitise and promote the Canon Clarke archival collection, which contains information on 11,479 Anglican and Roman Catholic churches in England, located in the CCB’s library at Church House, Westminster. The project began in April 2016; two archive volunteers catalogued and digitised the collection which is now free to search online.

On the afternoon of 22 March 2017, a lecture was given in Lambeth Palace on London’s 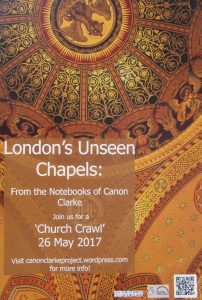 Churches and Chapels – a Miscellany, by Dr Jenny Freeman, an architectural writer, lecturer and historian, a practitioner in building conservation and specialist developer of listed buildings “at risk”. The event is to be followed up by a guided “church crawl” on 26 May.

Neither Dr Freeman nor her audience seemed distracted by the almost constant sound of police sirens or the helicopters overhead as the events in Westminster unfolded. Unfortunately, Dame Caroline Spelman was unable to open the event, being detained with other parliamentarians &c in Westminster Abbey, supra.  Since Lambeth Palace is south of the river, travel plans to and from the event were made more complex given the closure of both Lambeth and Westminster Bridges.

On 24 March, the Archbishops of Canterbury and York issued a joint statement indicating that they had written to Sir Philip Mawer, the Independent Reviewer, to address the concerns that had arisen in the Church following recent events concerning the appointment of the Rt Revd Philip North, Bishop of Burnley, to the See of Sheffield. As we noted in our earlier post on 11 March, such an assessment by the Independent Reviewer is provided for under the terms of paragraph 27 in the House of Bishops Declaration GS Misc 1087. To us, this seemed to be an obvious, ready-made means of taking the issue “off-line” and reviewed by an independent party who has been fully versed in the issues since his appointment in 2014. On 28 March we posted The Independent Reviewer and the Sheffield See – A Review on the Reviewer which summarizes the work of Sir Philip to date, the House of Bishops Declaration, and the scope of his consideration of the appointment to the See of Sheffield.

The Church in Wales does not have an equivalent role that can provide an assessment and degree of transparency to the claims and counter-claims surrounding the appointment of the next Bishop of Llandaff and the related resignation of the Assistant Bishop of Llandaff.

It was reported on Tuesday 28 March that following a complaint by five members of the Electoral College concerning ‘deeply inappropriate’ references which were made to Dr Jeffrey John’s homosexuality during the consideration of his nomination, a formal investigation has been launched into the process; a legal panel chaired by a judge will decide whether to scrap the decision not to take Dr John’s nomination forward.

The Conservative Party and human rights

Last week, we stumbled across Ideas: Conservatism and Human Rights, launched in May 2016, a spin-off from the Conservative pressure-group Bright Blue, which, as we noted at the time, published Conservatism and human rights: essay collection in March 2016.

“how Conservatives can think about human rights in a positive way that draws on Conservative traditions of individual freedom and empowerment. It will also evaluate what the Conservative Government has done on human rights, and explore new narratives and policies, which ensure that human rights are strengthened both in the UK and abroad.”

Last week, Bright Blue announced that the Commission’s report would appear at some point “in the spring”.

One of the stranger exchanges in Commons Hansard this week went as follows:

“Thangam Debbonaire: What guidance is issued to churches on allowing church premises to be used for yoga classes. [68543]

Dame Caroline Spelman: The Church of England takes a flexible approach to yoga classes in church halls, with decisions left to the discretion of the local Parochial Church Council. Advice and guidance is available for parishes that are considering hiring their church hall out, which can be found here:.”

We do like the “flexible approach” to yoga, and it’s no doubt all very interesting: but what has it got to do with the Church Commissioners? Furthermore, whilst Dame Caroline’s Delphic response provided Thangam Debbonaire with an answer to her question, as required, the guidance she referred to does not give a PCC the information needed to avoid decisions which might be discriminatory.

This elderly document (September 2002) addresses the issue of New Religious Movements and their relationship with the Church of England; discrimination is not addressed. Our thoughts on this area were considered in the posts Can a religious group discriminate when hiring its premises? and Hiring Church Premises – Some further thoughts. Perhaps the Church’s advice is in need of revision?

The 2017 LARSN Conference will take place on Friday 19 May at the Vrije Universiteit Amsterdam and will be co-organised by the Law and Religion Scholars Network, Cardiff, and the Centre for Religion & Law of the VU, the latter in cooperation with the Dutch Researchers Network Law and Religion. Papers are invited from both academics and postgraduate research students on any aspect of Law and Religion, preferably on one of the topics below. The sessions in which the papers will be clustered are:

Registration costs €30: you can sign up here. To submit a paper for consideration, please complete the submission form with an abstract of up to 300 words by Friday 7 April. The form is available from the VU Centre for Religion & Law, here.

The Church of Scotland: On 30 April, the Saint Andrew Press will be publishing From Reform to Renewal: Scotland’s Kirk Century by Century, by the Very Revd Dr Finlay Macdonald – who, as a former Moderator and Principal Clerk of Assembly, has forgotten more about the law and history of the Church of Scotland than we have ever learned. (Frank has already ordered his copy.)

Ethics and pluralism: Springer International is shortly to publish Ethical Exploration in a Multifaith Society by

Catherine Shelley, editor of Gospel and Law (see below). “Much ethics taught in the UK has been dominated by Christian ethics, their relation to secularism and by the Enlightenment’s reaction against theology as a basis for ethical thought. In contrast to these perspectives, this book brings secular and theological ethics into dialogue, considering the degree to which secular ethics has common roots with theological perspectives from various traditions.”

Our 17 March post Municipal cemetery development and the faculty jurisdiction was based upon the version of Re Camberwell Old and New Cemeteries as it initially appeared on the ELA website. This has been subject to some amendments and our link to the judgment, [2017] ECC Swk 2, has now been updated and the post revised.

I don’t feel quite the same about Boris Pasternak since I learned his surname is the Russian for parsnip. #bathos