Whilst the substance of the concerns raised regarding the re-use of jam-jars, reported here, has little to do with the health and safety in the churchyards, both issues have a common thread of the local interpretation of national guidance, and the application of legislation to the practical situation.  Those seeking guidance, either on a personal basis or on behalf of a group with common interests, are often left confused and left to their own interpretation. 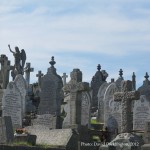 Following reports in the media that pots, vases and other items had been removed from the graves in a churchyard on ‘health and safety grounds’, the Health and Safety Executive, (HSE), issued a clarification (now unavailable).  This was placed on its web page devoted to ‘Putting the Record Straight’, i.e. ‘responding to health and safety related articles and reports in the British media’, and unlike the FSA in the jam-jars situation, issued the unambiguous statement:

‘There is nothing in health and safety law that would prevent people from placing pots or vases on the resting place of their loved ones. However, as the ownership and upkeep of the grounds falls to the Church, the Church is at liberty to make whatever decisions it feels appropriate in which to maintain its graveyard’.

The issue had arisen as a result of a local interpretation of the Church of England’s own Churchyard Regulations and those of the diocese, neither of which made reference to health and safety issues.  Under ecclesiastical law, the ownership of the churchyard is vested in the incumbent, whereas the control over the churchyard lies with the Chancellor of the Diocese.  Although every change in a churchyard requires the authority of the Chancellor, some aspects are generally delegated to the incumbent of Rural/Area Dean during a vacancy.  The decision to remove the flower containers was apparently made locally and in line with diocesan regulation that:

‘Permission may be given for a single flower vase to be sunk in the base of the headstone and it may, if granted, have a stone cover to be placed over the flower vase in the winter’, [Regulation 15],

although it is not clear whether this is for aesthetic or health and safety considerations.

The regulations concerning churchyards and graveyards are complex, and the HSE’s clarification represents only one aspect of their management and maintenance.  Even in this narrow area, whilst statutory health and safety legislation does not preclude the circumstances referred to, the common law of negligence must also be considered and whether an accident resulting from the breakage of vases &c would be regarded as ‘reasonable foreseeable’.  The HSE statement could be taken as suggesting that such an incident was unlikely, although a narrower interpretation might be the view that specific provisions on this issue were not included in any statutory provision.

The range of safety issues associated with churchyards is demonstrated in the Church of England’s Guidance Legal Advisory Commission of the General Synod: The Maintenance of Monuments in Closed Churchyards.  In the case of monuments in churchyards closed by an Order in Council, the primary responsibility rests with the owner of the monument.  If the owner defaults, a secondary responsibility is imposed on the body having the duty to maintain the closed churchyard, which may be the PCC or the local authority if it has taken over its maintenance.  Some dioceses publish detailed health and safety advice concerning churchyards in general and the charity Caring for God’s Acre has issued a scheme for risk assessment, (this is now unavailable).

Unfortunately, there is no such definitive test for jam-jars, and some might be tempted to follow the advice of W S Gilbert’ Pooh-Bah, (though not of this blog),

“Oh, as your Solicitor, I should have no hesitation in saying ‘Chance it —‘ ”

Cite this article as: David Pocklington, "Health and Safety in the churchyard – national guidance and local interpretation" in Law & Religion UK, 11 October 2012, https://lawandreligionuk.com/2012/10/11/health-and-safety-in-the-churchyard-national-guidance-and-local-interpretation/