As a consequence of the recent heavy rainfall, the British Geological Survey has reported a four- to five-fold increase in the number of landslides in the UK for July and December when compared with previous years.  Contributing to this pattern, the (visually) most prominent church in Whitby has suffered the loss of part of its churchyard, which was made famous in the 19th century by Bram Stoker.  In Chapter 6 it is described as

“the nicest spot in Whitby, for it lies right over the town, and has a full view of the harbour and all up the bay to where the headland called Kettleness stretches out into the sea. It descends so steeply over the harbour that part of the bank has fallen away, and some of the graves have been destroyed.”

In keeping with its literary past, there are reports of human bones 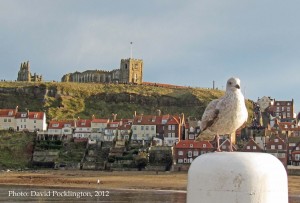 cascading down on the homes below, but away from the headlines, it appears as though the material surrounding some of the older burials has been washed away, leaving some bones exposed and others washed down into the gardens of the homes and Fortune’s kipper smoke house.  These have been reinterred by the church in a more secure part of the churchyard, and whilst there are clearly issues associated with the interment of different parts of the same body in spearate parts of the churchyard, these are not the major problem facing the church.

The present landslip has been attributed to a fractured drainage pipe, but as our photograph taken on 3rd November demonstrates, even before the landslip later in the month, the houses were in a vulnerable position.  Those addressing the resultant liabilities will no doubt be mindful of Leakey & Ors v National Trust [1979] EWCA Civ 5, [1980] QB 485 which, following Goldman v Hargrave & Ors [1966] UKPC 2, held that a defendant is liable under the tort of negligence for a naturally-occurring hazard on the land if they are aware of the danger and failed to act with reasonable prudence to remove the hazard.  The circumstances of Leakey are quite similar to those at St Mary’s and elsewhere in Whitby,

“As a result of the operation of natural agencies on the steep contours of Burrow Mump, [the land owned by the National Trust], where its western slope rises in a bank at the back of the plaintiffs’ houses, there have from time to time over the years, for many years past, been slides, often quite minor, sometimes more substantial, of soil, rocks, tree-roots and such-like detritus, from the bank, which belongs to the defendants, on to land belonging to each of the plaintiffs . . . . . “

However, in Holbeck Hall Hotel Limited & or v Scarborough Borough Council [2000] 2 All ER 705 [CA] which related to a landslip further down the coast (but within the boundaries of the same BC), the Court of Appeal held that the Council was not liable, on the grounds that when assessing the scope of the duty imposed under Leakey, the courts are to take into account the resources of the defendant.  Stuart Smith LJ stated, [at 46]:

“the law must take account of the fact that the occupier on whom the duty is cast has, ex hypothesi, had this hazard thrust upon him through no seeking or fault of his own. His interest, and his resources, whether physical or material, may be of a very modest character either in relation to the magnitude of the hazard, or as compared with those of his threatened neighbour. A rule which required of him in such unsought circumstances in his neighbour’s interest a physical effort of which he is not capable, or an excessive expenditure of money, would be unenforceable or unjust. . . . . . . .One may say in general terms that the existence of a duty must be based upon knowledge of the hazard, ability to foresee the consequences of not checking or removing it, and the ability to abate it”.

The legal position on churchyard maintenance was considered by the Select Committee on Environment, Transport and Regional Affairs in its Eighth Report in 2001, and more recently by the Church of England in its own legal guidance which states:

“Although the legal ownership of a churchyard, either open or closed, is usually vested in the incumbent, his own rights and obligations in respect of it are very limited.

Today, under Canon F13, responsibility for maintaining the churchyard in good condition and maintaining fences rests with the parochial church council (PCC), except in the case of a burial ground which has been closed by Order in Council and where the obligation has been passed to the local authority (see paragraphs 14-18), but the PCC can seek financial help from local authorities and other public bodies.

The PCC, whatever the funds at its disposal, must take appropriate steps to deal with any dangerous situation, such as an unsafe monument. The incumbent and the PCC should be adequately covered by insurance against any damages which may be awarded in the event of an accident, but the insured will still be required to take all reasonable steps to remedy any defect which is discovered.” [Emphasis added]

In the case of St Mary’s, the churchyard has been closed since 1865 and the Diocese of York is reported to be carrying out engineering work to stabilise the ground.  There has been concern for the church, a Grade I listed building, rated as ‘four stars’ Simon Jenkins in England’s Thousand Best Churches, (Penguin, 1999), but perhaps better described on the CofE site A Church near you as

“ . . . .  a church like no other. The character of Whitby has seeped into its fabric, and it stands as a testimony to the independent maritime spirit of the town. Each successive generation has left its mark on the original 11th century foundation.

The building is remarkable for its box pews, triple decker pulpit, and Elizabethan communion table, as well as several fascinating details. For those devoted to St. Hilda, it is a place of pilgrimage, and a warm welcome awaits you from our small but stalwart congregation.”

The church itself is not at risk of collapsing, nor is the ‘newer’ Whitby Abbey, beyond.

The “Dracula connection” to Whitby and in particular to St Mary’s churchyard, is a source of contention between the church and those wishing to exploit this link, which some estimate as being worth ~£1M to the town each year.  In 2011, photographers were banned from taking pictures in the churchyard over the Whitby Gothic Weekend of Goths posing on or near gravestones, but close examination of our 2012 photograph will reveal the many visitors lining the edge of the churchyard, and (to the right of the seagull) climbing the famous 199 steps to the church and the Abbey. As custodians of Whitby Abbey, English Heritage is more than willing to exploit these weekends, with mock Victorian funerals, &c. 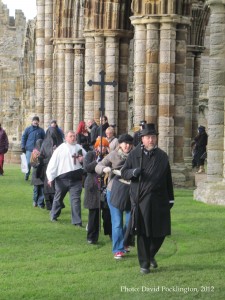 The church is faced with two dilemmas: one of ensuring the safety of its many visitors, particularly on the biannual Goth Weekends; and the other on how to respond to a post-landslip request to use the 199 steps (which the church also owns) and churchyard for a vampire-based film. The churchwarden is reported to have given an emphatic “no” to the proposal, but the decision on their use rests with the incumbent.

The filming of controversial scenes in churches is not unknown, here, and astute readers will recall that the advice of Bishop Justin Welby was sought in relation to the fliming of a controversial episode of the 1960s police drama Inspector George Gently. In this case

“the episode reflected the cathedral’s history of having been a place of both sanctuary and brutality and was a kind of morality play in which it was obvious the perpetrator of the violence was bad, and good and evil were clearly identified.”

A subsequent report in the Church Times has suggested that the Dracula link could help to meet Whitby’s repair bill which is approaching £40,000, as news of the story has brought offers of help from around the world.