… as Marie Antoinette almost certainly did not say. However, the unfolding horsemeat fiasco has inevitable implications for members of religious groups with strict dietary laws: some bad, some (perhaps surprisingly) good. As we noted, the Jewish Chronicle reported that the scandal has led to an upsurge in kosher beef sales – presumably not all of them to observant Jews. 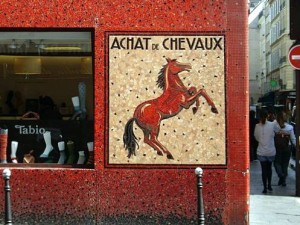 Following an initial Gallic shrug at the problem and a suggestion blaming the “English ethnocentric attitude that applies also to rabbit, andouillette, frogs and calves’ heads”, French supermarkets are reported to be withdrawing products linked to the horsemeat scandal.  Nevertheless, France’s equine butchers have seen a 15 per cent rise in sales. Agriculture minister
Stéphane Le Foll said that the rules were simple: “There has to be a correspondence between the container and what’s in it”, presumably stating the Shergar content. Further analysis (and puns) are on David Hart’s post on the UKHR Blog. A more concerning issue, however, is Defra’s proposed derogation (“to serve UK interests”)  in the Food Information Regulations 2013 for minced meat that does not meet the compositional requirements of Part B of Annex VI of Regulation (EU) 1169/2011.

The EHRC on religion or belief at work

The Equality and Human Rights Commission published two documents on religion and belief in the workplace – its guidance for employers and a legal analysis – arising out of the ECtHR judgment in Eweida and Others v United Kingdom [2013] ECHR 37. We felt that some of it could have been explained rather more carefully – and posted about it here. The post was picked up by the Church Times.

On 19 February the Grand Chamber of the European Court of Human Rights handed down its judgment in X and Ors v Austria 19010/07 – HEJUD [2013] ECHR 148. In brief, the case was about a complaint by two women who live in a stable same-sex relationship about the refusal by the domestic courts to grant one of the partners the right to adopt the son of the other partner without severing the mother’s legal ties with the child.

The Grand Chamber held by ten votes to seven that the difference in treatment between the applicants and an unmarried heterosexual couple of which one partner sought to adopt the other partner’s child had been based on the women’s sexual orientation. No convincing reasons had been adduced as to why such a difference in treatment was necessary for the protection of the family or for the protection of the interests of the child; and there had therefore been a violation of Article 14 ECHR (discrimination) taken in conjunction with Article 8 (respect for private and family life).

This is a complex judgment and we shall post a considered note on it next week.

Reminder for response to CofE Consultation Women in the episcopate consultation

Responses to the “next steps” consultation paper Women in the episcopate: a new way forward GS MISC 1042 should be sent to the Working Group via women.bishops@churchofengland.org “if at all possible” by Thursday 28 February in advance of its next meeting on 4 March.  A summary of the paper is given here and a more detailed analysis here.

Next week the Roman Catholic world will be watching for developments following the retirement of Benedict XVI at 20-00 on 28 February.  Whilst some sections of the media are focusing their attention on “pope-bashing” and speculation as to the new incumbent, closer attention to developments in the Vatican reveals that in the remaining weeks of his papacy, the Pope is continuing to exercise his authority through new appointments and legal developments.  As Vice-Prefect of the Vatican Apostolic Library, Ambrogio Piazzoni, stated:

“the Pope remains the supreme legislator until 19:59 on 28 February and can make changes to laws to do with the Conclave as well, [because] the Holy Father is the only one who can modify legislation concerning the Conclave. . . . [and] only the Pope can interpret the law up until he resigns”.

With regard to the former, following his announcement he appointed German lawyer Ernst von Freyberg to head the troubled Vatican bank officially known as the Institute for Works of Religion.  Furthermore, in what is described as “unusual last minute nomination and an important one”, the Vatican’s “foreign affairs minister” is being replaced just days before the sede vacante period:  Mgr Ettore Balestrero is being promoted to the post of Apostolic Nuncio of Colombia and is being replaced by Antoine Camilleri, former personal secretary to Dominique Mamberti, the Vatican Secretary for Relations with States.

The Guardian reports that Archbishop Georg Gänswein, (“il Bel Giorgio”), will continue to be Benedict XVI’s private secretary and will accompany him initially to Castel Gandolfo and later to the Mater Ecclesiae convent.  However, he will also continue to be prefect of the Papal Household of the new Pope.

With regard to the Conclave, Vatican Insider reports that the Pope is considering issuing a motu proprio in the next few days, before the sede vacante period begins, to clarify some key points of the Apostolic Constitution on the Conclave (Universi Dominici Gregis).  According to Fr Lombardi, the clarifications made in the Pope’s motu proprio could be to do with “details” such as the “full compliance with another document relating to the Conclave, the “Ordo Rituum Conclavis”, which sets out the rules for the prayers and phrases recited during the election of a new Pope.

“If in the past the so-called powers, i.e., States, sought to influence the election of the Pope, today there is an attempt to do this through public opinion, which is often based on judgments that do not capture the typically spiritual aspect of this moment that the Church is living.

It is deplorable that, as we draw closer to the moment that the Conclave will begin and the Cardinal electors will be held—in conscience and before God—to freely express their choice, there is a widespread distribution of often unverified, unverifiable, or even completely false news stories that cause serious damage to persons and institutions.

Never before as at this moment are Catholics focusing on what is essential: praying for Pope Benedict, praying that the Holy Spirit might enlighten the College of Cardinals, and praying for the future Pope, confident that the future of the barque of Peter is in God’s hands.”

Richard Ottaway’s Scrap Metal Dealers Bill passed its third reading in the House of Lords on 12 February, and as no amendments were made is now awaiting Royal Assent, at a date yet to be set. The Chair of the Church of England’s Cathedral and Church Buildings Council welcomed the new legislation as the outcome of a two-year-long campaign led by the Council. She noted the assistance of “a number of organisations and individuals whose hard work has led to the successful passage of this Bill, not least the Bishop of London, Lord Faulkner of Worcester and the Second Church Estates Commissioner, Sir Tony Baldry MP.”

And finally, a judgment to watch out for

In January the Inner House of the Court of Session heard argument in the reclaimer by Roman Catholic midwifery sisters Mary Doogan and Concepta Wood against the first-instance rejection of their conscientious objection to supervising Glasgow Health Board staff taking part in abortions. The appeal judges are currently considering their decision (or, as they say in Scotland, making avizandum). Whichever way it goes, it will be extremely important judgment.