More on the EU and the ECHR

For months Frank has been banging on in various places on the Web about the apparent impossibility of the UK withdrawing from the European Convention on Human Rights and still remaining a member of the EU. Joshua Rozenberg now makes the same point (but with massively more authority than Frank, who has none whatsoever) in the Law Society Gazette. Rozenberg’s view is that the agreement on EU accession to the ECHR

“…  is drafted on the basis that some members of the Council of Europe will be EU states and some will not. It does not provide for the possibility of a state that is a member of the EU but not the Council of Europe. And yet that was the idea floated last month by the home secretary, when Theresa May suggested the UK might leave the human rights convention. When people in the UK are allowed to take the EU to the ECtHR, that prospect will become even more implausible” [our emphasis].

Abortion and maternity care in Ireland

In last week’s round-up we mentioned the reopening of the inquest into the death of Savita Halappanavar, who miscarried at University College Hospital Galway in October 2012. and died of septicaemia a week later. The inquest concluded on 19 April and the jury returned a unanimous verdict of death by medical misadventure. According to the Irish Times report, the jury endorsed the coroner’s recommendations, of which the most important was that

“… the Medical Council should lay out exactly when a doctor can intervene to save the life of the mother in similar circumstances, which would remove doubt and fear from the doctor and also reassure the public. An Bord Altranais [the Nursing Board] should have similar directives for midwives so that the two professions always complement one another”.

Which is admirably sensible but no consolation whatsoever to her husband.

Can a trades union be institutionally racist?

We noted the Employment Tribunal decision in Fraser v University & College Union [2013] ET 2203290/2011 (22 March 2013) that the Union could not be held vicariously liable for anti-Israeli statements and resolutions by its members. In brief, the Tribunal rejected the claimant’s allegations that the Union’s acts and/or omissions in relation to criticisms of Israel in various motions and resolutions at its Congress constituted unlawful harassment contrary to ss 57(3) and 26(1) of the Equality Act 2010. Belief in Zionism was not a protected characteristic under the Act and, in any case, the behaviour of the respondent Union was not connected in any way whatsoever with the claimant’s Jewishness, nor did it have the effect of violating his dignity or creating an adverse environment for him.

It is possible to read the judgment as a straightforward defence of freedom of speech and of association against the need to protect people from opinions that they might find hurtful or disturbing. But, inevitably, it is much more complicated than that, not least in relation to the question of whether or not a belief in Zionism is “intrinsically a part of Jewishness”. The Tribunal thought that it was not: if the judgment in Eweida and Ors v United Kingdom is any guide, the ECtHR might have taken a different view.

The Irish Convention on the Constitution, established by Resolution of both Houses of the Oireachtas to consider and report on various possible constitutional amendments, has recommended in favour of making constitutional provision for same-sex civil marriage. 79 per cent of delegates voted in favour, 19 per cent voted against and 1 per cent abstained. The Convention further voted that any amendment should be directive (“the State shall enact laws providing for same-sex marriage”) rather than permissive (“the State may enact laws… ”). Delegates also agreed that the State should enact laws incorporating any changed arrangements in regard to the parentage, guardianship and the upbringing of children.

A report will now be drafted and the Convention’s recommendations will go to Government – which is committed to responding within four months with a debate in the Oireachtas and, if Parliament agrees the recommendation to amend the Constitution, with a time-frame for a referendum. If Ireland does at some future date enact legislation for same-sex marriage and if it survives the necessary referendum, the likely outcome is that same-sex marriage will become possible in three of the jurisdictions in the [?British ?North-West European] Isles but not, for the foreseeable future, in the fourth: Northern Ireland.

In an earlier post we reported that during the Report Stage of the Enterprise and Regulatory Reform Bill 2012-13, on 4 March 2013, the House of Lords had made significant amendments through the insertion of “caste” as a further sub-paragraph (d), after section 9(1)(c) of the Equality Act 2010, thereby making it a protected characteristic under the “race” criterion.  Their Lordships additionally rejected the Government’s planned repeal of the Equality and Human Rights Commission’s “general duty” under section 3 of the Equality Act 2006 to promote equal opportunities and prevent unfair discrimination.

However, as anticipated, when the Bill was returned to the Commons on 16 April, the Lords amendments were overturned.  The Bill will return to the Upper House for further consideration on 22 April.

Human Rights in Ireland has an interesting post on the caste issue by David Keane.

Our post addressed the legal issues highlighted by the ceremonial funeral of Baroness Thatcher: the distinction between state funerals and ceremonial funerals; those involved in relevant decisions; and a summary of the costs and other information within the public domain, noting the current Freedom of Information requests.  On 16 April, the Speaker informed the Commons of his decision on how “the House and Parliament as an institution might best mark this occasion” i.e. that “our sentiments would be for the chimes of Big Ben and the chimes of the Great Clock to be silent for the duration of the funeral proceedings”.

Public order issues associated with the funeral and the application of the Public Order Act 1986 are considered on the Law and Lawyers blog of Obiter J. However, there were no reports of any arrests being made.

Details of the service, described by the Church Times as being “steeped in the secular patriotism of the woman who devised it all in meticulous detail”, are available on St Paul’s Cathedral web site. Lady Thatcher’s biographer, John Campbell, commented that her choice of readings and hymns for her own funeral service was so appropriate that it almost amounts to self-parody, although The Economist’s Erasmus blog gave an alternative analysis. Nevertheless, we note with approval the inclusion of Purcell’s Hear my prayer, O Lord.

A Faculty for Margaret Thatcher? 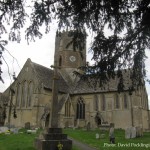 The will of Baroness Thatcher’s late husband, who died in 2003, included provisions for a plaque in memory of himself and the former Prime Minister to be placed on the outer wall of the south porch of St Mary, Uffington, which presently contains six other plaques to the Thatcher family. The church of St Mary is a Grade I listed building (“the Cathedral of the Vale [of the White Horse]”) with links to Sir John Betjeman [1], who as churchwarden insisted on the retention of the old oil lamps when electricity was introduced in the 1930s. 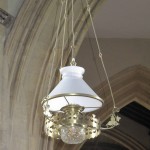 Advice is being sought from the Oxford DAC regarding a faculty, which will be subject to the new Court of Arches Guidance following its ruling in Re St Alkmund Duffield which adopt a less restrictive approach than that imposed by the “Bishopsgate questions”.  Under normal circumstances, most DACs indicate that it is normal not to allow memorials shortly after the person’s death, so that their life and achievements/contribution may be seen in perspective.  These periods for reflection vary from 12 months, Southwark, to 5 years, Coventry and Leicester, or are indeterminately long, such as ‘several years’ for Exeter DAC. This would clearly be unnecessary in this case, and although it is reported that neither Baroness Thatcher nor Sir Denis had visited St Mary’s “in recent memory”, the existing family connection is likely to be more persuasive.

Rorate caeli has announced a new site – the Canon Law Centre – which may be of interest to Catholic priests (in the US) who are in need of a canon law advice and services, “everything from answering simple questions to full-on representation,” (which are being offered gratis). The site also has blog and “resources” sections which will be of general interest to many working in this area.

Hard times in the Curia: from Pastor Bonus to Cardinals’ Bonus

Although individually not on the scale of the bonuses awarded to executive directors as recently addressed in the new policy of the Church’s Ethical Advisory Group (EIAG), Pope Francis has decided that Vatican workers will not receive the bonus traditionally given at the end of a pontificate as a parting gift from the former Pope, and at the beginning of the new pontificate.  The bonus affects ~4,500 working at the Vatican and after the death of John Paul II they were given €1,000 with an additional €500 bonus after the inauguration of Pope Benedict XVI.  Reports differ as to the exact numbers involved, but these payments appear to total about €7 million.  They money will not be used to offset the Vatican’s debts, reported to be €14.9 million in 2012, but directed towards charities.

In a separate move, the Pontiff has ended the additional monthly allowance, (il piatto cardinalizio, the “Cardinals’ cheque”), of up to  €2,100 paid to each of the five Cardinals who oversee the operations of the Istituto per le Opere di Religione, (IOR), aka the Vatican Bank. (All other Cardinals of the Curia receive the same amount. Those not within the Curia take their pay from the dioceses of which they are bishops.)

With Curial reform on the agenda of the group advising the Pope, (referred to by some bloggers as the “G8”, “Super-cardinals” or ”Pope’s Privy Council”), and the Pope’s recent exhortation against careerism in the clergy, it may not be long before attention is directed towards a stricter application of term appointments which are nominally made ad quinquennium.

The Telegraph reports that Shirley Chaplin, Gary McFarlane and Lillian Ladele are to appeal to the Grand Chamber ECtHR against the rejection of their claims by the Fourth Section.

[1] In a letter to his daughter, Betjeman said that Uffington was the furthest place he could find from London from which he could leave and return in one day.  He also commented on the low rail fares.

2 thoughts on “Religion and Law round up – 21st April”