Another busy week with parliamentary debate on same-sex marriage, and the Church of Scotland’s decision on ministers in civil partnerships

On Tuesday next, 28 May, the European Court of Human Rights will announce its decision on the request to refer to the Grand Chamber the cases of Shirley Chaplin, Lillian Ladele and Gary McFarlane. As regular readers of this blog will know, all three cases are about the extent to which the applicants have the right to manifest their religion in the workplace: in Mrs Chaplin’s case the refusal by her local NHS trust on health and safety grounds to allow her to wear a crucifix on a neck-chain, in the case of Ms Ladele her desire to opt out of performing civil partnership ceremonies and in relation to Mr McFarlane his objection to giving psycho-sexual counselling to same-sex couples. In its judgment in January in Eweida & Ors v United Kingdom [2013] ECHR 37 (which is not final), the Fourth Section held:

We shall report the outcome of the application asap.

MPs completed the report stage and third reading of the Marriage (Same Sex Couples) Bill on Tuesday 21 May 2013, voting 366 to 161 in favour. There have been few changes to the Bill since it was first introduced; but New Clause 16 in conjunction with a Labour amendment (for an immediate review of the extension of civil partnerships to opposite sex couples) ensured that Tim Loughton’s so-called “wrecking amendment”, New Clause 10, failed. [Note by Frank: had it been a wrecking amendment in the proper, technical sense of that term it would have been out of order and could not possibly have been selected for debate.] Our summary of the two days’ debates is here.

The Bill now moves to the Upper House where, although likely to meet substantial opposition, it will be difficult for the Lords to block the Bill. It remains to be seen whether their Lordships subject this to the same high-level of legal scrutiny as they did Baroness O’Cathain’s “prayer to annul debate” [HL Hansard 15 December 2011 Col 1408] on marriage and civil partnership ceremonies in religious premises.

A number of misconceptions on same-sex marriage still remain and Adam Wagner explored them in a piece in the New Statesman “Myths and realities about Equal Marriage”. To these should be added the absence of a statutory definition of “marriage” – which we explored here – and the fact that the situation is further confused by paragraphs 1 and 2 of Schedule 3 to the draft Bill [1].

Marriage, registration of places of worship and Ms Hodkin

We have previously noted the judgment of the Administrative Court in R (Hodkin) & Anor v Registrar General of Births, Deaths and Marriages [2012] EWHC 3635 (Admin), in which Ouseley J decided that he could not overturn the Registrar General’s refusal to register a chapel of the Church of Scientology as a place of meeting for religious worship under s 2 of the Places of Worship Registration Act 1855 (and consequently authorise its use for the solemnisation of marriages) because he was bound by the previous decision of the Court of Appeal in R v Registrar General ex parte Segerdal [1970] 2 QB 697 about the nature of Scientology.

His Lordship made a pretty strong suggestion that Ms Hodkin – who wishes to marry her fiancé in a religious ceremony at the Scientologists’ chapel in central London – should appeal his decision; and she has now been given leave to appeal direct to the Supreme Court. The SC hearing  will take place on 18 July.

By a tragic coincidence, the day on which the far-right activist and writer Dominique Venner took his own life in the sanctuary of Notre Dame was scheduled for the 5th annual vigil – La veillée pour la Vie – at which prayers made “that life is respected from its beginning to its end”. Venner’s action was a protest against the introduction of same-sex marriage in France. Following a Mass of Reparation, as required by Canon 1211 CIC, the prayer vigil went ahead as planned, although on the following day there was an anti-fascism, mock-suicide protest in the Cathedral by FEMEN.

General Assembly of the Church of Scotland

We reported the General Assembly of the Church of Scotland’s vote, in principle, to allow men and women in civil partnerships to be ordained to the ministry and/or inducted as parish ministers. The compromise Deliverance (GA-speak for “resolution”) reaffirmed the Kirk’s traditional view on the issue of same-sex partnerships but would allow an individual Kirk Session to choose to call a minister in a civil partnership if it so wished.

Our understanding of the next steps in the process is that a draft Overture will be considered by the General Assembly of 2014 and, if agreed, will be sent down to the presbyteries under the Barrier Act 1697 and implemented if a majority of presbyteries approves the proposal and the General Assembly of 2015 confirms it. No-one has yet told us that our estimate of the time-scale is wrong – but Frank is currently consulting an expert on the law of the Kirk, so this may change.

The Assembly also debated a joint report from the Church and Society Council, the Committee on Ecumenical Relations and the Legal Questions Committee on the implications for the Kirk of Scottish independence. One of the issues that caught the media’s attention was whether or not, should Scotland become an independent state, there should be a separate Coronation of the next Monarch. The resulting Deliverance included the following: that the Assembly believe that in the event of independence,

“a. that the Queen (and her heirs and successors) should be the head of state of Scotland.

b. that the monarch should have a Scottish coronation or investiture to symbolise her or his role as Queen or King of Scots, including the obligations to uphold Scottish religious life and traditions, and in particular her or his role with regard to the Church of Scotland”.

This may appear slightly marginal to “law & religion” but it is not totally irrelevant, for two reasons: the constitutional position of the Kirk and the fact that for the period during which the Scottish Parliament was in limbo the GA took on the role of acting as a sounding-board for national concerns – and not merely for national concerns of a religious character.

Coincident with the two days of parliamentary debate on same-sex marriage was a meeting of the Church of England’s House of Bishops in York at which the bishops deliberated on two other issues of importance: the reintroduction of legislation that will permit the admission of women to the episcopate and the safeguarding of children and vulnerable adults.  Press releases were issued, here, and here, and we will discuss these developments in a subsequent post.

Earlier posts have reported on the review of safeguarding in Jersey, here, and here.  On 15 May, the Diocese confirmed that Dame Heather Steel DBE would be leading the Investigation into the church safeguarding complaint from 2008. As a former Judge of the Court of Appeal in Jersey and of the High Court in England and Wales (Queen’s Bench Division) she brings an insight into the jurisdictions both of the Bailiwick of Jersey and of the United Kingdom. The Investigation will make further inquiries, ascertain facts and make recommendations about whether or not a disciplinary complaint should be brought against any member of the clergy as a result of the matters raised in the Independent Review of a Safeguarding Complaint for the Diocese of Winchester (the Korris review).

The Investigation will gather and review all available and relevant evidence including (but not limited to) that considered by the Korris review. Dame Heather will also be advised and assisted in her inquiries by a police officer nominated by the States of Jersey Police. Her inquiry will feed into the Church’s inquiry currently being undertaken by Bishop John Gladwin (the Visitation, of which the terms of reference are here) to consider the wider implementation of safeguarding in Jersey and across the Diocese. Bishop Gladwin will publish his report on the Visitation later in the year, and will make recommendations for enhancing the Diocese’s safeguarding policies and procedures. Sharp-eyed readers will remember that John Gladwin was one of the two Commissaries appointed by Archbishop Rowan Williams to investigate safeguarding policy and practice in the Diocese of Chichester.

Future absence of “race” in France

The Connexion reports that France has initiated the removal of the word “race” from all legislation as demanded by President Hollande in his election campaign. He called for the word “race” to be taken out of the Constitution, saying that it had no place in the Republic. Article 1 states that:

“France is an indivisible, secular, democratic and social republic. It guarantees equality before the law for all citizens without distinction of origin, race or religion. It respects all beliefs.”

The Parti Socialiste helped vote through a Front de Gauche proposition in the National Assembly and Jean-Jacques Urvoas, president of the Laws Committee said they were making sure Hollande’s promise was not forgotten. However, Socialist MPs amended the original wording of the Front de Gauche proposal to highlight their opposition to racism, antisemitism and xenophobia.

Links to lecture and presentations

A link to the text and recording of the Richard O’Sullivan Memorial Lecture given by Lord Mackay of Clashfern on Thursday 9 May is now available on the THEOS web site.  We hope to provide a link to the abstracts of the papers presented at the LARSN Conference on 14 May in due course.

And here’s one I prepared earlier

Over the next two weeks, David will be on a walking holiday in “La Bella Toscana”, leaving Frank to hold the L&RUK fort. Whilst providing a short break from blogging 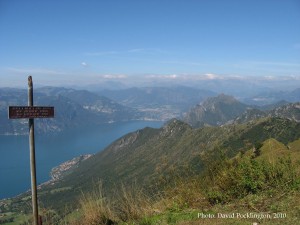 on law and religion, a couple of weeks ago an email arrived from the organizers requesting contributions to their “collection of online stories told by [its] walkers”, i.e. a holiday blog.  At 200 to 450 words, this should not prove too taxing, and an earlier contribution Vertigo in Iseo? served as an introduction to the blogosphere.

Greeted with the request Se vuol ballare? on arrival at the hotel last year makes it debatable whether to revisit the BBC’s Italianissimo language course or the Da Ponte operas.

[1] Whilst paras. 2(b) and 2(c) of Schedule 3 unambiguously refer to “married couples” and “persons who are married”, “marriage” in para. 2(1) could refer to the marriage ceremony, as in the Marriage Act 1949, but not necessarily to the institution of marriage – for which the Government’s consultation paper acknowledges there is no statutory definition. This is further confused by clause 1(3) of the Bill concerning the Canons of the Church of England.