The House of Lords gave the Marriage (Same Sex Couples) Bill a second reading without division on Tuesday.  A cross-bench peer, Lord Dear, moved an amendment to reject the Bill which was defeated by 390 votes to 148. There were fourteen bishops present and voting of whom nine supported Lord Dear’s amendment and five – the Bishops of Derby, Guildford, Leicester, Norwich and St Edmundsbury & Ipswich – abstained. The Bishop of Leicester, as Convener of the Lords Spiritual, issued a statement in which he said that, now that the Bill had been given a second reading,

“[f]or the Bishops the issue now is not primarily one of protections and exemptions for people of faith, important though it is to get that right, not least where teaching in schools and freedom of speech are concerned. The Bill now requires improvement in a number of other key respects, including in its approach to the question of fidelity in marriage and the rights of children”.

The bishops’ focus during committee and report would be to address those points “in a spirit of constructive engagement”.

Interestingly, given the internal wrangling within the Conservative Party, 66 Conservative peers supported Lord Dear’s amendment while 80 opposed it. Lord Norton of Louth provides a helpful breakdown of the voting by political grouping on Lords of the Blog. But second reading, of course, is only the prelude to what is likely to be a long, bitterly-contested committee stage. As usual, Thinking Anglicans has lots of helpful links to other comments.

The House of Commons Public Administration Committee (“PASC”) published a report on the implementation of the Charities Act 2006, concluding that the Act is critically flawed on the issue of public benefit.

The Act says that the purpose of a given function or activity cannot merely be assumed to be “for the public benefit” and therefore charitable (which was previously the position at common law: see Gilmour v Coats [1949] AC 426) but the Act does not define “public benefit”. Instead, it  puts an obligation on the Charity Commission to produce guidance on public benefit – what Lord (Robin) Hodgson of Astley Abbots, who was appointed by the Government to review the Act, described as a “hospital pass”. PASC concludes that the Commission’s recent disputes with the Independent Schools Council and the Exclusive Brethren are evidence of the weakness of the Act in that respect. (PASC might also have cited the Commission’s ill-conceived reference to the Charity Tribunal about whether or not what are generally known as “poor relations” and “poor employees” trusts were still charitable.) The Committee criticises the way in which the Charity Commission has interpreted public benefit and concludes that  it is for Parliament to determine the criteria for charitable status rather than delegating the matter to the Commission and the courts.

Which is perfectly true, so far as it goes. The problem is that when it had the opportunity to produce a proper statutory definition as the legislation was going through the Commons in 2005-06, the then Government simply chickened out. And we’re still waiting for the Commission’s revised statutory guidance on public benefit…

We reported that late in May the Government had published a Summary of Responses to last year’s consultation on the welfare of animals at slaughter. Perhaps unsurprisingly, the Summary revealed strong pressure from veterinary interests and animal welfare groups for a prohibition on all slaughter without stunning. Equally unsurprisingly, representatives of the Jewish and Muslim communities were concerned that tightening the existing rules would undermine their religious freedoms. The Government’s initial response is that the existing national rules will continue to apply.

These were David’s sentiments after a lengthy hold of BA 601 on the runway at Pisa’s Galileo Galilei airport prior to take-off. In terms of law and religion, little filtered through to La Bella Toscana either to Volterra or Massa Marìttima during the last couple of weeks.  However, elsewhere in Italy the Prefecture of the Pontifical 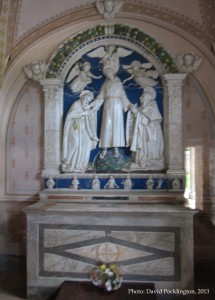 Household announced Pope Francis’ Summer Schedule; and in a break with tradition the pontiff’s residence for the summer period will continue to be the Domus Sanctae Marthae, although he will occasionally travel to Castel Gandolfo for the Sunday Angelus. The Catholic Herald notes that the summertime papal escape to Castel Gandolfo dates from the time of Pope Urban VIII, who would spend summers at the villa while he was Cardinal Maffeo Barberini. Following election as pope in 1623, he made Castel Gandolfo his permanent summer residence there, a tradition subsequently followed by about half the popes.

The article further suggests that Pope Francis’ decision is likely to have an economic effect on Castel Gandolfo (pop. 9,000) for “while its position on Lake Albano ensures summertime visitors, the loss of pilgrims coming to see the Pope at least on the Sundays of July and August”.

Archbishop Welby will make a “significant”, “short, informal courtesy visit” to Rome on 14 June, reported here.  This “personal and fraternal” meeting with Pope Francis will be followed by a more extended visit later in the year, which will provide an opportunity for Archbishop Justin to engage with various other Vatican officials. He will arrive in Rome on the Friday evening and on the Saturday will pray at the tomb of John Paul II in St. Peter’s Basilica.  The Archbishop is expected to meet with the President of the Pontifical Council for Promoting Christian Unity, the Swiss cardinal Kurt Koch, and attend an audience with Pope Francis. After this, the two will share a moment of prayer, followed by lunch in St. Martha’s House

“[t]he Church of England’s relations with British society are tense, especially now that the government is due to pass a law legalising same-sex marriage. Some are anxious to see the Queen sign the bill as this would raise questions about its legitimacy: agreeing to same-sex marriage would be a betrayal of her promise to respect the Laws of God.

The effects of the split in the Anglican Church when the Synod voted against the ordination of women bishops last autumn are still felt. Meanwhile, questions have been raised over the bishops’ decision to present the proposal again in 2015. These bishops insist that ordaining women bishops is first and foremost a theological choice and not an attempt to follow today’s trends, as many opponents claim it is.

Welby is sensitive – partly thanks to his previous role – to social questions and lost no time in siding with Catholic bishops, especially London’s archbishop, Vincent Nichols, to oppose British prime minister David Cameron’s welfare cuts and sign – along with a number of other religious leaders – the Letter to participants of the G8 summit due open in Ireland on 17 June”.

For those yet to take their summer vacation, one possible option is John Thavis’s book The Vatican Diaries: A Behind-the-Scenes Look at the Power, Personalities and Politics at the Heart of the Catholic Church, [Paperback, £6.89: Kindle, £5.99].  Thavis is the former Rome correspondent and bureau chief of Catholic News Service, and the review by Fabrizio Mastrofini on Vatican Insider promises a book “crammed with behind-the-scenes gossip” in which “the Vatican’s problems are laid bare”. It contains “[a] rich tapestry of minor but influential characters”, “packed with intriguing behind-the-scenes accounts from descriptions of papal trips … Benedict XVI’s trip to Germany … the possible beatification of Pius XII and the negotiations with traditionalists”.