On 9 September Vincent Peillon, the Minister of Education, unveiled the Charter of Secularism at School which is to be displayed in every state school in France. Its professed purpose is to remind French schoolkids of the rules for living together in the school environment and to help them understand their meaning.

The text of the Charter sets out fifteen principles, beginning with a slightly-adapted version of Article 1 of the Constitution:

“1. France is an indivisible, secular, democratic and social Republic. It guarantees equality before the law for all citizens in the whole of its territory. It respects all beliefs”.

“2. The secular Republic arranges the separation of religion and the state. The state is neutral as regards religious or spiritual convictions.There is no state religion”.

“3. Laïcité guarantees freedom of conscience to all. Each person is free to believe or not believe. It permits the free expression of convictions…”.

Under Article 6, the secular school aims to protect pupils from “all proselytism and any pressure that would prevent them from making their own choices”, while Articles 7 & 8 remind them that “secularism provides students access to a common and shared culture” and “the exercise of freedom of expression”. Article 12 declares that “no subject is excluded a priori from scientific and educational investigation” and that students do not have a religious or conscientious opt-out. Article 14 reiterates that “the wearing of signs or dress by which pupils overtly manifest a religious affiliation is prohibited.” By now you’ll have got the general drift.

The Conseil français du culte musulman has already expressed its concern that the Charter may enhance the sense of stigma and alienation in the Islamic community. Said its Chairman,

“90 per cent of Muslims will get the impression that they are covered by this policy, while in 99 per cent of cases they pose no problem for secularism. Why make a reference to the 2004 law banning conspicuous religious symbols in schools?” 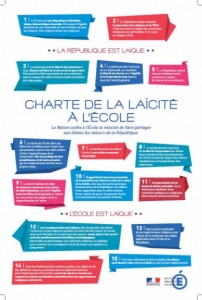 Postscript: a face-veil ban in Birmingham

The Daily Mail reported that Birmingham Metropolitan College, a Further and Higher Education institution,  had banned students from wearing face-veils for ‘security reasons’. Responses have been mixed. The Principal, Dame Christine Braddock, defended the policy on the grounds that it was necessary for security:

“We have a very robust Equality, Diversity & Inclusion Policy at Birmingham Metropolitan College but we are committed to ensuring that students are provided with a safe and welcoming learning environment … To ensure that safeguarding is a priority, we have developed our policy alongside student views to ensure we keep them safe. This needs individuals to be easily identifiable at all times when they are on college premises and this includes the removal of hoodies, hats, caps and veils so that faces are visible”.

The President of the Muslim Association of Britain, Omer El-Hamdoon, was quoted in support of the ban: in his view, women at the college had to abide by the rules:

“If you go to a bank riding a motorbike, you are required to take your helmet off and identify yourself. And when it comes to sitting exams there is also an issue surrounding identification, because the college needs to know who is sitting the paper. Some feel it goes against their freedom of expression but they should abide by the rules that are part of society”.

But some of the Muslim students see it as a personal attack. One of them told the Mail that she and her associates “… would happily show the men at security our faces so they could check them against our IDs, but they won’t let us. It’s a breach of my freedom and I feel discriminated against”. Article 9, maybe?

But, pace the Telegraph, “proposals to ban face coverings in public places” are not being “debated in Parliament”. When Philip Hollobone’s Face Coverings (Prohibition) Bill was on the Order Paper last Friday it was not debated and objected to when called over at 2.30 pm. Its chances of securing debating time are now almost non-existent.

Cite this article as: Frank Cranmer, "France, laïcité and the Charter of Secularism at School" in Law & Religion UK, 11 September 2013, https://lawandreligionuk.com/2013/09/11/france-laicite-and-the-charter-of-secularism-at-school/

4 thoughts on “France, laïcité and the Charter of Secularism at School”