Earlier this year the Church Commissioners decided that the newly-appointed Bishop of Bath and Wells should live in the Old Rectory, Croscombe, instead of at 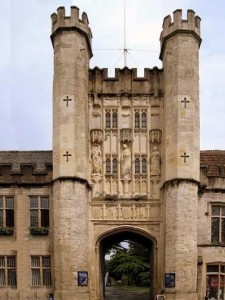 the historic Palace in Wells. In Bishop’s Council & Standing Committee of the Diocesan Synod of the Diocese of Bath and Wells v Church Commissioners for England [2014] Committee of the Archbishops’ Council (unreported), objections to the proposal were considered by a Committee consisting of Mrs Mary Chapman (in the Chair), Philip Fletcher and the Venerable Cherry Vann.

The Commissioners’ decision to relocate the Bishop’s residence was a “regulated transaction” under s 7(1)(a) of the Ecclesiastical Offices (Terms of Service) Measure 2009. Where a regulated transaction concerns the residence for a diocesan bishop, s 7(2) requires the relevant housing provider to serve notice on the office-holder concerned and on the Bishop’s Council. Under s 7(3) any person on whom such notice is served has the right to object to the transaction.

Where the Commissioners do not give notice that they consider the objection to be well-founded and send the notice of objection for consideration by the Archbishops’ Council, Regulation 16(4) provides that:

The function of the Committee appointed by the Council is to consider the substantive merits of the proposed transaction in the light of the grounds of objection and all relevant circumstances. The burden of satisfying the Committee that the objection should not be upheld rests on housing provider: in this case, the Commissioners.

This was the first occasion on which the procedure under Regulation 16(4) had had to be invoked. In the course of proceedings the Committee heard oral evidence from the parties’ representatives and their witnesses, from the Bishop in person and from the Palace Trust. It also received written representations from the Chapter of Wells and a number of letters from members of the public [paras 19–21].

The Commissioners’ duty under section 4(1) of the Measure is to provide the Bishop with accommodation which is “reasonably suitable for the purpose”. The Committee took that to mean

“… accommodation that is reasonably suitable for the purpose of accommodating the individual currently holding office as Bishop of Bath and Wells and his family. That involves taking account of any relevant considerations concerning his role and duties as bishop of the particular diocese and any relevant considerations concerning his personal circumstances” [para 27].

The Committee accepted that the Commissioners, “as those with the primary responsibility” had a margin of appreciation in determining suitability [para 28]. The Committee applied the civil standard of proof – “normally referred to as the balance of probabilities, but sometimes expressed as whether a disputed fact is more likely than not to be true” [para 30].

There were three main grounds of objection: that the proposed temporary accommodation at Croscombe was unsuitable and that no case had been made for a move (either temporary or permanent), that there had been inadequate consultation and that “the decision was damaging to the pastoral relationship between the Bishop and the diocese” [para 31]. The Commissioners argued that the apartment in the Palace at Wells did not provide “reasonably suitable” accommodation for the Bishop and that the Old Rectory did so [para 32].

In considering the matter the Committee chose to take into account the context of the relationship between the Bishop and the City:

“… it is clear to us that the City of Wells has a very particular history and identity within the Diocese of Bath and Wells. In this smallest of English cities, with a population of just 11,000, the Cathedral and Bishop’s Palace are a dominant presence in the community. The Bishop is closely associated with the city in the popular mind, notwithstanding his ministry to the whole of the diocese. His predecessors have had a residence on the site for over 800 years. Whilst very few diocesan bishops still live in a historic palace we had a strong sense that it was important to the city and the diocese more widely that the Bishop should at least live within the community of Wells and be seen to go about it” [para 33].

On the evidence before it, the Committee concluded as follows:

The Committee concluded that the apartment in the Palace was “reasonably suitable” for accommodating the Bishop [para 59]:

“For the avoidance of doubt, however, we have not, in reaching this conclusion, concluded that only the apartment in the Palace could ever provide reasonably suitable accommodation” [para 60: emphasis in original].

Though the Committee accepted that in deciding how to allocate their resources the Commissioners had to take account of their duty to make provision “for the cure of souls in parishes where such assistance is most required” and their responsibility for clergy pensions under the pre-1998 pension scheme, those were not strong arguments in the present case [paras 61-62]. However, the Committee did not accept the interpretation placed on the legislation by the Bishop’s Council that it had created a presumption in favour of the status quo:

“If the Commissioners were faced with a choice between two properties, one of which was the existing see house and both of which were found to be reasonably suitable, it would be within the Commissioners’ discretion to determine which of the two properties should be the see house. That determination might well be informed by the financial implications of the choice on their wider responsibilities” [para 62].

As to the issue of consultation, though the Committee accepted that the Commissioners were not under any statutory duty to consult on the matter and that they had, in fact, carried out some consultations with the Bishop’s senior staff, the Commissioners had not taken sufficient account of the particular context of Wells [para 65]. That said:

“We have not reached our decision on the basis of inadequate consultation: our conclusions have been reached on the merits of the decisions in question. But it seems to us that the wrong result might have been avoided had more satisfactory consultation been carried out and at an earlier stage” [para 66].

Equally, though the Commissioners had failed to anticipate the impact of their decision in Wells and in the wider diocese [para 67], the Committee’s conclusion had not been reached on the basis of any damage to pastoral relationships that may have occurred [para 69].

The Committee found for the objectors and directed that the transaction should not proceed.

As noted earlier, this was the first occasion on which the procedure under Regulation 16(2) and (3) of the 2009 Regulations had been used – which is why we thought it merited a free-standing post. Three points come to mind.

First, the Regulations do not provide for any mechanism of appeal against the decision of the Archbishops’ Council (on the recommendation of the Committee) in the case of “regulated transactions”, even though they provide for appeals to an employment tribunal by office-holders under Common Tenure.