The Islam-Ittihad Association was a non-profit-making NGO active between 1991 and 2003. Under its Charter its main aims included the repair and maintenance of abandoned mosques and other places of worship, organising pilgrimages to Islamic shrines, providing material and moral aid to orphanages, sick and disabled people and the elderly and publishing religious books. It also campaigned against drugs and alcoholism and tried to promote tolerance between different religions. 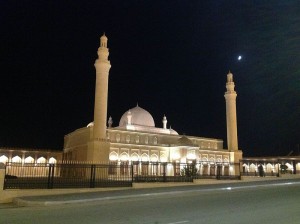 mosque in Baku and to raise the issue of the mosque in the media. They further decided to tell the public about alleged unlawfulness of the existing monopoly in organising pilgrimages to Islamic shrines and to provide pilgrims with information about the organisation of their visits. The issue of Juma mosque had been before the ECtHR on a previous occasion, when the First Section ruled the entire complaint inadmissible on grounds of failure to exhaust domestic remedies: see Juma Mosque Congregation & Ors v Azerbaijan 15405/04 [2013] ECHR and our note on Muslims, mosques, registration and dubious goings-on in Azerbaijan. In Islam-Ittihad Association & Ors v Azerbaijan [2014] ECHR 1220, the applicants returned to the matter, but on a rather different tack.

In 2002, the Azerbaijan Ministry of Justice inspected the Association to see whether or not it was operating in compliance with its Charter [14]. The inspection concluded that, generally, it was difficult to establish whether the Association was functioning as a non-governmental organisation or as a religious organisation [15]. The Ministry then warned the Association that its primary activities involved religious propaganda and agitation, pointed out that, in accordance with the Law on Non-Governmental Organisations (Public Associations and Funds), public associations were not allowed to engage in religious activities and told it to stop doing so: “any religious activity on the part of your association is unlawful” [16].

The Association replied that it had run numerous social programmes and activities supporting the establishment of a civil society and the promotion of human rights. It denied any involvement in religious activities, pointed out that, in any case, the legislation did not provide any precise definition of what constituted a “religious activity” [17].

After further exchanges, in 2003 the Association was closed down by order of the Sabail District Court and a series of appeals – ultimately to the Supreme Court – was unsuccessful. Before the First Section the Association complained that its forced closure had violated its rights under Articles 6 (fair trial), 10 (expression) and 11 (assembly and association) ECHR.

The First Section decided that it was an Article 11 issue. There was no dispute that the Association’s dissolution had interfered with the right to freedom of association. But whether or not it was “prescribed by law”, pursued one or more legitimate aims under Article 11 §2 and was “necessary in a democratic society” was another matter [42].

The expressions “prescribed by law” and “in accordance with the law” in Articles 8 to 11 were not merely about the basis of the impugned measure in domestic law but also about the quality of the law in question: the law had to be

“… accessible to the persons concerned and formulated with sufficient precision to enable them – if need be, with appropriate advice – to foresee, to a degree that is reasonable in the circumstances, the consequences which a given action may entail” [43].

Therefore, domestic law had to afford a measure of legal protection against arbitrary interference by public authorities with Convention rights.and had to

“… indicate with sufficient clarity the scope of any such discretion and the manner of its exercise … [though] … the level of precision required of domestic legislation depends to a considerable degree on the content of the instrument in question and the field it is designed to cover” [44].

The domestic courts had ordered the Association’s dissolution because it had engaged in religious activities. The basis for the order of the domestic courts was that the Association had the status of an NGO; and Article 1 of the Law on Non-Governmental Organisations stipulated that that Law did not apply to “religious organisations”. “Religious organisations” were defined elsewhere: in Article 7 of the Law on Freedom of Religion. But neither statute provided any kind of definition of  “religious activity”[48].

The lack of any definition of “religious activity” made it impossible for the applicants to work out what they needed to do in order to comply with domestic law [51] Therefore, the condition of foreseeability was not satisfied and the interference was not “prescribed by law”. There had accordingly been a violation of Article 11 [51 & 52] but there had not been any violation of Article 6 [54].

So where is Article 9 in all this? Presumably, because the Association was arguing that it was not indulging in “religious activity” (or, at any rate, that given the uncertainty of the law it had no way of knowing whether it was indulging in it or not) it could hardly plead Article 9 at the same time.

As to the underlying issue, in Juma Mosque Congregation & Ors v Azerbaijan 15405/04 [2013] ECHR the Becket Fund for Religious Liberty, which assisted with that application, argued that the congregation of the mosque was targeted by the authorities because İlqar İbrahim oğlu Allahverdiyev, its leader, was a prominent democracy and religious liberty activist and the congregation would not agree to replace him with a Government-appointed imam.

The International Religious Freedom Report for 2013 issued by the Bureau of Democracy, Human Rights and Labor within the US Department of State was very equivocal indeed about the state of religious rights and freedoms in Azerbaijan. The suspicion is that the Juma Mosque case and the suppression of the Association might together be part of a more general issue about democracy and human rights, not least because in both cases the applicants were represented by Professor Bill Bowring.

(Incidentally, the original complaint was filed in January 2005: a stark illustration of the size of the ECtHR’s backlog of unresolved cases.)