The shootings on Tuesday at the Paris office of French satirical weekly Charlie Hebdo put everything else into a very distant perspective indeed; and there is little we can usefully say except to express our condolences with the bereaved and our horror at the futility of such attacks. But though the incident underlines the overwhelming need for people of all faiths and none to learn to live together in mutual respect, at the same time it illustrates the danger of ill-considered reactions.

David Davies, Conservative MP for Monmouth, distinguished himself by asserting that “Under current laws, including the Human Rights Act, anyone can come to the UK and make a claim for asylum”. As Adam Wagner points out, the right to claim asylum stems from the 1951 Convention and the 1967 Protocol Relating to the Status of Refugees, not from the Human Rights Act 1998. The United Kingdom signed up to the 1951 Convention on 28 July 1951 and no-one has seriously proposed withdrawing from the Convention and Protocol – yet.

Nor is this is just a bit of academic lawyers’ nit-picking. Mark Elliott, at Public Law for Everyone, suggests that Davies’ reaction is “symptomatic of the impoverished nature of public debate in relation to human rights law generally and the HRA and the ECHR in particular” and that atrocities like the Charlie Hebdo killings “often provide a convenient peg upon which to hang illiberal legislation”. We agree; and it is pretty clear that the low standard of public debate about rights vs responsibilities is not going to be elevated by people peddling inaccuracies, however strongly they may feel about the issues. You can follow the subsequent row in Huffington Post.

No Roman Catholic bishops in the Lords?

“Over the Catholic Church’s long history, it has discovered that mixing clerical and legislative offices can lead to problems. There are many famous examples where the seduction of temporal power diminished and obscured the pastoral mission of ordained ministers, or where the Gospel suffered instrumentalisation at the hands of passing ideologies. The Catholic Church instead challenges its laity to enter the public sphere and to work through a variety of political parties and structures to see Christ’s teaching reflected in public life. As Catholic politicians, we believe that is the right way to go.”

As usual, we have been here before: in 2009 there was widespread speculation that the then Prime Minister, Gordon Brown, wanted to recommend a life peerage for the retiring Archbishop of Westminster, Cardinal Murphy-O’Connor.[1] It was pointed out, however, that the Cardinal would only be able to accept a peerage by special dispensation of the Pope because canon law normally forbids clergy from occupying positions that involve the exercise of political power.

That said, however, there is very little in Parliamentary or constitutional history completely without precedent. When Baroness Vaux of Harrowden died in 1958 she was succeeded by her son: better-known as Dom Gabriel Gilbey OSB, the 9th Baron was a choir-monk of Ampleforth. Nevertheless, he duly took his seat – the first Benedictine to do so since the Reformation – and occasionally spoke in the House. He died in 1977.

Too many red hats in Rome?

At the Angelus on 4 January, Pope Francis announced the names of the new cardinals who to be appointed at the consistory on 14 February next: 15 of the new cardinals come from 14 countries on every continent, “[showing] the inseparable bond between the Church of Rome and the particular Churches present in the world.”  In addition, 5 archbishops and bishops emeriti “distinguished for their pastoral charity in service to the Holy See and the Church” will also join the College of Cardinals.  On the two preceding days, the Pontiff will hold a consistory with all the cardinals “to reflect on the guidelines and proposals for the reform of the Roman Curia”.

is highly critical of the number of cardinals appointed which will exceed the maximum of 120 set in Universi Domini gregis (1996) n. 33.  He uses the “little point” that Francis has appointed five more papal electors than canon law authorizes as an example of the “large point”: antinomianism (ignorance of, disregard for, and sometimes contempt toward, law) is so pervasive in the Church (and in the State, for that matter) that almost no one notices it any more.

Another perspective is given in John Thavis’ post New cardinals from the church’s ‘periphery’ which provides an insight into the significance of the new appointments, which in common with St John Paul II, were designed with a view to continuing  Pope Francis’ legacy.  Given the Pope’s known frugality, however, we wonder whether like Cardinals in the past, this new batch will each be spending the estimated €4,000 to €5,000 at Gamarelli on the associated “tat”.

Monday’s post from Colin Coward explores the potential consequences of the appointment of women bishops in Kenya on GAFCON, and the wider implications for  divisions within the Anglican Communion on human sexuality.

In last week’s round-up we mentioned that there had been complaints from Irish atheists and secularists that the Government appeared to have dropped plans for a referendum during the lifetime of the current Dáil on the Constitutional Convention’s recommendation that the offence of blasphemy be removed from the Constitution . Now comes a report in the Irish Examiner suggesting that they – and we – may have been premature. Junior justice minister Aodhán Ó Ríordáin told RTÉ radio that it was his “expectation” that the promised referendum would take place in the second half of this year:

“It would seem strange… to have all these decisions made by the Constitutional Convention, and not have a referendum to take place … We’ve prioritised the marriage equality referendum for the first half of this year. It’s my expectation that in the second half of this year a number of referenda will take place and blasphemy will be one of them.”

[With thanks to Paul Colton for the lead.]

The Local Government (Religious etc. Observances) Bill had a brief Commons committee stage on Tuesday. The Bill seems to be largely unopposed: it emerged from  the Public Bill Committee unamended and no member spoke against it. (Which, in Frank’s view at any rate, is rather unfortunate: whatever view one takes of the National Secular Society’s objections to the Bill, in a mature democracy surely it is proper that all sides of a political argument should be fully articulated.) 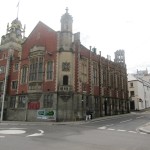 In addition to addressing “prayers (undefined) and other observances”, the Bill includes “involvement with religious events and events connected with a belief”, since “if left unchallenged, the High Court judgment as it relates to Bideford council could mean that no local authority could be represented at any event with a religious element. That could put at risk some of our most important traditions, such as the laying of a wreath on Remembrance Sunday on behalf of a local authority.”

Subject to certain limitations, it extends these provisions to a number of bodies ranging from the London Fire and Emergency Planning Authority to “an internal drainage board for a district neither wholly nor partly in Wales”. The Bill returns to the Floor of the House on Friday 16 January.

Composition of the Lords Spiritual

Sir Tony Baldry (Banbury) (Con): … Will my right hon. Friend confirm that the intention is that if the Commons can cover all stages of the Bill on 19 January there will be time in the other place for the Bill to be passed and enacted during this Parliament so that we can see women bishops in the House of Lords as soon as possible?

Leader of the House of Commons (Mr William Hague): … it is very much the intention that it will be possible for the Bill to receive Royal Assent before the dissolution of Parliament. We would not have introduced it with any other expectation. I am pleased that we have been able to introduce it speedily and I hope that we will be able to consider it speedily, and that they will be to do so in the other place as well.”

Same-sex relationships and the Kirk

Now that a majority of presbyteries has assented, the final decision will be made at this year’s General Assembly in May.

The Watch Tower Bible and Tract Society, governing body of the Jehovah’s Witnesses, has appealed to the First-tier Tribunal (Charity) against the Charity Commission’s decision to open a statutory inquiry into various issues within the denomination. The Commission announced in June 2014 that it was looking into a number of issues, including the administration, governance and management of the charity and its safeguarding policies. It had been alerted to concerns about the way in which a congregation in Manchester was alleged to have dealt with a former trustee who had served nine months in prison for the indecent of assault of two girls. In June the Commission also opened a statutory inquiry into the Manchester congregation; and the congregation’s trustees lodged an appeal [HG/1065201/C -380518] against that inquiry in July which is to be heard in March.

According to Third Sector (£), Watch Tower lodged its appeal [CA/2014/002] on 22 December and the Tribunal’s directions document issued on 23 December stated that the appeal might be out of time. It gives the Commission until later this month to tell the Tribunal what information it gave Watchtower about its right of appeal after it had decided to open the statutory inquiry.

Preston Down: the aftermath

Given the number of page-views generated by our previous posts on the Preston Down Trust (PDT), readers may be interested to learn that, according to Third Sector (£) almost 60 congregations of the Plymouth Brethren Christian Church have now been registered as charities in the year since the Charity Commission agreed to register the PDT. According to Third Sector, a spokeswoman for the Commission said that because each congregation was a separate charity, each application was considered on its own merits, but with reference to the PDT decision:

“Plymouth Brethren Christian Church applications for charity registration are subject to the same requirements as any other – the registration resources available from our website set those out … Our assessment is as thorough as for any other application, and the factors set out in the decision on the Preston Down Trust inform the registration decision.”

She also said that said the Commission hoped to hold a meeting with the PDT trustees in January but gave no further details as to the reasons for the meeting. Presumably the intention is to monitor compliance with the PDT’s revised governing document.

[1] See for example, Catherine Pepinster’s interview with Gordon Brown: ‘Our common cause’: The Tablet 28 March 2009.

[2] Frank reckons he must be about the only person currently blogging who is utterly and completely uninterested in the Richard III saga.