New laws, new bishops and a very late king. All in all, quite a busy week and an eventful, if grubby, end to the present Parliament

On Thursday 26 March, we posted A couple of constitutional snippets indicating: Parliament had been prorogued and would meet again on Monday 18 May; and the provisions of the Succession to the Crown Act 2013 had come into force. In addition, the Lords Spiritual (Women) Act 2015  received Royal Assent on 26 March and under section 2(1) will come into force when the new Parliament meets on 18 May. The Church of England issued a press release stating that under the terms of the Act, the Venerable Rachel Treweek, Archdeacon of Hackney, announced today as the next Bishop of Gloucester, will become the first female diocesan bishop to join the Bishops’ Benches in the House of Lords. Archdeacon Rachel will take the place vacated by the Bishop of Leicester, Tim Stevens, who retires on July 11. She will be introduced into the House of Lords after the summer recess.

Another item with constitutional implications was the publication on 26 March of the Supreme Court judgement R (Evans & Anor) v Attorney General [2015] UKSC 21 in relation to letters from the Prince of Wales to members of the Government. In addition to ruling that such letters were not confidential under the provisions of the Freedom of Information Act 2000:

“section 53 FOIA 2000 does not permit the Attorney General to override a decision of a judicial tribunal or court by issuing a certificate merely because he, a member of the executive, considering the same facts and arguments, takes a different view from that taken by the tribunal or court.”

Amid all this excitement, we should not forget that on the previous day, Number 10 announced that the Queen has approved the nomination of Reverend Canon Alison Mary White, for election as Bishop of Hull in the Diocese of York.

“open for business from 09:00 on Wednesday 25 March 2015 … From this point onwards, registrants will be able to access the registration process, complete a return and join the Register of Consultant Lobbyists. Once the Register is in place, the prohibition on carrying the business of consultant lobbying without being on the Register will be in effect.”

It is very unlikely that anyone other than a commercial consultant lobbying firm (one of which Frank works for) that lobbies on behalf of clients in return for payment will have to register. In-house lobbyists, such as those in David’s former role, are not subject to the registration requirements, nor are any consultant lobbyists employed by them unless it is the consultant lobbyist who has direct contact with the Minister or equivalent. The Registrar herself is reported as commenting that the new law had been “very narrowly drafted” and that she expected “quite a low level” of applicants when registration opened. Much the more difficult aspect of the 2014 Act from the point of view of faith-groups is the provisions on third-party campaigning at election time, on which we have posted on a number of occasions.

This year the Law and Religion Scholars Network (LARSN) Conference will be held at Cardiff Law School on Monday 11 May 2015 and, as in previous years, there will be a number of presentations given on topics within law and religion, followed by an opportunity for questions. Booking forms are available from Sharron Alldred (Alldred@cf.ac.uk) to whom they should be returned by no later than Monday 6th April. There is an attendance fee of £25 payable on arrival, and those wishing to give presentations, (10 minutes length, 5 minutes for questions), should submit their title and an abstract of no more 200 words for consideration to Revd Dr Helen Hall (HallHP@cardiff.ac.uk) by no later than 5.30pm (UK time) on Monday 6th April.

Prior to the Conference will be a Law and Religion Current Issues Seminar at St Michael’s Theological College, Cardiff, from 2pm to 5.30pm on Sunday 10th May 2015. The current issues seminar will take the form of a series of discussions, each kicked off by a short presentation about a current landmark publication in the field of law and religion. The attendance fee is £5 payable on arrival. Those wishing to attend should email Helen Hall, who is coordinating both events.

We noted General Municipal and Boilermakers Union v Henderson (Unfair Dismissal) [2015] UKEAT 0073 14 1303, about the unfair dismissal of a Regional Organiser of the Union, allegedly for his left-wing socialist views. In her judgment Simler J observed [62] that the lower tribunal had concluded that left-wing democratic socialism was a protected belief for the purposes of the Equality Act 2010 and that that  conclusion had not been challenged on appeal. The core issue of the extent to which purely party-political opinions are protected, as opposed to political philophies, therefore remains an open question. But we can see circumstances in which it may be very difficult to distinguish the one from the other.

… was duly reinterred in Leicester Cathedral on Thursday and barely a single dressing-up box went unransacked. One tweet referred to him as “His Late Majesty King Richard III” – to which, surely, the only response can be that after more than 500 years he’s not so much late as a complete no-show. But perhaps the Archbishop Cranmer blog hit the nail (for want of which etc…) on the head: Horrible Histories meets Monty Python. We note that Her Majesty didn’t attend “It’s a Royal Knockout” either.

Aside from the issues associated with Richard III’s coffining and reburial, which have 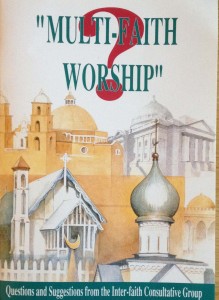 occupied the readers of the Catholic Herald and others over the past few months, more serious multi-faith concerns were raised by the inclusive jummah salah held at St John’s Waterloo on 6 March 2015. We considered the extent of the present legal constraints in our post on 25 March in which we concluded that the current polarization of opinion suggests that the formal position of the Church has not advanced much further since its guidance paper “Multi-Faith Worship” was produced in 2008. Should it do so, however, there are a number of legislative measures that will need to reconsidered.

A sneak preview of the highlight of the month – the thrills and spills of the Church’s consistory courts with our March round-up including: a pyrrhic victory for the Victorian Society; reiteration of the Church’s response to disability legislation; a reportedly disingenuous incumbent; and perceptions on the importance of the professional accreditation of proposed contractors. Watch this space.

Which is not quite the same thing at all: for example, what about Edinburgh? It must be a serious candidate for the title of most beautiful large city in the UK, it happens to have two cathedrals – St Mary’s Scottish Episcopal, Palmerston Place, and St Mary’s Roman Catholic – and, though it’s no longer a cathedral, there’s also the mediaeval High Kirk of St Giles. Nor was another likely candidate, Oxford, on the Telegraph list: maybe they just didn’t realise that Oxford has a (mediaeval, Anglican) cathedral.

The piece seemed to exemplify what the late, great Adrian Hastings characterised in The Shaping of Prophecy as sloppy thinking “bewitched by the unanalysed mirage of a triangle consisting of Nation-State, National Church, Established Church”. Which is pretty harmless in a Telegraph travel piece: but (as we have observed before) not quite so harmless when academics and politicians who really should know better start confusing such things – as they not infrequently do.