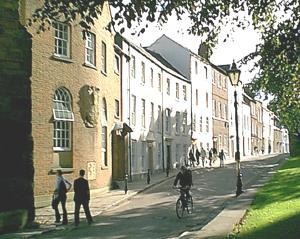 I was shocked and immensely saddened to learn of the sudden death last week of Joe Cassidy, Principal of St Chad’s College, Durham, and I hope readers will forgive this strictly personal reflection by an alumnus and Fellow of the College that has absolutely nothing whatsoever to do with law (though quite a bit to do with religion).

The Revd Canon Dr Joseph Patrick Michael Cassidy, known to generations of Chad’s students simply as ‘Papa Joe’, was a Montrealer (who was slightly miffed when people with tin ears for accents mistook him for an American). A social ethicist whose particular specialism was the thought of the Canadian Jesuit theologian Bernard Lonergan, Joe was born a Roman Catholic, joined the Society of Jesus and was ordained priest.  As Jesuits do, he collected degrees like other people collect beer-mats or Dinky toys (he had seven) and was reckoned to have the longest string of post-nominals of any member of the University. After a career that included teaching in Canada and a spell in Nicaragua, he came to England to lecture at La Sainte Union, Southampton, was subsequently received into the Church of England and in 1997 became Principal of St Chad’s.

La Sainte Union had had intractable problems of its own, culminating in 1997 in the loss of its OFSTED accreditation for teacher training and its incorporation into Southampton University but, even so, when Joe’s appointment was announced an editorial in the Times Higher Education Supplement under the strap-line Self immolation? wondered whether he “might be jumping from the frying pan into the fire”. The situation which greeted him on his arrival at Chad’s was horrendous: the auditor had described the balance-sheet as “financial meltdown”, some of the older buildings were in serious disrepair and the future was very uncertain indeed.

Joe’s time at Durham can be summed up very simply: he saved the College. By the time of his death, student numbers had expanded and included a strong postgraduate contingent, finances were on a stable footing, the buildings had undergone major refurbishment and expansion, the College’s independent academic research was flourishing and Chad’s was second only to University College in the ratio of applicants to places.

As Michael Sadgrove, Dean of the Cathedral and Rector of the College, suggested in his recent appreciation, though academic success was very important to Joe, people were much more so. He believed very strongly that a college should be “a living community of human beings in which people care about one another so that everyone can flourish”. As anyone connected with Chad’s will tell you, Joe succeeded in that aim beyond expectations – and will be much missed. Our thoughts are particularly with Gillian and their children: but everyone connected with the College will share their sense of loss.

Walter Awlson’s website has a good copy of his portrait of Joe that hangs in Hall.