The election campaign grinds on remorselessly and there’s still over three weeks to go. For those who haven’t yet lost the will to live, here’s the roundup…

Disposing (or not) of fonts

We noted the decision in the recent judgment in Re St Peter Shipton Bellinger [2015] Winchester Cons Ct, in which the Chancellor granted a faculty for the removal of a Victorian font against the objections of the Victorian Society. On Thursday, however, The Telegraph reported “Church rector in unholy battle over ‘showy’ Victorian font.” The article states “[a] leading conservation group is gearing up for a head to head confrontation with a Hampshire rector and his church wardens in a court battle to save an ornate 134-year-old Victorian font possibly ending up buried in the church yard”, ignoring the statement of the chancellor that “burying the font in the churchyard should be regarded as very much a last resort” [26].

What surprised us in the judgment was the Chancellor’s description of the font as “not unattractive”, whereas those with different aesthetic sensibilities might have suggested it was “downright ugly”. It is also a mystery how anyone might have suggested that a feature that “dominates the west end of the building and “towers over the nearest pews” [19(c)] could be regarded as a trip hazard” – but perhaps there is local evidence to the contrary.

The Telegraph also carried an item under the infantile heading “Vicar told thou shalt not go into a bar wearing sandals”, which indicates that the Revd Andrew Dotchin “was ‘gobsmacked’ after being told he was banned from going into his local wine bar because of his footwear … for health and safety reasons because a glass could fall on his foot and break a toe. The wine bar manager defended the decision to bar the priest saying “[u]nfortunately it’s because we are a glass-led venue [what??] – a lot of venues in Ipswich use glass substitutes now. All it would take is someone to drop a glass on an exposed foot – that was our concern.”

We would recommend that Andrew Dotchin contact Judith Hackitt’s Myth Busters Challenge Panel which “will look into enquiries regarding the advice given by non-regulators such as insurance companies, health and safety consultants and employers and, quickly assess if a sensible and proportionate decision has been made. We want to make clear that ‘health and safety’ is about managing real risks properly, not being risk averse and stopping people getting on with their lives.” Alternatively, it is probably time to amend Frank’s proposed Worship and Doctrine (Amendment) (Polished Black Shoes with Cassock) Measure to include all clerical dress.

But enough of this drivel: we’re off to a glass-led venue for a pint…

In Wasteney v East London Foundation NHS Trust an occupational therapist lost her claim over disciplinary proceeedgins for three charges of misconduct – praying with a Muslim colleague, giving her a book about a Muslim woman who converts to Christianity and inviting her to church events. She had been suspended on the grounds of “gross misconduct” and after a hearing in February 2014 had been given a final written warning. It was later reduced on appeal to a first written warning. She returned to work in March 2014 but alleged that the “hostility” that she had subsequently encountered had pressured her into leaving the John Howard Centre in Homerton, the secure hospital for mentally ill patients where she had been working, and moving instead to the Trust’s headquarters.

This week it was announced that she was taking her case to an Employment Appeal Tribunal, claiming that the outcome of the disciplinary proceedings had breached her rights under Article 9 ECHR.

The Mirror reports the case of Ian Harris, a member of the Church of the Flying Spaghetti Monster, aka the Pastafarians, who wants to wear his “religious headgear” – a colander – in the photograph for his driving licence. The DVLA has already refused one such photograph but he has sent off a fresh one, still wearing the colander. The Mirror quotes him as follows:

“I’m fighting for the right to have my religious headgear shown on my photo. I don’t understand the DVLA should be able to discriminate whether my religion is valid. I have a spiritual connection with the Flying Spaghetti Monster: until they have brain probes how are they going to say I don’t? Our religion is a minority but the DVLA is discriminating because it allows people who practice [sic] major religions to wear headgear in pictures.”

The DVLA says that headgear is generally unacceptable in licence photographs but may be permitted on religious or medical grounds. Exemptions are dealt with case by case; and hijabs and Sikh turbans are allowed. So it’s back to “what is a religion?” and the “cogent, serious and important” test…

In Theresa May, the Home Office and sharia we commented on the Home Secretary’s speech to the Foundation for Peace in which she announced that the Government (assuming it wins the forthcoming General Election) will commission a study of the impact of sharia law in England and Wales. On the same theme, crossbencher Baroness Cox has authored a new Bow Group pamphlet, ‘A Parallel World – Confronting the abuse of many Muslim women in Britain today’ which suggests that

“while many will … welcome Theresa May’s commitment yesterday to conduct an independent review of sharia courts, it is imperative that such measures are not so broadly defined that they catch innocent behaviour or impact on people’s religious liberties.”

In addition to announcing her intention to reintroduce her private Peer’s bill – the Arbitration and Mediation Services (Equality) Bill – in the next parliamentary session, she called on government to launch “a judge-led inquiry to determine the extent to which discriminatory sharia law principles are being applied within the UK”. We would reiterate our earlier comments that

“if there is indeed a particular problem with sharia councils then it obviously needs to be addressed: but to do so will require very careful policy formulation and drafting so as to avoid either religious discrimination against Muslims, contrary to Article 9 ECHR, on the one hand or having to regulate the religious tribunals of other faith communities on the other.”

And, pace Bs Cox, the Westminster Government is not responsible for family law or the law of succession in Scotland or Northern Ireland. And Scotland has its own arbitration legislation: the Arbitration (Scotland) Act 2010.

As a result of the Treaty of Lausanne, the Turkish minority in Thrace was given special status within the Greek state – including the right to follow sharia in matters of family law and succession. Under the current arrangements, the Greek authorities appoint three muftis to act as sharia judges.

The Guardian now reports that a Muslim woman, Chatitze Molla Sali, is appealing to the ECtHR against a ruling of the Supreme Court that sharia must apply to members of the Muslim minority and that matters of inheritance involving must be settled by the mufti – with the result that her late husband’s will was overturned and she lost part of her inheritance. Presumably her lawyers are arguing Article 8 (private and family life) and A1P1 (property). The case is unlikely to be decided before 2017: watch this space…

For the past few weeks the issue of state legislation on so-called restoration of religious freedom has been exercising US legal academics and media commentators. For reasons we’ve already explained, we tend not to take very much notice of US law and religion issues; however, in what has been rather a quiet week for domestic and European news we thought the latest controversy worth a mention.

As David B Rivkin Jr and Elizabeth Price Foley explain in a recent article in the Wall Street Journal, the federal Religious Freedom Restoration Act 1993 (RFRA) was a reaction to the Supreme Court’s decision in Employment Division v Smith 494 US 872 (1990), which held that the Free Exercise Clause of the First Amendment did not permit a religious exemption from laws of general applicability such as a prohibition on drug use, even if those laws substantially burdened religious exercise. The state could therefore deny unemployment benefits to a person sacked for violating a state prohibition on the use of peyote even though it was used as part of a religious ritual. The federal RFRA law supplanted Smith, declaring that the state could substantially burden religious exercise only if there was a “compelling” government interest for doing so and it used the “least restrictive means” of furthering that interest.

Arkansas and Indiana recently enacted their own domestic RFRAs amid a degree of controversy. On 2 April Howard Friedman posted on the last-minute amendments to the Arkansas and Indiana legislation. There is further background information in his article in the Washington Post: 10 things you need to know to really understand RFRA in Indiana and Arkansas.

… on a funereal theme, the Ecclesiastical Law Society reminds us that there are 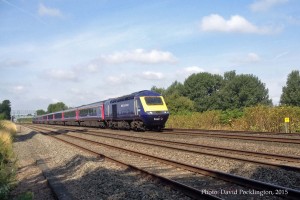 still a few places left for its Annual Conference, “Funerals, Burials and Churchyards”, to be held at the Bristol Marriott Hotel, Friday 17 to Sunday 19 April. [That’s the good news: the bad news is that Frank is giving a paper.] Booking details here. Delegates travelling by First Great Western would be advised to check their journey times in view of the diversions/bus replacements as a result of the electrification programme. It may also be prudent to check the direction of travel during the journey in case there is a repetition of the problem on Monday: the BBC reported that a FGW driver and train manager boarded the train at Banbury(?) and proceeded to take the passengers back in the direction they had just come from. Buon viaggio!