Succession to the Crown Act

In his post, The Succession to the Crown Act 2013 has landed, published on the UCL Constitution Unit’s website and cross-posted by L&RUK here, Bob Morris offers an overview of the Act and explains why it has taken so long to come into effect. He concludes that whilst the fifteen other Commonwealth states with which the UK shares its monarchy have become independent of the UK, the UK has not become independent of them. Not what decolonisation was thought to be about but it is what – in these aspects at least – we have got. Accordingly, it is partly for religious reasons that the UK consented to continuing monarchical forms in certain independent states rather than in others at the cost of some of its own constitutional freedom, and we are reminded of this by the Succession to the Crown Act 2013.

Under the strapline “scrap the Human Rights Act and curtail the role of the European Court of Human Rights, so that foreign criminals can be more easily deported from Britain” the Conservative Manifesto declares that a future Conservative Government

“… will scrap the Human Rights Act, and introduce a British Bill of Rights. This will break the formal link between British courts and the European Court of Human Rights, and make our own Supreme Court the ultimate arbiter of human rights matters in the UK.”

Following its meeting in London from 13th to 17th April 2015, “for prayer and fellowship in order to help chart the future of global Anglicanism” GAFCON announced that it was “uniting faithful Anglicans, growing in momentum, structured for the future, and committed to the Anglican Communion”, and issued A Communiqué from the GAFCON Primates Council. In addition to announcing that its next conference would be held in 2018, (i.e. the year which following the 10-year cycle, the Lambeth Conference would have been held) it commented:

“FCA UK & Ireland, (Fellowship of Confessing Anglicans) formed at our initiative, continues to welcome and provide support for faithful Anglicans in the British Isles. We are particularly concerned about the Church of England and the drift of many from the Biblical faith. We do not regard the recent use of a Church of England building for a Muslim service as a minor aberration. These actions betray the gospel and discourage Christians who live among Muslims, especially those experiencing persecution.”

“The truth is that while all this nonsense goes on, the rest of the Church of England will continue to focus on being faithful to its gospel vocation and mission. We are doing it every day. We will not be distracted by people who selectively report, regularly misrepresent, manipulate truth and plough their own furrow. God bless them in their commitment to the gospel of Jesus Christ; and God bless the rest of us in our commitment to the gospel of Jesus Christ.

We continue to support our fellow Anglicans all over the world, many of whom tell us that they have no time for Gafcon. Some face dreadful challenges and we stand with them. Some face real persecution and we stand with them. The great power of the Anglican Communion lies in these relationships of mutual prayer, learning, fellowship, mission and support – and they cannot be bought to promote the power games of a few.”

In response to media coverage of Lord Neuberger’s lecture “Fairness in the courts,” a Supreme Court spokesman said:

“Following various media reports based on a lecture he gave last week, Lord Neuberger would like to emphasize that he did not say that Muslim women should be allowed to wear a full-face veil while giving evidence in court.

“His lecture was aimed at encouraging judges to develop a greater understanding of the perspectives of those less experienced in the criminal justice system, especially when faced with having to give evidence or face cross-examination.

“Lord Neuberger mentioned a number of examples of cultural and religious views and practices which might lead some people to find such an experience intimidating, but made it clear that the court’s primary duty is to establish the truth and determine cases fairly.”

The full lecture can be read here. The Supreme Court has written to the editors of the national newspapers which carried inaccurate stories with a letter for publication.

On 27 March we reported that the Churches’ Roof Repair Fund grants had been announced and a total of 372 CofE and 130 other places of worship will receive between £10,000 to £100,000 to meet the costs of urgent repairs to roofs and rainwater disposal systems. A further £25million has set aside for a second round that will open later in 2015, and other sources of funding include the Heritage Lottery Fund, a government-sponsored fund administered by the National Heritage Memorial Fund on behalf of the Department for Culture, Media and Sport. 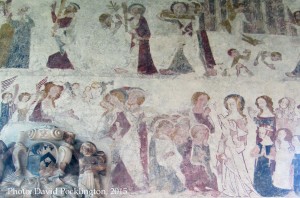 One fortunate recipient of HLF funding is St Mary, Chalgrove, Oxon, which has received £544,900 towards £1M project to restore and preserve its unique set of medieval wall paintings; the work is planned to start on 1st June and the church will be closed for eight months. On 19th April there was an open day to see the displays and sample work of the refurbishment plans. For those not able to attend, a virtual tour is possible using Oxfordshire Churches in 3600 .

One less fortunate bid for funds for roof repairs was made by the Dean of Wakefield, the Very Revd Jonathan Greener, who placed a £50 charity bet each-way on an apparently aptly-named racehorse, Godsmejudge, at a Ladbrokes opposite his Cathedral in Wakefield, West Yorkshire. Unfortunately, the judgement delivered was anti-gambling, and Godsmejudge came in an also-ran.

Equally unpredictable was the £1.5M sent to Bath Abbey, allegedly “in a plain brown envelope”, as a contribution to its restoration fund, which is aiming to raise £19.3M to repair the collapsing floor, install heating powered by the Bath thermal springs, and expand the building, here. The Abbey was awarded £10.4million of Heritage Lottery Funding, with the proviso that matching funding of £7.1million was to be raised by the end of the year. With the £1.1million dontation from the congregation and charity Friends of Bath Abbey, this leaves £4.5 million to raise from a combination of grant-making trusts and foundations, plus individual donations.