An eclectic mix, from clergy employment to long skirts in the Ardennes and swingers’ sex clubs in Nashville…

The Succession to the Crown Act 2013 has landed …

The recent guest post by Bob Morris began: “At practically the last gasp of the now dissolved Parliament, the bringing into force of the Succession to the Crown Act 2013 was announced by the Deputy Prime Minister Nick Clegg in his capacity as Lord President, on Friday 26 March 2015 [Hansard, Lords, HLWS483].” Although a little over a month before the birth of a daughter to the Duchess of Cambridge on 2 May, the timing of the birth was immaterial since the Succession to the Crown Act 2013 was made retrospective to 28 October 2011 – the date of the Commonwealth Heads of Government Meeting agreement – to allow for the delay in implementing the change to the law.

On 4 May, Kensington Palace reported that the Duke and Duchess of Cambridge have named their daughter Charlotte Elizabeth Diana, and she will be known as Her Royal Highness Princess Charlotte of Cambridge; she will be fourth in line to the throne, above HRH Henry of Wales (“Prince Harry”). The new Princess would have assumed the same position in the succession order under the former provisions, but now cannot be moved down the list should William and Kate have another male child in the future. However, the birth will have an immediate effect on HRH Princess Beatrice of York, who at 7th in the line of succession to the Crown, now no longer requires the consent of the Queen before marrying under section 3(1) of the Act.

In line with tradition, the official notification of the birth of a daughter took the form of a typewritten note in a wooden frame and placed on an easel outside Buckingham Palace. The notice was carried through the Privy Purse door of the Palace just after 12.30pm. It read: ‘Her Royal Highness The Duchess of Cambridge was safely delivered of a daughter at 8.34am today. Her Royal Highness and her child are both doing well’. Royal Central reports that it was signed by the medical team that attended the Duchess, but apart from those signatures the only handwritten parts of the note were the time of the baby’s birth and the word ‘today’. A photograph of the easel was posted on Twitter by @BritishMonarchy here.

On Thursday the Court of Appeal handed down judgment in Sharpe v The Bishop of Worcester [2015] EWCA Civ 399, unanimously reversing the decision of the EAT and restoring the ruling of the Employment Judge. The Court held that the office of a freehold incumbent was “governed by a regime which is a part of ecclesiastical law. It is not the result of a contractual arrangement”. It also pointed out that the element of control necessary for there to be an employer/employee relationship was not present. Which is what we had always assumed; and we still cannot understand how the EAT came to the contrary view. Russell Sandberg has provided a long analysis: Not a Sharpe Turn: a note on Sharpe v Bishop of Worcester.

As to employment matters and religion more generally, Frank has just posted an updated version of his note on Case-law on Churches, religion and employment on the public part of the CLAS website, taking account of Sharpe and Wasteney v East London NHS Foundation Trust [2015] ET 3200658/2014. Given that it is a very fluid and difficult area – and that he is not a specialist in employment law – he would be very grateful indeed for constructive comments or corrections.

The Scottish Parliament’s Health and Sport Committee has been considering the Assisted Suicide (Scotland) Bill, a Member’s bill brought forward by the Green MSP Patrick Harvie. A majority of the Committee opposes the general principles of the Bill; and the Committee is reported as having concluded that it “significant flaws”. The Committee believes that the Bill would need “significant amendment should it progress through the parliamentary scrutiny process”; but, given that the issue is a matter of conscience, it has decided to make no recommendation as to its future progress.

Assisted dying in England and Wales

Following the judgment in R (Nicklinson) v Ministry of Justice [2014] UKSC 38, the DPP announced a small but significant clarification to the Crown Prosecution Service Policy on cases of encouraging or assisting suicide in relation to the meaning of those “acting in his or her capacity as a medical doctor, nurse, other healthcare professional, a professional carer [whether for payment or not], or as a person in authority, such as a prison officer, and the victim was in his or her care”, introduced following the comments by the Supreme Court.

This week, disability rights campaigners Nikki and Merv Kenward were granted the right to challenge these changes on the basis that, as a result, the prosecution of health professionals is less likely, thereby making assisted suicide policy in England and Wales too “liberal”: further information here and here. Mr and Mrs Kenward argued that the significance and legality of the clarifications should be properly assessed; but John McGuinness QC on behalf of the DPP stated that there was no legal basis for the challenge. However, Lord Justice Bean, sitting with Mr Justice Hickinbottom, said permission was justified by the “importance” of the subject.

Le Monde reports that Sarah, a 15-year-old Muslim schoolgirl at Léo Lagrange College in Charleville-Mezieres in the Ardennes, has twice been turned away from school on the grounds that the skirt she wore was … too long. The Principal of the college, Maryse Dubois, deemed that her skirt was an “ostentatious sign of religious affiliation” and, as such, forbidden by the loi no 2004-228 du 15 mars 2004 encadrant, en application du principe de laïcité, le port de signes ou de tenues manifestant une appartenance religieuse dans les écoles, collèges et lycées publics. Sarah, who removes her headscarf at the entrance to the college, had been “warned” that her outfit was a problem. Apparently she is not the only pupil to wear a long skirt in good weather: the rest of the time she wears trousers – and that, apparently, is not an issue.

BuzzFeed subsequently reported that Nicolas Cadene, Rapporteur Général of the Observatoire de la laïcité in the Prime Minister’s office, had said that wearing a black skirt to school did not breach the law:

“The Law of 2004 Act states that symbols and clothing that are worn to demonstrate a religious affiliation is prohibited. One obviously thinks of the veil, the kippah, a large cross, a Sikh turban or the dress of a Buddhist monk … A black skirt does not contravene the law a priori.”

But the point at issue seemed not to be the blackness of the skirt but its length. And we wonder how many Buddhist monks are pupils in French schools…

This week we learned that Lutfur Rahman had announced on his web site that he would be appealing the judgment made against him at the election court, Erlam & Ors v Rahman & Anor [2015] EWHC (QB). The scope for any appeal against the decision of an election court is limited, but we will include a consideration of the options within our promised review of “spiritual influence”, which will now be published early next week.

The churches and civil marriage

In our recent post The “Marriage Pledge” – Irish style, we reviewed developments in the United States on the “Marriage Pledge” and the position of the Roman Catholic Church in Ireland in relation to the forthcoming referendum on same-sex marriage. With regard to the former, First Things as now published “The Church and Civil Marriage” in which eight scholars and writers discuss whether religious institutions should “get out of the marriage business”. As in previous exchanges on the issue, canon lawyer Dr Ed Peters is one of the few invited writers that appreciate the realities of the situation, and suggests “because no other religious rite carries so many implications under civil law, it is not hard to see why some characterize religious weddings as essentially civil exercises performed with music and flowers.” However, he continues:

“ Setting aside Roman Catholic teaching that the bride and groom confer marriage on each other, canon law regards what clergy do in a wedding ceremony as fundamentally religious, not civil, in nature. Indeed, occasional queries from Catholic clergy about the possibility of officiating at a supposedly purely civil wedding are nearly always rejected by canonists.”

“If the day arrives when state power is turned against ministers who refuse to perform a “gay wedding,” one must refuse cooperation with such violations of natural law and religious liberty. But that day has not arrived, and there is no need to surrender pre-emptively the many societal goods (such as the convenience, and even meetness) that civil recognition of religious weddings accords.”

The churches and climate change

On 30 April, the Church Commissioners and The Church of England Pensions Board announced the £12million divestment from thermal coal and tar sands: neither body, nor the CBF Church of England funds will now make any direct investments in any company where more than 10% of its revenues are derived from the extraction of thermal coal or the production of oil from tar sands. The announcement coincides with the adoption of a new climate change policy recommended by the Church’s Ethical Investment Advisory Group (EIAG) that sets out how the three national investing bodies (NIBs) will support the transition to a low carbon economy.

Religion Clause reports that a “swingers sex club” in Nashville, Tennessee has apparently overcome a number of zoning hurdles that prevented its operation by turning itself into a church … the United Fellowship Centre. Local zoning laws had been amended to bar private clubs of any kind in the area where the building was located – between two churches and an upscale[1] Christian academy. The prohibition prevented private clubs at which people can  view or engage in sex from operating within 1,000 feet of a school.  The Washington Post pointed out:

“It goes without saying that religious values animate a good deal of the public discourse in Tennessee, where cities are not allowed to have laws protecting gay people from discrimination, and where lawmakers this year sought to make the Bible the state book. Religious institutions are so powerful and protected in America, reasoned the swingers’ lawyer, that if the club couldn’t beat them — well, perhaps it would join them. What is religion to you may not be to someone else; and what is religion to someone else may not be to you”.

[1] i.e. located at the upper end of a social or economic scale. 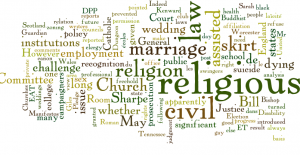 1 thought on “Religion and law round-up – 3rd May”