An astonishingly busy week, dominated by the continuing row over the refusal to screen the Lord’s Prayer advert. But there was other stuff as well…

Last week we mentioned what we thought was a potential major row over the refusal of leading cinemas to show a 60-second advertisement, based on The Lord’s Prayer, from December 18 as part of the ad reel before Star Wars: The Force Awakens. We were right; and the affair continues to rumble on. Our own view is that, whether or not the refusal to take the ad was a sensible decision (and it probably wasn’t), in strictly legal terms there’s probably no case to answer. But others think differently: see the comments to our post (and Twitter, passim).

Stop press: The Mail on Sunday reports that the Church of England has complained about the decision to the Equality and Human Rights Commission on grounds of discrimination. The report speculates that the EHRC could begin a test case under the Equality Act 2010. We’ll see.

In the debate following the Lords question on banning that advert the Parliamentary Under-Secretary of State, Department for Communities and Local Government, Baroness Williams of Trafford, (Con), said:

“My Lords, we have made clear our expectation that all schools should actively promote the fundamental British values of democracy, the rule of law, individual liberty and mutual respect and tolerance for those of different faiths and beliefs … These are the bedrock of British values and, without them, we cannot expect any young person to play a full part in civic society in this country.”

On the same day, the High Court handed down its judgment in R (Fox & Ors) v Secretary of State for Education [2015] EWHC 3404 (Admin), on which we hope to post a note later this week. Warby J ruled in favour of the three humanist parents and their children who challenged the Government’s relegation of non-religious worldviews in the latest subject content for GCSE Religious Studies. He stated that this conclusion can best be analysed on the basis of an error of law in the Secretary of State’s interpretation of the education statutes [76]. Hmm…

On Friday, Justice Lowell Goddard issued a statement announcing the start of her Inquiry’s investigative work. There are two categories of investigation. The first is institution specific and will include investigations of failings to protect children in the care or supervision of Lambeth Council, Nottingham and Nottinghamshire Councils and Rochdale Council; child sexual abuse in the Anglican and Roman Catholic Churches; the particular case of Medomsley Youth Detention Centre and the extent to which custodial institutions in general have failed to protect children from sexual abuse; and a wide-ranging investigation into sexual abuse in residential schools. The second will be a series of thematic investigations into broad areas of contemporary concern where multiple institutions may play a role in protecting children from abuse.

In February we posted on Ishaq v Canada (Citizenship and Immigration) 2015 FC 156 (CanLII), in which Ms Ishaq, a Pakistani national and devout Sunni Muslim, wanted to wear her niqab at the ceremony at which she was to become a Canadian citizen. She argued that the requirement to unveil during the proceedings was contrary to paragraph 2(a) (freedom of conscience and religion) and section 15(1) (equality before and under law and equal protection and benefit of law) of the Charter of Rights and Freedoms – and the Federal Court agreed with her.

The then Prime Minister, Stephen Harper, said his Government would appeal the decision and described the wish to take the citizenship oath while veiled as “offensive”. But the Conservatives lost the election; and The Star reports that the new Liberal Government has formally dropped the appeal to the Supreme Court of Canada – and the new Attorney General, Jody Wilson-Raybould, rang Ms Ishaq in person to tell her the news. [Thanks to ICLRS.]

… but not in France

Probably to no-one’s surprise, the ECtHR duly found in favour of the French Government in Ebrahimian v France [2015] ECHR 1041, a case involving a psychiatric social worker on a fixed-term contract who was told in 2000 that, following complaints from patients, her contract would not be renewed because she refused to remove her headgear (whether a hijab or a niqab is not entirely clear from the text). The Court was prepared to grant a very wide margin of appreciation: too wide, in the opinion of De Gaetano J, the Maltese judge. The judgment is available only in French: we posted a summary here.

In De Lange v Presiding Bishop of the Methodist Church of Southern Africa and Anor (CCT223/14) [2015] ZACC 35 the Constitutional Court refused, unanimously, to set aside an arbitration agreement in the wake of the suspension and discontinuation of Ms De Lange as an active Methodist minister following her announcement of her intended marriage to her same-sex partner. We hope to post a full note on the case in due course.

According to the Court’s press summary, the Court found, first, that Ms De Lange had not shown good cause to set aside the arbitration agreement: further, because the issue related to interpretation of religious doctrine, arbitration would be the appropriate forum in which to examine the Church’s application of its rule against same-sex marriages for ministers. Secondly, Ms De Lange had unequivocally disavowed her unfair discrimination claim before the High Court and was not free to raise the claim for the first time on appeal. Thirdly, the principle of constitutional subsidiarity applied and meant that Ms De Lange should have first brought her unfair discrimination claim to the Equality Court. Finally, she had failed to file a notice in terms of the Uniform Rules of the High Court, an omission which deprived other interested parties, including religious communities, of the opportunity to intervene as parties to the dispute or to seek admission as amici curiae in the High Court. It accordingly dismissed the appeal. [Thanks to David Scrooby.]

Later this week, the ECtHR will be handing down judgment in Károly Nagy v Hungary, in which a minister of the Hungarian Reformed Church is contesting his dismissal by a church court after he had been reported in a local newspaper as claiming that state subsidies to a Calvinist boarding school had been paid unlawfully. The Supreme Court concluded that there was no contractual relationship between Mr Nagy and the Church and, therefore, that his claim had no basis in civil law. It will be an interesting judgment, not least because of the obvious parallels with President of the Methodist Conference v Preston [2013] UKSC 29.

An end to banns?

We posted on Stephen Trott’s private Member’s motion (PMM) at Synod calling for the replacement of banns of marriage with universal civil preliminaries, probably on the Scottish model. The subject has generated quite a lot of comment but it is uncertain as to if or when it will be debated by General Synod; the November 2015 session is the earliest opportunity but generally there is only space for one or two PMMs to be debated in each group of sessions. The C of E advice on PMMs notes:

“[w]hen putting together the agenda for the next meeting of the Synod, the Business Committee has regard to the number of signatures each motion has received in deciding which should be debated … While the motion with the most signatures is often the one selected there can be reasons for selecting another that has also attracted considerable support (it might, for example, be more time-critical). Once a motion has been open for signature for three groups of session, it is removed from the Agenda if it has not attracted 100 signatures.”

We hope that readers will forgive us a modest degree of self-advertisement; but we were 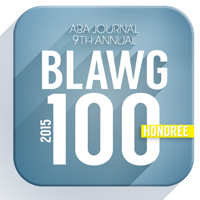 totally astonished to receive an e-mail on Monday telling us that we had been included in the 9th Annual Blawg 100 of the ABA Journal. Law and religion is still very much a niche market and we wouldn’t have thought that very many US lawyers would be especially interested in it – still less that they might be curious about what goes on over here, given the endless stream of First Amendment cases in their own jurisdictions. Even so, we’re deeply flattered.

(We were also relieved to note that the reason why Religion Clause was not in the list is because it has been elevated to the ABA Journal Hall of Fame, which means it’s now hors concours: just as well, because Howard Friedman’s is the standard to which we aspire.)