The Prime Minister and the EU

On Friday the Prime Minister announced that he had concluded an agreement with the other EU Heads of Government that he could recommend in the forthcoming referendum campaign, which is to be held on 23 June (when around 135,000 people will be at the second day of Glastonbury 2016). EU membership (or, indeed, non-membership) is incredibly important: however, there are lot of other places such as Reimagining Europe in which to discuss it – and we don’t propose to do so.

However, we will be keeping track on “Euro myths and legends” as far as they impact on “law and religion”; in view of the PM’s announcement, an increase in the misinformation regarding the European Union from the “red tops” and other is to be expected, for which the blog on the European Commission’s UK website and Full Fact [“We’ll supply the facts, you supply the opinion”] are essential reading. As a rule of thumb one should query any media headlines that INSIST on capitalization of headlines concerning the EU, or include the words “Brussels”, “barmy”, or “bananas”.

It is still close enough to Candlemas to note the (pre-Christmas) headlines in the Daily Express After meddling with our vacuums and TVs… now EU officials want control of your CANDLES. The riposte from the European Commission pointed out that there is no final decision yet on any stronger rules, and concludes:

“parts of the media have expressed outrage that ‘Brussels’ – which in fact means EU governments and directly-elected MEPs as well as the European Commission – should, as the Daily Express put it, be even considering a ‘barmy scheme’ to regulate candles. There is little doubt that the same newspapers would be the first to complain if dangerous candles were being imported or if safety standards were found otherwise wanting.

Finally, on its website the Express linked again to its web page from earlier this year containing a series of untrue and/or misleading stories about alleged ‘crazy EU rules’. Our response to that is here. Snuffing out dangerous candles is common sense, not ‘barmy’ Brussels bureaucracy”.

Much the biggest legal news of the week had nothing whatsoever to do with “law & religion” – though quite a lot to do with law and morality. In one of its most important judgments since its inception, the Supreme Court concluded in the conjoined cases of R v Jogee and Ruddock v The Queen [2016] UKSC 8: [2016] UKPC 7 that in the 1980s the criminal courts had taken a “wrong turn” in the application of the law on joint enterprise in cases of murder and that it was obliged to correct the mistake: “to bring the mental element required of a secondary party back into line with that which is required of the principal”. Further comment is well beyond our technical competence: Diarmaid Laffan, who acted for Ameen Jogee, blogs about the case here. (The ruling applies only to England and Wales and Northern Ireland: the doctrine of “art and part” in Scots criminal law is rather different.)

The majority of early press comment was (predictably) wildly inaccurate: in what was possibly the quote of the week, David Allen Green tweeted: “The nearer the front page a legal story, the more likely it will be false and misleading”. Writing in The Guardian, Joshua Rozenberg nails it as usual.

Living Out is an Evangelically-oriented organisation that describes itself as “a group of Christians who experience same-sex attraction bringing out into the open the questions and dilemmas that gay Christians can often face”. Its application to be registered as a charity was initially rejected by the Charity Commission; however, after reviewing its previous decision the Commission has now decided that Living Out should be entered on the register:

“On the basis of further evidence, submissions, and revised objects adopted by Living Out, the Commission was satisfied that the purpose of Living Out was for the public benefit. The Commission concluded that Living Out is concerned with promoting the wider Christian principles of unconditional love, compassion, acceptance and understanding, and a welcoming place in the Christian Church for same-sex attracted individuals who wish to stay true to their Christian faith.”

The Columba Declaration and its aftermath

To no-one’s surprise, the Church of England’s General Synod duly voted in support of the Columba Declaration: it would have been headline news had it not. And the Scottish Episcopal Church feels – understandably – rather hurt by the development. Writing in his blog, Thinking Aloud, the Primus, the Most Revd David Chillingworth, commented on the Columba Declaration like this:

It has also been suggested in some quarters that the Church of Scotland would have no objection to bishops; however, we’re afraid that the issue is much more complicated than a simple matter of ecclesiological taste because it engages statute law. Article II of the Articles Declaratory in the Schedule to the Church of Scotland Act 1921 states that the Kirk’s

“government is Presbyterian, and is exercised through Kirk-sessions, Presbyteries, Provincial Synods, and General Assemblies.”

Unless bishops were merely to be regarded simply as presbyters in funny hats, without any special powers or responsibilities of office, it’s extremely difficult to see how their presence in the Kirk could be in conformity with the terms of Article II. And if they were so regarded, in what sense would they still be “bishops” in the terms in which the historic episcopal Churches understand the office? For our part, we can’t see it happening: or, at any rate, not in our lifetimes.

On Sunday we posted The Church of England and “Festival Churches” in which Trevor Cooper, Chairman of the Council of The Ecclesiological Society, explored the concept of designating some of the CofE’s church buildings as “Festival Churches”; such buildings have “some potential to help avert a sharp upturn” in the number of churches closing every year and the aim of Festival Churches is attempting to ensure that churches remain open. This was quickly followed by an update from Trevor and a post by Stuart Jones, of Birketts LLP and Registrar of the Diocese of Norwich, who explained the approach being adopted in the Diocese.

Although not designated as such, a very early example was the Grade I church of St Enodoc, Trebetherick, currently a chapel of ease in the parish of St Minver, Cornwall. 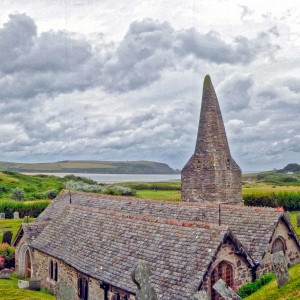 The Wikipedia entry states that from the 16th century to the middle of the 19th century, the church was virtually buried by sand from the dunes in Daymer Bay and was known locally as “Sinking Neddy” or “Sinkininny Church”. To maintain the tithes due to the church, it had to host services at least once a year, so the vicar and parishioners descended into the sanctuary through a hole in the roof. By 1864 it was unearthed and the dunes were stabilized, but is nonetheless hidden as Betjeman observes in Sunday Afternoon Service in St Enodoc Church, Cornwall: “Come on, come on! This hillock hides the spire … “ Sir John and other members of his family are buried in there.

Strasbourg Observers has announced the results of its annual poll for the best and worst ECtHR judgment of 2015. There were two “law & religion” judgments in the running, one in each category: Oliari & Ors v Italy [2015] ECHR 716 (about non-recognition of same-sex couples) came out second best, while Ebrahimian v France [2015] ECHR 1041 (about veiling by a Muslim hospital worker) was deservedly voted the worst.

The Charity Commission published a brief monitoring report on the activities of the Preston Down Trust.

Anglican News Service reported Safety fears force Easter Sunday closure of Dublin churches: the Garda Síochána has ordered one of two Anglican Cathedrals and six city-centre churches to close on Easter Sunday as a result of a safety cordon being put in place by security officials because of events being held to mark the centenary of the Easter Rising. The ban was imposed without prior discussion with the Churches. However, a subsequent report stated quoted a spokesman for the Taoiseach saying:

“The Government hopes that further consultations can take place that will provide reassurance to the Church of Ireland that it will be possible to facilitate access by parishioners to its Easter services” .

Since today is only the second Sunday in Lent, there are a few weeks for these arrangements to be agreed. Watch this space.

As Frank was walking back from a meeting in Lincoln’s Inn Fields the other day, past the Faraday building on the north side of Queen Victoria Street, he noticed this… 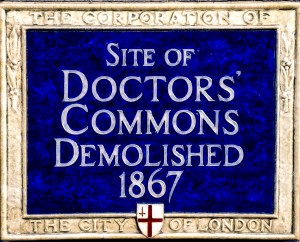 May they rest in peace...

… and rise in glory? – the suggestion of by Paul Barber in his article “The Fall and Rise of Doctors’ Commons?” to mark the “historic new LLM degree in Canon Law from the University of Wales College of Cardiff” established 25 years ago.