A relatively quiet week with Parliament in recess, the courts not sitting, and choristers recovering from Easter

‘Your Death, Your Choice’, a campaign to change the law on assisted dying throughout the UK, is seeking £50,000 in crowdfunded donations to instruct Bindmans LLP begin a fresh case seeking the right to die for those suffering from terminal or incurable conditions who have made a rational and committed decision to end their lives. The campaign is supported by the British Humanist Association.

In Nicklinson & Lamb v United Kingdom [2015] ECHR 709 the Fourth Section held inadmissible the complaints of Jane Nicklinson and Paul Lamb about the incompatibility of the domestic law on assisted suicide with the right to respect for private and family life under Article 8 ECHR. Earlier, however, in R (Nicklinson & Anor) v Ministry of Justice [2014] UKSC 38 a nine-judge panel of the Supreme Court had sent out rather mixed messages as to whether or not the courts might intervene should Parliament fail to legislate decisively on the issue. We shall see what, if anything, transpires.

In a piece in the Telegraph, David Cameron’s shallow, clichéd Easter message shows why politicians really shouldn’t do God, Tom Harris rubbishes the PM’s Easter message as either brave or reckless. The tone can be deduced from the title; and Harris suggests that

“… all those qualities which Cameron claims describe Christian Britain – responsibility, hard work and compassion – can be just as easily applied to the followers of almost any religion (or, indeed, of none). So labelling us as ‘Christian’ is meaningless. We are certainly a Christian country if by that term you mean a country whose culture and heritage are based on a centuries-long tradition of Western, state-approved Christianity. But I’m not convinced that’s what Cameron meant.”

He contrasts – favourably – the British tradition of treating religion as an essentially private matter with the American habit, particularly around election time, of dragging God into every political rally almost as a matter of course.

So far, so predictable: what is less so, however, is that, as of last Monday, in an accompanying on-line poll a surprisingly high 40% had voted “Yes” to the question, “Should Britain stop acting as if it is a Christian country?” in a total vote of some 83,000. And remember: most of them were probably Torygraph readers rather than neo-Trots.

Bereavement allowance and unmarried partners: one we missed

In McLaughlin’s Application [2016] NIQB 11 Ms Siobhan McLaughlin challenged decisions of the Department for Social Development (“DSD”) refusing her benefits, in accordance with  ss 36 and 39A of the Social Security Contributions and Benefits (NI) Act 1992, after the death of her partner. They had lived together as man and wife for 23 years and had four children, the eldest of whom was now 19. DSD refused to pay her Bereavement Benefit and Widowed Parent’s Allowance on the sole ground that she was neither married nor a civil partner (which, of course, she could not be in any event) at the date of her partner’s death.

In February, Treacy J held that excluding Ms McLaughlin, on grounds of marital status, from a benefit whose purpose was to alleviate families’ financial burdens on the death of a parent could not be justified and violated Article 8 ECHR (private and family life):

“The rationale for the benefit applied equally to persons in the applicant’s position as it does to married widows with children.  The purpose of the benefit was to diminish the financial hardship on families consequent upon the death of one of the parents.

Even allowing for the State’s margin of appreciation I do not consider that the exclusion of the applicant from Widowed Parent’s Allowance on the grounds of her marital status can be justified.  Indeed, it may seem somewhat strange to rely, as a justification for the restriction, on the contention that it promotes the institution of marriage and civil partnership when parents, whatever the status of the relationship, owe the same or similar financial or legal duties towards their children.  The restriction appears to be inimical to the interests of children” [71 & 72].

It is thought that the decision will be appealed, not least because, if the ruling stands, there will be similar challenges in the rest of the UK at a potential estimated cost to the Department for Work and Pensions of some £300M.

On 31 March, the Vatican announced that Pope Francis’s highly-anticipated post-synodal Apostolic Exhortation, “Amoris Laetitia” (The Joy of Love) on love in the family will be released on Friday 8 April. The Exhortation will be presented to journalists at the Holy See’s Press Office with a panel of speakers comprising: Cardinal Lorenzo Baldisseri, general secretary of the Synod of Bishops; Cardinal Christoph Schönborn OP, Archbishop of Vienna, and an Italian married couple: Professor Francesco Miano, lecturer in moral philosophy at Rome’s University of Tor Vergata, and his wife, Professor Giuseppina De Simone in Miano, lecturer in philosophy at the Theological Faculty of Southern Italy in Naples.

The Apostolic Exhortation “is the conclusion of a two-year synod process discussing both the beauty and challenges of family life today”. In 2014, the Vatican hosted an Extraordinary Synod which was in preparation for the October 2015 Ordinary Synod. An estimated 190 bishops from around the world participated in each gathering. The 2015 Synod’s theme was “the vocation and mission of the family in the Church and the modern world.”

On Friday 1 April 2016, Sir Philip Mawer, the Independent Reviewer, published his first Annual Report to the Archbishops of Canterbury and York on the Declaration on the Ministry of Bishops and Priests (Resolution of Disputes Procedure) Regulations 2014. With regard to the legal issues raised, yesterday we posted on the clarification of the Legal & Canonical Status of Provincial Episcopal Visitors in Appendix III of the Report, and next week we will look at matters concerning licensed clergy in relation to the House of Bishops Declaration.

“Blessed Cecilia, appear in visions,
To all musicians, appear and inspire:
Translated Daughter, come down and startle,
Composing mortals with immortal fire.” 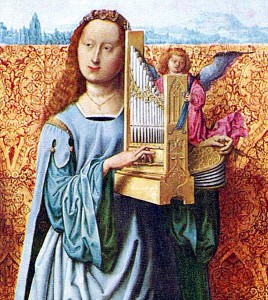 We venture to assume that St Cecilia’s organ did not suffer the same fate as the 100-year-old instrument at St John the Baptist, Peterborough, which went up in smoke when the blower pump overheated: the Palm Sunday congregation had to be evacuated and repairs could cost up to £80,000. Those who subscribe to Oscar Wilde’s observation that “Life imitates Art far more than Art imitates Life” should perhaps start worrying about Britten’s cantata St Nicholas and the three pickled boys.