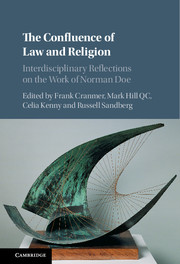 and teaching of ecclesiastical law and the constitutional position of church and state. The extent and breadth of his published work is well known to scholars in both these fields and, as founder and director of the Centre for Law and Religion at its School of Law and Politics, he has put Cardiff on the map as a leading research centre as well as teaching pioneering courses on law and religion. He has revived the teaching of canon law in England and Wales, which had been dormant since its prohibition at the time of the Reformation.

This week sees Norman’s accomplishments recognised in the publication by Cambridge University Press of a collection of essays: The Confluence of Law and Religion: Interdisciplinary Reflections on the Work of Norman Doe, edited by Mark Hill, Celia Kenny, Russell Sandberg – and me. Its publication also marks the twenty-fifth anniversary of the Cardiff LLM in Canon Law.

As well as the four editors, contributors include David J Seipp, Timnah Rachel Baker, Paul Colton, Carolyn Evans, Silvio Ferrari, Baroness Hale of Richmond, Richard H Helmholz, Linda Hogan, Anthony Jeremy, Alison Mawhinney, Edward Morgan, Robert Ombres OP and Norman Solomon, with a foreword by Archbishop Rowan Williams. The chapters range across the early influences of canon law on English common law, the development of ecclesiastical law itself and the relationship between canon law and doctrine, to sociological theory in relation to law and religion, human rights and freedom of religion and conscience, ending with a look at the possible future of law and religion as a political force and as a growth area for interdisciplinary studies.

As its title suggests, the contributors engage in a dialogue with the distinguished body of work produced over the years by Professor Doe, who has been, and remains, a formative influence and a mentor to all four editors. However, we hope that it may do more than that, providing our readers with at least a sketch-map of where UK research into law and religion stands in 2016 and where it is likely to go in the next few years. 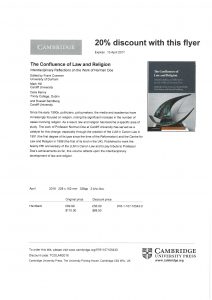