… which, you might think, is an unlikely subject to be festive about. But the purpose of 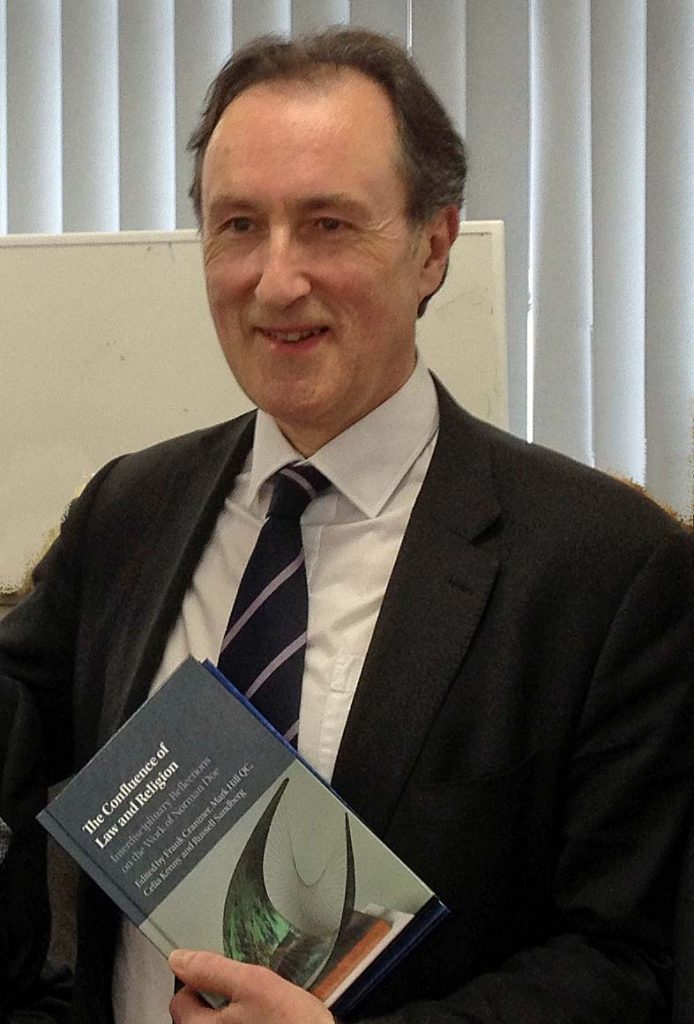 the Festival was to mark the 25th anniversary of the University of Wales/Cardiff University LLM in Canon Law and to launch The Confluence of Law and Religion (which we have noted previously). If nothing else, the conference showed just how much the field has grown in the last twenty-five years: there was a very big attendance, with scholars coming from as far afield as Australia, Canada and the US, and between them they read about fifty papers. We frequently found ourselves having to choose between two sessions taking place simultaneously, both of which we wanted to attend.

We contributed to the “Meet the Editors and Bloggers” session and we have posted the background paper to our contribution here, while Frank read a paper on the rather murky subject of employment law and the clergy, which we intend to post tomorrow.

Otherwise, it has been a fairly quiet week, except at the ballot-box…

Thursday saw a raft of elections: for the Scottish Parliament, the Northern Ireland Assembly and the National Assembly of Wales, for the Mayor of London and for various local councils and Police & Crime Commissioners. Results were, to put it mildly, variable: Sadiq Khan, the Labour candidate, was elected Mayor of London in a campaign marred by accusations of antisemitism and Islamophobia, while in Scotland the SNP increased its strength but did not quite manage to convert its opinion poll lead into an overall majority and in Wales Labour is again the largest party but is now two short of an overall majority.

Perhaps the Scottish result was the most interesting one: the Labour Party came third behind the Conservatives. In the General Election of 1955, the Conservatives won 36 of the 72 Scottish seats with 50.1 per cent of the vote: since then, their fortunes have been in steady decline. Whether the latest result represents the beginnings of a realignment, with a left-of-centre SNP facing a right-of-centre Conservative & Unionist Party and the Labour Party sidelined, or whether it is just a random blip, remains to be seen. But we suspect that the result has little, if anything, to do with the change of leadership of the Labour Party in London. Scotland is now “another country”: and we wonder if many Scots take very much notice any longer of what is happening in London politics.

As for what this has to do with the subject of this blog, the rather tortuous answer is this.

As to Northern Ireland, it looks very much like more of the same: the Democratic Unionist Party and Sinn Féin are still the two largest parties in the Assembly. However, there is at least a possibility that, instead of going into a power-sharing Executive,the Ulster Unionist Party and the SDLP will decide to constitute themselves as a formal Opposition. But however things shake down, it looks highly unlikely that the new Assembly will be any more ready than its predecessor to do anything about legalising abortion, even in the case of fatal foetal abnormality or where the pregnancy is a result of incest or rape – let alone to legislate for same-sex marriage.

As to Scotland, as the EU Referendum looms it is pretty clear that there is going to be a Scottish majority for staying in, whatever happens in the rest of the UK. So if the UK, as a whole, votes ‘Out’ and Scotland votes ‘In’, the argument will then shift towards the overall constitutional settlement all over again and, we would guess, the issue of adherence to the ECHR will come up as well. This has already been the subject of correspondence in the Northern Ireland context between the Minister for Justice and Equality, Frances Fitzgerald (who is also the new Tánaiste), and Justice Secretary Michael Gove. So, as Will Adam recently tweeted, maybe not so much ‘In’ or ‘Out’ as ‘Shake It All About’.

On 4 May the BBC reported  “Embryo study shows ‘life’s first steps’” as for the first time, embryos have been grown past the point they would normally implant in the womb. The research, in the UK and US, was halted just before the embryos reached the legal limit of 14-days old. Whilst the breakthrough in growing embryos has the potential improve fertility treatments and revolutionise knowledge of the earliest steps to human life, some scientists have suggested that the 14-day limit should be reconsidered.

These developments are not unexpected and at its ‘Forward Look’ planning meeting in February, the Nuffield Council on Bioethics learned of potentially important scientific research that could be achieved by maintaining embryos in the laboratory for longer than 14 days. This week it issued a Press Release stating

“As a result of that discussion the Council agreed to explore whether arguments for reviewing the 14-day limit are gaining force, in the expectation that any move to review this limit will be likely to generate significant moral controversy and would require careful analysis.

Later this year, the Council intends to bring together invited participants with a range of perspectives on embryo research in order to evaluate whether, after 25 years, there may be persuasive reasons to review this legal limit, or whether the reasons for its introduction remain sound. It will publish a note of that meeting and then consider whether to undertake further work.”

Responding to the news, the director of the Anscombe Bioethics Centre, Professor David Albert Jones, warned “[o]n a technical level this experiment represents a breakthrough but it is also a further step away from ethical science and a further step towards an increasingly inhuman future”.

The Church Commissioners and climate change

On 1 May, the Asset Owners Disclosure Project (AODP) issued its 2016 Report on the world top 500 investors and how they were reacting to climate change. The Church Commissioners went straight to the top, coming joint 10th with Etablissement de retraite additionnelle de la Fonction Publique and being given an AAA rating for their awareness and action on climate risk. The Commissioners then won two prizes at this year’s Portfolio Institutional Awards: the Best Charity/Fund/Trust Award for the first time since 2013 and the Best Implementation of Responsible Investment Award for the second year running.

Tomorrow sees the start of the Court of Appeal hearing in the Ashers Baking case, in which the appellants are seeking to overturn the decision of Belfast County Court that they had discriminated against Gareth Lee on the grounds of sexual orientation and political beliefs when they refused an order placed at their Belfast city centre shop in May 2014 for a cake depicting Sesame Street characters Bert and Ernie. along with the motto ‘Support Gay Marriage’. Rather than bake the cake, the appellants refunded his money on the grounds that the message went against their Christian beliefs.

A previous appeal hearing scheduled for February was delayed, following a late intervention by the Attorney, John Larkin QC. An interim hearing decided that the Attorney had raised an arguable case that the Equality Act (Sexual Orientation) Regulations (Northern Ireland) 2006 discriminate directly against those who hold religious beliefs or political opinions; and he has been given leave to make representations at the full hearing.

At the Cardiff conference, Professor Gwyneth Pitt, of Kingston Law School, gave a very good paper on the Ashers case entitled ‘The Great Irish Bake-Off’. Wish we’d thought of that one ourselves.

“Following the allegation against Bell, who was married but had no descendants, the Church asked potential victims to contact the NSPCC. No-one has yet done so. But John Cameron, the NSPCC’s head of helplines, says it’s important that organisations show complainants are ‘being listened to’ and that allegations are taken seriously. If George Bell’s supporters win their battle, it’s likely to have a wider impact on the controversies of investigating historical abuse.”

David TC Davies (Con, Monmouth) distinguished himself during questions to the Second Church Estates Commissioner on Thursday when, in relation to the Commissioners’ policy on climate change and investment policy (see above), he suggested that

“Before they are too critical of the oil companies … the Church Commissioners read the Bible—Matthew 25, the parable of the oil lamps and the ten virgins—and remember that it was the five virgins who lived happily ever after and who had a cheap and ready supply of this much-maligned fossil fuel.”

Oh, very droll: except, dummy, the virgins – wise or foolish – would be using vegetable oil, not Castrol GTX. The Second Church Estates Commissioner responded with admirable restraint: how different from us.