A week dominated by Brexit (and just how often will we read that?) – but there was a mixed bag of other news as well…

In the courts this week

The big news in England & Wales has been the hearings in R (Santos and M) v Secretary of State for Exiting the European Union, which began on 13 October before the Lord Chief Justice, the Master of the Rolls and Lord Justice Sales. There is an uncorrected transcript of the proceedings here and a summary by Robert Craig, of the LSE, here. The speculation is that if and when the judgment – whichever way it goes – is appealed, it will go straight to the Supreme Court. (Yesterday, we published the latest instalment in our Brexit Basics coverage.)

In Strasbourg, the Grand Chamber heard argument in Károly Nagy v Hungary (application no. 56665/09).The case concerns a pastor’s compensation claim against the Hungarian Calvinist Church following his dismissal and his contention that the refusal of the domestic courts to adjudicate his claim violated his rights under Article 6 ECHR. We noted the chamber judgment here: Clergy discipline and employment rights: Károly Nagy v Hungary. Expect a judgment sometime in 2017.

The CJEU handed down an Opinion on the issue (unlikely to a Brit) of whether or not a third party can seek to annul a marriage when one of the parties to the impugned marriage is dead: Edyta Mikołajczyk v Marie Louise Czarnecka and Stefan Czarnecki [2016] CJEU ECLI:EU:C:2016:772. We noted it here.

The BBC, the Bishop of Norwich and religious (il)literacy

In a speech in the House of Lords last week, the Bishop of Norwich, the Rt Revd Graham James, made some telling points on religious illiteracy and the need for better education in matter of religion:

“The BBC’s first public purpose is to provide impartial news and information to help the people of this country understand and engage with the world around them. I believe we are generally extremely well served, although I have always believed there is one area where the BBC is insufficiently distinctive … It is in relation to religion. Less effort is put into interpreting a religious world than a political one, even though the world population is much more religious than it is political. Sport has a galaxy of professional pundits and commentators; religious affairs has one correspondent and not even a religion editor—partly, I suspect, because it is assumed that news and current affairs more generally can deal with religion as a minority genre. Or, perhaps, it is just too difficult to interpret an intensely religious world to what is assumed to be a secular Britain.

While there is a need for a distinctive service, the BBC has not invested sufficient resources, not least in its own religion and ethics department. I do not believe the BBC has any sort of evangelistic task, but it has an educational one, and our increasing religious illiteracy as a nation does us no favours in our understanding of and relationships with the wider world, especially the world beyond Europe.

Distortions of religious beliefs and sacred texts are becoming more common in our world and are being used as political weapons. But if we are unfamiliar with the tenets and beliefs of the world faiths, we will not be able to interpret or assess them, or sort out good religion from bad.

A commitment to religious literacy among its journalists and the promotion of a more religiously literate nation would be a major and distinctive public service that the BBC could offer our country. There is a huge amount of resource around on religious literacy itself. In an age when so much of our public and political discourse is bedevilled by a rejection of complexity, this is an area where the recognition of complexity is very badly needed.”

He’s not wrong about that. His other criticism, however, seemed rather wider of the mark: “the scant reference in the BBC to … the Archbishop of Canterbury’s visit to Rome.” It could just be that few outside the Church of England and the Church of Rome believe that it means very much, given the major ecclesiological differences between the two Churches – or, more likely, that the general public isn’t remotely interested in ecumenism. Incidentally, Terry Eagleton observed in his Theos Annual Lecture that

“Today, the most successful substitute for religion is sport. It is sport which is the opium of the people, which lays on the weekly liturgies, supplies the canon of legendary heroes and provides the sense of solidarity which one might previously have found in a chapel or cathedral.”

He even may be right, if by “sport” he means the association football industry…

The Motherwell Times reports that a group of non-Roman Catholic students at Taylor High School in New Stevenston has been punished with a week’s worth of lunchtime detentions after they refused to attend the school’s Patron Day Mass, at which the principal celebrant was Bishop Joseph Toal and which was also to serve as a memorial service for former members of staff who had died. Acting head teacher Nicola Daley was reported as saying:

“Regrettably, a small number of pupils, who had attended school in the morning, opted to truant in the afternoon and miss the service. The pupils have been subject to school discipline as a consequence of their actions.”

As we have noted previously, children in Scotland and in Northern Ireland do not have right to withdraw from collective worship without parental permission even if they are aged sixteen or over – at which age, it should be remembered, they may marry in Scotland without their parents’ permission. The present position was recently criticised by the UN Committee on the Rights of the Child; and Humanist Society Scotland recently launched a judicial review against the Scottish Government over its refusal to allow sixth-form students to opt out of religious observance. We await the proceedings with interest.

Also last week, Foyle MLA Eamonn McCann (People Before Profit) endorsed on behalf of his party the Campaign to End Compulsory Religious Worship in Northern Ireland’s Schools. He said that

Further, as a socialist he believed in equality, including equality of religious views:

“Too many people are unaware of the practice of compulsory collective worship in our schools, how schools have no choice in holding worship, and how pupils – even over 16s – have no right to withdraw without parental permission. Over-16s and post-GCSE students must be freed from attending religious services against their will.”

Hijabs in court in Quebec: an inconclusive result

A Quebec Superior Court justice has strongly criticised a lower court judge’s insistence that a Montreal woman, Rania El-Alloul, remove her hijab in order to have her case heard in court, though, evidently, there was nothing he could do about it.

In February 2015, Éliana Marengo J, of the Court of Quebec, refused to hear Ms El-Alloul solely because she insisted on wearing a hijab in court: she ruled that Ms El-Alloul was not suitably attired as required by Article 13 of the Rules of the Court of Quebec. In El-Alloul c. Québec (Procureure générale) 2016 QCCS 4821 (CanLII), Ms El-Alloul sought declarations that her right to freedom of religion under Article 2(a) of the Canadian Charter of Rights and Article 3 of the Quebec Charter was breached by the decision of Marengo J and that she had the right under the Canadian Charter and the Quebec Charter to be heard in the Court of Quebec wearing her hijab or her other religious dress.

Décarie JCS held that the position adopted by Marengo J, that the courtroom was a secular space in which the religious convictions of a person had no right to be cited, was not the law of Canada: McLachlin CJ had previously rejected that approach in the Supreme Court in R v NS 2012 CSC 72 (CanLII). He ruled, however, that, though he had great sympathy for Ms El-Alloul and greatly regretted the way she had been treated, it was not a matter that could be settled by a judicial declaration. [Le Tribunal éprouve beaucoup de sympathie à son égard et déplore grandement, encore une fois, la façon dont elle a été traitée. Cependant, il ne s’agit pas là d’une incertitude ou d’une controverse qui pourrait être réglée par une déclaration judiciaire.]

He added that the conclusion reached by the Court “with reluctance” [à contrecœur] would have been entirely different had the dispute before the Court of Quebec still been pending and if Ms El-Alloul had sought judicial review of Marengo J’s ruling. But that was not the situation in the present case and, in the circumstances, he had no alternative but to reject the application.

And finally I … Donald Tusk on Brexit

“That was pure illusion, that one can have the EU cake and eat it too. To all who believe in it, I propose a simple experiment. Buy a cake, eat it, and see if it is still there on the plate … There will be no cakes on the table, for anyone. There will be only salt and vinegar.”

Congrats to Ms May. She’s made me proud to be an old Polish immigrant Jew. Perhaps she has thoughts on logos I might wear to denote that. 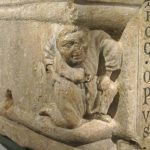 This week, David was at the “home” of canon law in Bologna, although his “law and religion” interests were limited to visiting “the oldest university in Western Europe”, and noting the visible police presence in the S Petronio Basilica on account of the understandably controversial fresco by Giovanni da Modena.

Meanwhile, in the UK, Antonio Carluccio (correctly) claimed that the domestic version of “spaghetti Bolognese” was nothing like the traditional dish, an assertion which David and Gerry were happy to verify. And many thanks to Frank for holding the fort on L&RUK.