The recent statement by the Dean and Chapter of York concerning the Minster’s volunteer bell ringers was apparently triggered by concerns relating primarily to safeguarding, health and safety, and other issues. The circumstances in York are a matter for local resolution, and no further comment is necessary. 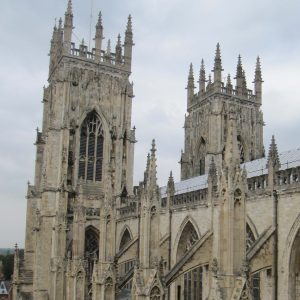 However, this has highlighted the necessity for PCCs and cathedral authorities to ensure that adequate measures are in place for the activities of volunteers for any place of worship, regardless of its size or perceived importance. Volunteers are used for a wide range of activities, some of which are described on the York Minster web pages. This post is not intended to provide guidance on the specialist area of bellringing, which is outwith our own expertise, but draws upon this as an example of the issues to be addressed in the organization of volunteer groups.

The Church of England website is an important resource for general information on safeguarding and includes a section on Frequently Asked Questions in relation to Disclosure and Barring Service (DBS) eligibility and related matters (2017). In addition, the Central Council of Church Bell Ringers has drawn up specific guidance, General statement on Safeguarding Children in Towers (December 2015); this was developed in collaboration with the Church of England, National Safeguarding Team. The Central Council guidance states:

“Tower Captains, their Deputy / Assistant and bell ringing teachers/trainers must be safely recruited in line with their responsibilities to teach or train children and/or manage those that teach or train children in accordance with the Church of England Safer Recruitment Practice Guidance [Published: July 2016, Review Date: May 2017]. It is the responsibility of the Tower Captains and the local PCC to ensure that this happens. In addition, the Tower Captain and Deputy / assistant /bell ringing teachers/ trainers must undertake Diocesan safeguarding training, in line with Diocesan expectations, which must be refreshed every three years”.

The CofE Safer Recruitment Guidance applies to “all roles in the Church of England, senior clergy, as well as parish priests, and all those in other paid and voluntary roles” and “[u]nder S5 Safeguarding and Clergy Discipline Measure 2016, all clergy authorised to officiate, churchwardens, licensed readers, lay workers and parochial church councils must pay ‘due regard’ to the Guidance. A failure to do so may result in disciplinary proceedings where appropriate”, i.e. a relevant person cannot disregard the Guidance and must follow it unless there are cogent reasons for not so doing. However, only a number of activities are described; the Central Council Guidance identifies bellringing activities for which DBS checks are required, the person undertaking the checks, and the supervision of the particular activity.

With regard to the practicalities, teaching bellringing necessarily involves physical proximity; The Guardian quotes an unnamed vicar who has had to deal with safeguarding issues within his bellringing team: “[t]he learner is encompassed physically while learning to pull the ropes. Navigating the accepted limits and boundaries of physical contact can be difficult” [but see Comments, below]. 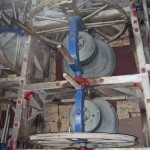 of the ringers”. Ecclesiastical Insurance has issued Conditions of use applying to change–ringing of bells, and in addition to its statement on safeguarding Children in Towers, above, (and a December 2018 update), the CCCBR Tower Stewardship Committee has issued a number of related Guidance Notes [Insurance; Tower Management; Tower Safety and Risk Assessment; Church Law; Fire Assessment and Protection; and Noise, the Law, and the Environmental Health Officer]. Advice on tower safety stresses the importance of undertaking a risk assessment; the Work at Height Regulations 2005; and includes general principles for health and safety in the bell tower. A more detailed consideration of risk assessment was drawn up by a former Wantage Ringing Master and is now incorporated in advice published by the Oxford Diocesan Guild of Church Bell Ringers.

The Dave Walker cartoon Chain of Command expresses the perception that in churches (and presumably Cathedrals), some volunteer groups such as bell ringers are what has been described as “one of the unaccountable breeds that include organists, choirs, vergers and flower arrangers”. In the case of churches and chapels, a degree of control exists through canon law, although a strict reading suggests that this is directed at the performance of the activity (e.g. ringing of the bells, Canon F8; choice &c of music Canon B20), rather than the management of that activity, i.e. they impose “output” criteria rather than “input” ones.

In the case of choirs &c, Canon B20 provides that:

“1. In all churches and chapels, other than in cathedral or collegiate churches or chapels where the matter is governed by or dependent upon the statutes or customs of the same, the functions of appointing any organist, choirmaster (by whatever name called) or director of music, and of terminating the appointment of any organist, choirmaster or director of music, shall be exercisable by the minister with the agreement of the parochial church council, except that if the archdeacon of the archdeaconry in which the parish is situated, in the case of termination of an appointment, considers that the circumstances are such that the requirement as to the agreement of the parochial church council should be dispensed with, the archdeacon may direct accordingly.”

There are no provisions relating to the appointment of the ringing master/tower captain (by whatever name called), and none whatsoever relating to the operation of other voluntary groups; however, as an officer of the Bishop, the churchwarden has a general duty “to promote unity and peace among parishioners…[and]…maintain order and decency in the church and churchyard, especially during the time of divine service” Canon E1§4.

In addition to “internal” church controls, bell ringers may seek professional advice from the CCCBR and their local area/diocesan group. Similarly, church and cathedral choirs and organists are supported by the Royal College of Church Music and the Royal College of Organists.

The Guardian reports that at York Minster, the Rev Canon Peter Moger sent a letter to the bell ringers stating that the church aimed to have a “fully trained, motivated and engaged community of staff and volunteers” by 2020. “Following similar changes within our flower-arranging, broderie, collections and police teams, [we] will recruit a head bell ringer, who will then oversee the recruitment and activity of a new team of volunteer bell ringers…In order to begin this process, all current bellringing activity will cease at the minster from today, Tuesday 11 October.”

With regard to safeguarding, earlier this year we considered TH v Chapter of Worcester Cathedral & Anor [2016] EWHC 1117 (Admin) in the post Bellringing, inappropriate behaviour and judicial review. The case was an unsuccessful application for judicial review brought by one of the ringing team at Worcester Cathedral. The proceedings arose out of the circumstances in which: the Chapter revoked the claimant’s permission to be a member of the Guild and to ring the bells at the Cathedral; and the Bishop of Worcester invited to the claimant to sign an agreement that placed conditions on him ringing bells in all other churches within the Worcester Diocese [2].

“3. [Both] decisions arose out of findings that the claimant had behaved inappropriately with children and young people.  There was, and remains, no question of any criminal conduct. The original concerns were investigated by the first defendant, and advice was taken from Worcestershire County Council’s safeguarding officer, known as the Local Authority Designated Officer (“the LADO”).  Both…followed the LADO’s advice.

4. The claimant…complains that the decisions were irrational and unjustified and in breach of his Article 8 rights.  He also complains that the investigation was biased and/or that the decision-making process was unfair because the outcome was predetermined and/or that he was not provided with sufficient disclosure in order to be able to answer it effectively.  In response, both defendants say that the decisions are essentially private in nature and are not therefore caught by Article 8 or amenable to judicial review.  They say that the claim in respect of the first decision is significantly out of time.  In any event, they say that, as a matter of substance, there is no merit in the allegations of irrationality, bias or non-disclosure.”

Although no judicial review appears to be in prospect at York, the circumstances are not dissimilar from those in Worcester, and highlight the dilemma faced by church and cathedral authorities on the action to be taken, and the information released to the public domain; it has been pointed out that in such cases involving children, this is on a “need to know” basis and only a handful of people are usually informed”.

Volunteer groups are used for a wide range of activities throughout the Church, and the events at York have provided an illustration of some of the issues which must be addressed. The CCCBR Guidance on Tower Safety and Risk Management stresses the joint responsibilities of ringers and clergy, and the sentiments expressed in this statement on health and safety are equally applicable to safeguarding:

“You may think that, because you are not working when you are in the tower, health and safety law does not apply. This is incorrect. The law covers any workplace and any person going into that workplace. A church is a workplace for clergy and others and is, therefore, covered. Ringers who enter the church are protected by the law and it is the responsibility of the person in control of the church to protect them. Whilst this means the church authorities (vicar and churchwardens, dean and chapter etc.) carry the legal responsibility, we can hardly expect them to have sufficient understanding of ringing to be able to bear that responsibility alone.
We, as ringers, should recognise that we are usually the best people to advise the church authorities on tower safety to enable them to meet their obligations.
Beyond the legal responsibilities, we should also recognise that we have both civil and moral responsibilities. We would be failing in our Christian duty if we did not adequately protect ourselves, each other and any visitors to the tower. We should also expect that, if we were to be negligent in caring for someone, resulting in injury, we could be liable under civil law.”

8 thoughts on “Volunteers, Safeguarding and the CofE”