Holy Trinity Church, Hull, to become a Minster in 2017

During his visit on 7 November, the Most Rev Dr John Sentamu, Archbishop of York, announced that Kingston upon Hull’s Holy Trinity Church would be re-dedicated as a Minster in recognition of its inspiring regeneration, physically and spiritually. Dr Sentamu will return on 13 May 2017 for a Minster-making service for what has been described as one of the keynote events during Hull’s year as UK City of Culture. In this post we re-examine the York consistory court’s consideration of the reordering of Holy Trinity churchyard and its significance in relation to these recent events. A subsequent post will address the legal and other differences between Cathedrals, Minsters and churches. 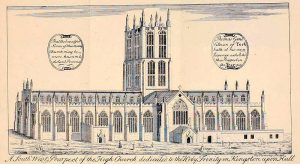 In February we reviewed Re Holy Trinity Hull [2015] Peter Collier Ch (York) in which the petitioners sought a major re-ordering of the churchyard of the Grade I listed church, including:

The proposal in its original and revised form was considered by the Diocesan Advisory Committee in the light of comments made by various amenity societies and of the fact that it was supported by the local authority, which had granted planning permission for the proposed works. The Chancellor noted:

14. It is apparent from the above responses [13 (i) to (x)] that the petitioners have done everything that one could reasonably ask in order to satisfy the very proper concerns of the DAC about the matters that concerned them.

15. The sixty four thousand dollar question in this matter remains whether the petitioners should be permitted to remove the churchyard wall to the extent that they now wish to do, on the basis that with all the safeguards that can be put in place to ensure that the impact of that loss to the historic and architectural environment is kept to a minimum, the loss is nevertheless justified in the greater public interest.

As in adjudications on many such petitions, he applied the guidance in Re St Alkmund, Duffield [2013] Fam 158 in balancing the expected harm to the significance of the church as a building of special architectural or historic interest against the potential benefits to the church and the wider community.

The Petition was unopposed in a formal sense; however, the conditions under which the Chancellor was required to exercise his discretion judicially, as to whether or not to grant a faculty, are well-established: he was required to consider all the relevant factors of which he was aware, including the various representations that has been made about the scheme at any stage in its history and development, particularly those of a critical nature. [16].

Removal of part of wall

Of the many proposed changes to the churchyard, it was the removal of part of the wall that proved most contentious. The Victorian Society considered that this would result in a loss of amenity [21]:

“[The wall] is…unusual in that it forms a complete circuit enclosing Holy Trinity. Quite apart from the wall’s historic and architectural interest, and the contribution it makes to its surroundings, it could, as we have pointed out previously, also serve a practical purpose offering a degree of enclosure and seclusion when the churchyard is in use as a piazza with café seating.”

i.e. the principal loss of amenity that will be caused by the proposed removal of part of the wall is the loss of being enclosed. The Victorian Society also referred to the historic and architectural loss. [22, 23]

However, the Chancellor was not persuaded that the degree of heritage harm contended by the Victorian Society had been established; instead, he took note of the lower level of loss suggested by the CBC and Historic England, based upon which he assessed the loss or harm as “moderate” [29].

Benefits to the Church

The present scheme was followed from a meeting between the churchwardens and the Bishop during a vacancy in late 2009; the churchwardens expressed concern regarding “[the] parlous state of the church, its invisibility in the life of the city, the low attendance at Sunday services, and the frightening state of the finances”. At the suggestion of the Secretary to the DAC, the church commissioned an independent review by Genecon of the options available to help enhance the life of the church in the city, develop a long term sustainability and attract worshippers.

The outcomes of the review were: the establishment of a development group including senior business people; appointment of architects to develop the project; and discussions with the City Council and with the officers of the council who were working to re-model Hull’s public spaces. It was in this context that the plan to make Trinity Square an integrated space of benefit to both Holy Trinity and the city emerged [34]. [Ownership of Trinity Square is split between Holy Trinity and the City Council, and the latter’s half was re-ordered in the late 1990s].

Whilst the church was unsuccessful in the bid for a Heritage Lottery Fund Grant in 2013, in that year that Hull was chosen as the City of Culture for 2017; as a consequence of these events, there was a reappraisal of the scheme and this led to the current proposals to remodel the outside and inside of the church. The current proposal relates to Phase I of the project which is expected to cost a total of £4.5M and will be brought forward by way of separate proposals and petitions for faculties in due course.

Following these initiatives, the church has seen a significant growth in numbers and activities, as well as enjoying an increased profile within the city. Many events have been pioneered in the community, both inviting the community in – for a Real Ale festival and cultural events and also going out to the community in the Trinity Market – holding a ‘Live Nativity’ and taking part in other activities in the bars clubs and cafes in the local area.

In this case, the potential “community benefit” element was clearly identifiable and was linked to city and national initiatives. The Chancellor noted that the City Council was very anxious to make progress with the development of the square to the west of the church and therefore needed to know what would be permitted by way of any re-ordering of the churchyard [9]; it sought “to make Trinity Square an integrated space of benefit to both Holy Trinity and the city” [34] and “it was clear that there was an expectation that Holy Trinity would be one of the key venues for [the City of Culture for 2017]” [35].

The Chancellor stated that he was satisfied that “this part of the wider development plan stands separate from the remainder of the plan [and] makes sense whether or not the rest of the development plan takes place” [43]. He directed that a Faculty shall pass the seal until further order, and allowed 24 months for completion of the proposal [47, 48]. In views of the concerns of the DAC outlined in paragraph 13, the Faculty was subject to certain conditions relating to those issues that had not yet been addressed; these included inter alia [48]:

By their nature, consistory courts judgments seldom reveal many details of the discussions associated with projects involving substantial reordering. However, the civic nature of the redevelopment of Trinity Square and its role in the 2017 City of Culture for Kingston upon Hull have provided the reader with the an indication of the involvement of the church with the city authorities, and how the planned developments have rejuvenated a failing church. The court benefitted from the observations of Chancellor Collier, who was familiar with setting and environs of the church over many years, having watched the development of that part of the city in more recent years [20]. Setting this in the context of the Petition, he commented:

“33. Some things however remain as I remember them – the Market is still there and busy, King Billy still sits on his horse (waiting until he can hear the church clock strike – “let the reader understand”) and Holy Trinity, the largest parish church in England, stands where it has always stood. But what does it stand for? What does its presence announce? Is it the civic pride of the nineteenth century? Is it that this is an enclosed space? Certainly from my own recent observation the state of the churchyard with many broken memorials and a generally unkempt feel says nothing of a positive nature”.

The strongest opposition to the petition came from the Victorian Society, whose comments on an early iteration of the scheme said [4]: “[t]here is very little evident justification for the demolition of a substantial proportion of the nineteenth century churchyard wall … The churchyard wall should be retained and we would object very strongly (their emphasis) to its demolition.” In his assessment of the material before him, the Chancellor provided the following observation, which is probably pertinent to other situations in which there is conflicting advice from the amenity societies:

“28. It is of course easy to understand how it comes about that the Victorian Society places a different value on this heritage asset. As with each amenity society that focuses on one particular part of the heritage it is almost inevitable that at times its deep affection for the period and everything associated with it means that the desire to protect the assets and its statements about their value need to be set in a wider heritage context. It is then that the broader perspective of the CBC and Historic England is a very good test of the assessment made by a more particularly focused amenity society”.