In view of the interest in R (on the application of Miller and Dos Santos) v Secretary of State for Exiting the European Union and associated references, the UK Supreme Court is publishing a range of information and updates to assist those with an interest in following the proceedings in Courtroom 1 from 5 to 8 December 2016.

Case summaries with a brief explanation of the issues at stake in the case can be found here for the respective appeals and references, which are being heard together between 5 to 8 December:

Written arguments (or ‘cases’) of the parties and interveners

Links to the parties’ written arguments are provided, where available online. The Court notes “As the advocates will rely heavily on these documents, they are a helpful resource to read alongside watching the proceedings. We will update this as more papers become available”.

Respondents: The Queen on the application of: 1. Gina Miller; 2 Deir Tozetti Dos Santos

The Supreme Court’s live feed will cover the entire proceedings, with no delay. Additionally, the BBC, Sky, ITN and Channel 4 News are all offering complementary services. We will provide links here once available. Videos of each session will be available to watch ‘on demand’ from mid-morning the day after the respective session, via any of the case summary pages linked to above.

As has been widely reported, the Court’s judgment will not be announced this week. The Court expects that a decision will follow in the New Year, and it will issue an alert in advance of the date of publication.

On the issue of feedback, the Court observed:

“The Justices are aware of the public interest in this case and the strong feelings associated with the wider political questions of the UK’s departure from the EU (which we stress are not the subject of this appeal). The Justices’ duty is to consider the legal questions impartially, and decide the case according to the law. The range of parties and interveners already before the Court is such that the Justices are satisfied that all issues and points of view will be represented. We therefore hope you will understand that the Court is not in a position to consider further submissions or correspondence on the substance of the legal questions before them.

If you have any feedback on the services outlined above, experience any problems in accessing material or spot any mistakes in Supreme Court resources, please let us know by email.” 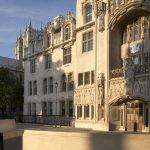 Advice on access to the Supreme Court building during the course of the trial is given on its public access arrangements page. However, “due to limited space in the main courtroom, those interested in the case are strongly advised to watch online using one of the various live web streams rather than travel to the Court and risk the disappointment of not getting a seat in court.”