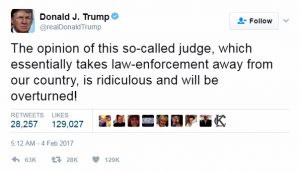 On Thursday, in State of Washington v Trump No. 17-35105, three further (so-called) judges in the (so-called) US Court of Appeals for the 9th Circuit upheld the temporary restraining order issued by Robart J. They declined to grant an emergency stay of the proceedings on President Trump’s Executive Order imposing a travel ban on individuals from seven mainly Muslim countries and a moratorium on refugee admissions, concluding at [3] that

“the Government has not shown a likelihood of success on the merits of its appeal, nor has it shown that failure to enter a stay would cause irreparable injury, and we therefore deny its emergency motion for a stay.”

Hawaii has now joined Washington and Minnesota in challenging the Executive Order.

USA Today suggests that the Executive has four options:

Options 2 and 4 seem to have become the front-runners. The BBC reported yesterday that Mr Trump had told reporters on Air Force One that a “brand new order” could be issued as early as Monday or Tuesday. In addition, however, one of the judges on Court of Appeals for the 9th Circuit has made a sua sponte request that a vote be taken as to whether the order issued by the three-judge motions panel on 9 February should be reconsidered en banc: the latest Supplemental Briefing Order, dated 10 February, is here and the Court has published a helpful explanation of the en banc procedure here.

So what will happen next is anyone’s guess. If, however, Option One is favoured and the matter does end up in the Supreme Court, the Executive has a problem. The Court is currently evenly divided between those generally regarded as liberals and those generally regarded as conservatives. Unless the President’s nominee for the vacancy left by the late Scalia J is confirmed in time – which seems unlikely – the appeal would be heard by an eight-justice court. A majority decision would require a 5-3 vote: if SCOTUS is deadlocked 4-4, the lower court’s decision stands.

Cite this article as: Frank Cranmer, "More on legal developments in the US Muslim travel ban" in Law & Religion UK, 11 February 2017, https://lawandreligionuk.com/2017/02/11/more-on-legal-developments-in-the-us-muslim-travel-ban/