S 43 Education (No. 2) Act 1986 (Freedom of speech in universities, polytechnics and colleges) requires “Every individual and body of persons concerned in the government” of further and higher education institutions to “take such steps as are reasonably practicable to ensure that freedom of speech within the law is secured” for staff, students and visiting speakers. The institutions must ensure, “so far as is reasonably practicable”, that use of the premises is not denied to anyone on any ground connected with their beliefs, views, policy or objectives. On the other hand, the Prevent duty in s 26 Counter-Terrorism and Security Act 2015 requires specified authorities – including relevant higher education bodies – to have due regard in the exercise of their functions to the need to prevent people from being drawn into terrorism.

This is a complex and difficult area; and the Equality and Human Rights Commission has produced a guide for higher education providers in England on equality and human rights law in the context of the Prevent strategy. 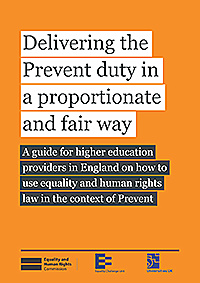 As well as a duty under the Prevent strategy to put systems in place to identify, challenge and address extremism in order to help prevent vulnerable staff and students from being drawn into terrorism, most higher education providers will also have responsibilities under equality and human rights law. The guide is intended for governors with responsibility for ensuring that their institution complies with all its obligations under the law and for Prevent leads with responsibility for identifying risks relevant to the Prevent duty and developing an action plan to mitigate those risks.

In practice, the EHRC expects governors of HE institutions:

The issue was the subject of a consultation at St George’s, Windsor, late in 2016 and the report of the consultation, Freedom of Speech in Universities, has just been published. The areas of disagreement between participants revealed by the report are particularly interesting and worth quoting in full: