This afternoon, the Scottish Episcopal Church discussed the final reading of a proposed alteration to the Church’s Canon on Marriage which would remove the doctrinal clause which states that marriage is between a man and a woman. At shortly later than the expected time, the results of the voting on the first two substantive motions for a second reading were announced. The proposed changes to Canon 22: Of Divine Worship and Administration of The Sacraments and Other Rites and Ceremonies Of The Church (Motion 5) and Canon 31 Of the Solemnization of Holy Matrimony (Motion 6) were carried by the required two-thirds majorities of those present, each house of Synod voting separately.

Synod subsequently considered the amended text of Appendix 26: A Table of Kindred and Affinity, Wherein Whosoever Are Related Are Forbidden By Our Ecclesiastical Laws to Marry Together (Motion 7) and the adoption of Resolution  1 under Canon 31 on the nomination of clerics on behalf of the Church to the Registrar General for Scotland for the purpose of solemnising marriages between persons of the same sex (Motion 8). Both motions were carried.

[The 2016 version of the Code of Canons is available here]

The background to today’s vote and the possible implications are discussed in our posts Church to vote on changing marriage doctrine and Changing marriage doctrine in the SEC – voting procedures. The Very Rev Kelvin Holdsworth, the Provost of St Mary’s Cathedral in Glasgow, has written a more detailed explanation of what is going on, What the Scottish Episcopal Church is Voting On.

The following Press Release was issued by the SEC after Friday’s vote.

The General Synod of the Scottish Episcopal Church today voted in favour of altering the church’s Canon on Marriage to remove the definition that marriage is between a man and a woman and add a new section that acknowledges that there are different understandings of marriage which now allows clergy to solemnise marriage between same sex couples as well as couples of the opposite sex. The revised canon also stipulates that no member of clergy will be required to solemnise a marriage against their conscience.

The voting was in three “houses” of General Synod, namely Bishops, Clergy, Laity and required a two thirds majority to pass. The voting results are as below. 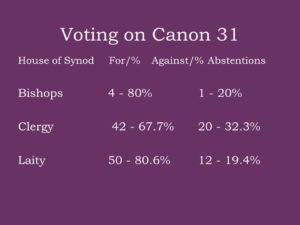 Responding to the voting outcome, the Most Rev David Chillingworth, Bishop of St Andrews, Dunkeld and Dunblane and Primus of the Scottish Episcopal Church said:

“This is the end of a long journey. There was the Cascade Process involving people across our church – the Doctrine Committee paper which explored whether a Christian understanding of marriage could extend to same sex couples. We have studied, thought and prayed.

“In the life of the church, end points are often also starting points. This is a momentous step. By removing gender from our marriage canon, our church now affirms that a same sex couple are not just married but are married in the sight of God. They can ‘leave and cleave’. They can express in marriage a commitment to lifelong faithfulness to one another and to the belief that a calling to marriage is for them too a calling to love, forgiveness, sacrifice, truth. A new chapter opens up – inclusion has taken a particular form. But this same decision is difficult and hurtful for others whose integrity in faith tells them that this decision is unscriptural and profoundly wrong. For them this new chapter will feel like an exclusion – as if their church has moved away from them.

“So the journey which we now begin must also be a journey of reconciliation.

“Every faith community must face the issues which are bound up with human sexuality – in their own way and in their own time. Others will arrive at answers different from ours. And the Anglican Communion, which is embedded in our history and to which we are passionately committed – the Anglican Communion will have to explore whether its historic commitment to unity in diversity can embrace this change.

“I have said this many times before: a vote in General Synod changes the canonical position of our church. But it cannot lay to rest the deep differences which this question exposes in this and every other faith community. “The new Canon itself affirms that there are differing views of marriage in our church. Nobody will be compelled to do anything against their conscience. We affirm that we are a church of diversity and difference, bound together by our oneness in Christ. We shall carry forward in our life two honourable and historic understandings of marriage – one which sees the marriage of same sex couples as an expression of Christ-like acceptance and welcome – and another which says that the traditional view of marriage is God-ordained and scripturally defined.

“That is the journey. That is now the calling of this church. We must and we shall address it with truth, graciousness and acceptance of one another.”

The College of Bishops of the Scottish Episcopal Church will now adopt pastoral guidelines and principles to enable clergy who so wish to be nominated to the Registrar General for authorisation to solemnize weddings of same sex couples”.

“…The Gafcon Primates have asked our Province, the Anglican Church in North America, to take on the task of providing a missionary bishop for Scotland.  Our Province was formed at the direction of Gafcon 2008 after many of the Provinces of Gafcon had provided the same kind of oversight for clergy and congregations in North America.  They have asked us to consecrate Canon Andy Lines…The Consecration will take place on the morning of 30 June in Wheaton, Illinois and the service will include Primates, Archbishops, and bishops from all over the world.  Although the Anglican Church in North America is the consecrating Province, this is an initiative of the wider Anglican Communion…”

Other material provided by GAFCON includes:

“The churches of the Anglican Communion are autonomous and free to make their own decisions on canon law. The Scottish Episcopal Church is one of 38, soon to be 39, provinces covering more than 165 countries around the world.

“Today’s decision by the SEC to approve changes to canon law on marriage is not a surprise, given the outcome of the vote at its Synod a year ago. There are differing views about same-sex marriage within the Anglican Communion but this puts the Scottish Episcopal Church at odds with the majority stance that marriage is the lifelong union of a man and a woman. This is a departure from the faith and teaching upheld by the overwhelming majority of Anglican provinces on the doctrine of marriage. The Anglican Communion’s position on human sexuality is set out very clearly in Resolution 1.10 agreed at the Lambeth conference of 1998 and will remain so unless it is revoked.

“As Secretary General, I want the churches within the Anglican Communion to remain committed to walking together in the love of Christ and to working out how we can maintain our unity and uphold the value of every individual in spite of deeply-held differences. It is important to stress the Communion’s strong opposition to the criminalization of LGBTIQ+ people.

“The primates of the Communion will be meeting in Canterbury in October. I am sure today’s decision will be among the topics which will be prayerfully discussed. There will be no formal response to the SEC’s vote until the primates have met”.

The Most Revd David Chillingworth has issued a response to the Secretary General of the Anglican Communion, which is reproduced here.

Press Release from Church of England

The Church of England has issued the following statement:

Following the vote by the General Synod of the Scottish Episcopal Church to change to its canon on marriage to include same-sex couples, a spokesperson for the Church of England said:

‘We note the decision of the General Synod of the Scottish Episcopal Church to amend its canon on marriage.

‘This is a matter for the Scottish Episcopal Church.

‘However this is a matter on which there is real and profound disagreement in the Church of England.

‘We are seeking to find ways forward rooted in scripture and the Christian faith as we have received it and which values everyone, without exception, not as a ‘problem’ or an ‘issue’, but as a person loved and made in the image of God.”