The sexuality of cakes has become an issue yet again: this time in Dublin rather than Belfast. In May 2016, an unnamed man placed an order with a bakery in Dublin for a cake  decorated with the (slightly garbled) words:

“BY THE GRACE OF THE GOOD LORD, I (name redacted), ORIGINALLY OF (address redacted) and c/o (other addresses redacted) that in my honest opinion – ‘GAY MARRIAGE’ IS A PERVERSION OF EQUALITY and the 34th Amendment to the Irish Constitution should be REPEALED.”

In response to his order, the bakery’s managing director told him that they were extremely busy and had had to close their order-book for bespoke cakes. She estimated that his order would take as long to make as a wedding cake so, as an alternative, she offered to bake the cake but he would have to have it iced and decorated elsewhere. She wrote to him subsequently, stating that the company did not have the expertise to make the cake he requested, that it had been a commercial decision not to make the cake and that his lengthy and aggressive communications were a burden on the company’s resources and on staff morale.

The case came before the Workplace Relations Commission (WRC), which deals with complaints under s.21 Equal Status Act 2000 about discrimination in access to goods and services – on grounds which include religion – that were formerly heard by the Equality Tribunal. The anonymised decision is available here: Adjudication Reference: ADJ-00004390.

The Complainant told the WRC hearing that he was taking action against the bakery as a response to the Northern Ireland judgment in Lee v McArthur & Ors [2016] NICA 29, which we have noted previously. He claimed that the bakery had had no intention of making a cake with the message he wanted and that this amounted to unfair treatment and discrimination on religious grounds. The opening seven words, “By The Grace Of The Good Lord”, made it clear that he was expressing his religious beliefs. He was not asking the bakery to endorse the cake’s message: just to make the cake.

The managing director of the bakery said that she had not known the Complainant’s religion at any stage. She had no difficulty with the wording, but his order was very complicated in terms of its colours and its use of capital letters and, at 49 words long (because, presumably, it included the redacted addresses), the message was much longer than usual. The cake would have taken eight hours to complete; and other orders had been turned away at that time because the bakery’s order-book for bespoke cakes was full. Asked by the WRC adjudication officer if the cake’s wording had been the real issue, she replied that the bakery had not gone beyond assessing whether or not the order was viable – and had decided that it was not.

The adjudication officer concluded as follows:

“The Complainant is required to establish, in the first instance, facts upon which he can rely in asserting that the prohibited conduct has occurred. He must establish a prima facie case of discriminatory treatment and it is only then that the burden of proof transfers to the Respondent to rebut the presumption of discrimination.

By his own admission, the Complainant placed an order for this cake both to test and ‘balance out’ a well-publicised case from another jurisdiction; an outcome with which he clearly disagreed. He also remarked: ‘Why should the law favour people of a gay orientation and not deal with me the same way?’ and ‘What’s good for the goose is good for the gander’.

The Complainant stated that he is engaged in several litigation cases and that he expected from the outset that this complaint would result in a hearing before a third party and some of his actions were taken with that outcome in mind. The Complainant must prove that he has been treated less favourably than another person because of his religious beliefs. I do not believe that prima facie evidence was heard to prove that the Complainant’s order was refused because of his religious beliefs and/or that the Respondent refused to make this cake because the Complainant is a Christian.”

The claim was dismissed. The Irish Times carried a report of the case.

In the earlier version of this note, I explained that I had reported a story in the Belfast Telegraph that the Supreme Court was to hear an appeal in the Ashers Baking case but that, since then, regular searches had revealed nothing whatsoever about the case and I suspected that the reports on which I had relied had been speculative.  Subsequently, I  received a tweet from the Christian Institute confirming that the hearing for permission to appeal is to go ahead: 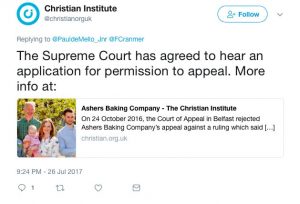 7 thoughts on “Another Great Irish Bake Off: Dublin’s own “gay cake” case”