Sky News reported that, during the course of a hearing last week in the Court of Protection about the treatment of an elderly man who is in a minimally conscious state, Francis J said this:

“It should be compulsory that we all have to make living wills because these cases would be resolved much more easily. We all ought to be encouraged to tackle these issues. If there was some sort of campaign to educate people about these sort of things I think people would actually do something about it.”

The Austrian ban on veiling the face in public comes into force today. Under it, anyone wearing clothes that obscure the face in public can be fined €150 and must remove the offending garment at once if ordered to do so by the police. Those who refuse can be arrested. The Interior Ministry has been issuing posters and leaflets warning of the ban.

The new law is very controversial. In March, Alexander Van der Bellen, the recently-elected President of Austria who narrowly beat a far-Right candidate to take office in January, called for all women to wear headscarves in solidarity with Muslims to fight “rampant Islamophobia”:

“It is every woman’s right to dress how she wants: that is my opinion on the matter … And it is not only Muslim women, all women can wear a headscarf, and if this real and rampant Islamaphobia continues, there will come a day where we must ask all women to wear a headscarf – all – out of solidarity to those who do it for religious reasons.”

HMRC has issued updated guidance on the Gift Aid Small Donations Scheme (GASDS) with the section ‘Community buildings’ revised to clarify how much a charity can claim under the Gift Aid Small Donations Scheme from 6 April 2017. The rules, which were devised at least in part to cater for Churches that have more than one place of worship operating within the same charitable trust, remain very complex nevertheless: the relevant parts are as follows [HMRC’s grammar and syntax, not ours]:

Collections in community buildings from 6 April 2017

If you’re a charity with two or more community buildings, you can claim a maximum of £8,000 on either:

You can choose the option that benefits you the most.

If you’re a charity with fewer than two community buildings, it’s better to claim on small donations collected anywhere in the UK.

From 6 April 2017 you can claim top-up payments on small donations collected at any time, you don’t have to collect them during a charitable activity. The community buildings rules will still apply.

You can’t charge a fee to enter the building (or the part of the building) where the charitable activities take place.

Collections in community buildings before 6 April 2017

If your organisation is connected to another charity, other rules apply.”

In a story based on a Marine Management Organisation Press Release, The Guardian reported that two Buddhists who had released £5,000 worth of non-native crustaceans into the Channel as part of a religious ceremony had been “fined” almost £15,000 for causing environmental damage. They did so as part of a group of almost 1,000 people celebrating the visit of the Taiwanese Buddhist master Hai Tao in 2015. They were performing their rituals in the belief that returning animals to the wild was good karma, rather than creating the significant risk to the marine environment anticipated by the Wildlife and Countryside Act 1981.

Evidently, manifestation under Article 9 does not extend to breaches of environmental legislation on religious grounds. And would you like mayonnaise with that?

In an earlier round-up, we commented that we had refrained from commenting on events surrounding  St. Sepulchre Without Newgate, Holborn (a.k.a. “the National Musicians’ Church”), following the announcement that the church will stop taking bookings from the classical musicians which have relied on it as a rehearsal and concert venue for many years. Following discussions between the parties concerned, the Rt Revd Pete Broadbent, Acting Bishop of London, has issued a statement concerning the broader issues of music within the diocese, on which Dr Andrew Earis, Director of Music at St Martin-in-the-Fields, and former Director of Music at St Sepulchre-without-Newgate commented inter alia [emphasis added]:

“It is regrettable that the Revd David Ingall and the PCC of St Sepulchre’s have not changed their position despite huge pressure from the musicians’ community, the Diocese of London and the wider Church of England. Whilst they have offered positive proposals towards a more significant in-house music programme, they have confirmed that the church will be closed to outside hirers. Church rules mean that it is very difficult, if not impossible, for anyone to overrule this decision.

On this last point, the Church of England permits its incumbents a high degree of autonomy and the situation does not appear to have changed since the 1870s. Responding to the criticism of William Morris on the restoration of the Parish Church of St John the Baptist, Burford, the vicar commented: “the church, Sir, is mine, and if I choose to I shall stand on my head in it’. This inspired William Morris to establish the Society for the Protection of Ancient Buildings which is now one of the national amenity societies whose views are sought on faculty applications. We await with interest the “[re-definition] of what the Musicians’ Church means beyond St Sepulchre’s”.

“And bishops in their shovel hats … in point of fact too many”?

This week we reported that a Press Release has been published on the website of the Revd Gavin Ashenden in relation to his consecration as a missionary bishop to the United Kingdom and Europe. Ruth Gledhill’s piece on Christian Today indicates that he was approached by the Christian Episcopal Church “which regards it as a ‘duty’ to help traditionalist Anglicans across the globe”, and quotes him as saying:

“I will oversee anybody who asks. I have a trail of people coming to my door asking for support, spiritual direction and advice. Obviously my oversight will be informal, it will have no legal basis at all.”

Thinking Anglicans noted the discrepancy between the date on the Press Release (the Feast of St Michael and All Angels, 29 September 2017) and the less auspicious date of its 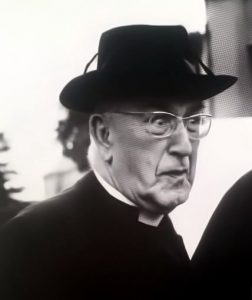 publication, two days earlier. More intriguing, however, was the report on VirtueOnline (“The Voice for Global Orthodox Anglicanism”) which contained a statement from The Rt Revd Robert David Redmile, “Lord Bishop of Richmond, British Columbia, regarding the Episcopal Consecration of the Right Reverend Gavin Roy Pelham Ashenden, Suffragan Bishop in Normandy and England”, which said inter alia [our emphasis]:

“…as the Principal Consecrator of Bishop Ashenden, I should like to make it known at this time that he was duly approved as a candidate for Consecration by the Archbishop and Bishops of the Christian Episcopal Churches of North America; and that he was then duly, lawfully, regularly, and canonically according to the prescribed rites and ceremonies of the undivided Catholic Church consecrated Bishop on the Seventeenth Day of October in the Year of Our Lord 2013, publicly before the face of a Congregation of Christian Faithful in the Pro-Cathedral Church of Saint Saviour, by me the Right Reverend Robert David Redmile, Lord Bishop of Richmond, British Columbia, and assisted therein by the Most Reverend Theodore Chris Casimes, Primate of the Christian Episcopal Churches of North America, the Right Reverend Timothy Joseph Klerekoper, Bishop of Seattle, Washington, and the Right Reverend Nicholas John Geoffrey Sykes, Bishop in George Town, Grand Cayman Island, British West Indies, and Suffragan Bishop of Richmond.

At the time of his Consecration, Bishop Ashenden was appointed to be my Suffragan in Normandy for the Channel Islands and France, and he will continue in that office as well as that of Suffragan Bishop in and for England“.

Not all will agree with W S Gilbert’s Grand Inquisitor, but the Beaker Folk carried a piece Those Independent Anglican Denominations in Full, and whilst some of the comment is tongue-in-cheek, following the links in the post to the (actual) independent denominations cited provides a useful context to recent events.

Commenting on Ashenden’s Press Release, Frank noted that Henry R T Brandreth’s Episcopi Vagantes and the Anglican Church and Peter Anson’s Bishops at Large, first published in 1947 and 1964 respectively, may be purchased on Amazon UK for the combined price of £26.78.

Or in the immortal words of Brenda…

Prompted by the initiative of the Prayer Book Society (PBS) in publishing a new glossary to assist their understanding of The Book of Common Prayer, we have published our own (ecclesiastical) law glossary of terms used in the consistory and secular courts, which we will supplement as appropriate.

This week’s events have already prompted the addition of one expression – episcopi vagantes – but for terms Victorian/legal/Gilbertian terms such as “shovel hat”, readers will need to go elsewhere. [On this, Wikipedia explains “The shovel hat was a style of hat formerly associated with the Anglican clergy, particularly archdeacons and bishops. The hat was usually made of black beaver or felt, and had a low, round crown and a wide brim, which projected in a shovel-like curve at the front and rear and was often worn turned up at the sides”].

Whilst a “complex high value overpayment case” is far beyond our remit, we are sure that all our readers will have a degree of sympathy with Judge Wikeley in reaching his decision in the Upper Tribunal Administrative Appeals Chamber in AF v SSWP (DLA) (No.2) [2017] UKUT 366 (AAC). His reasoning commences unpromisingly:

[3]. Indeed, I was so concerned that in my ruling granting permission to appeal on the first time around appeal, I described the case as a “car crash”. Moreover, taken together with its companion appeal, JF v Secretary of State for Work and Pensions (DLA) [2015] UKUT 266 (AAC), I described it as a “mini motorway pile-up” (see [2015] UKUT 266 (AAC) at paragraph 9, citing paragraph 4 of the permission ruling). It only gets worse second time around”.

Have Christians who support cross-dressing in schools actually read the Bible? asks Norman Tebbit in The Telegraph. Er, yes, Norman: some of us actually have. Anyway, we’re far too busy burning clergy daughters who’ve been on the game to argue with the likes of you: Leviticus 21:9.

The end of the world didn't happen today – but the news came too late for an "And finally…": https://t.co/6HyTtlT2vA

… but Messrs D Trump and K-J Un are no doubt working on it.