An incredibly busy week, but at least everyone’s had an extra hour in bed…

In a judgment of 13 October, Mr S T Uncles v NHS Commissioning Board and others [2017] UKET 1800958/2016, an Employment Tribunal held that a “philosophical belief in English nationalism” was not a protected characteristic in the terms of s10 Equality Act 2010. The ET applied the test in Grainger Plc & Ors v Nicholson [2009] UKEAT 0219/09/0311 and concluded that, though the views expressed were genuinely held, were a belief about a weighty and substantial aspect of human life – namely national identity – and were serious, cohesive and important, they were nevertheless incompatible with the human dignity and fundamental rights of others. The claim failed: we noted it here.

In the other important employment case of the week, Mr R Page v NHS Trust Development Authority [2017] UKET 2302433/2016, an Employment Tribunal held that opposition on grounds of conscience to adoption by same-sex couples was not protected by equality legislation and the ECHR. It concluded that even if Article 9(2) was engaged, any limitation placed on the Article 9 rights of the claimant – whose appointment as a Non-Executive Director of the Kent and Medway NHS and Social Care Partnership NHS Trust because of his views – was necessary and proportionate in all the circumstances” [58]. We noted it here.

(Incidentally, why do ETs insist on citing their decisions as “Mr”/”Mrs”/”Ms” A B? Other courts and tribunals don’t do that, and it renders the indexes fairly useless.)

Finally, the BBC and others reported that Felix Ngole, a second-year Master’s student on a social work course at Sheffield University had lost his petition for judicial review in the Administrative Court. He had been excluded from the course by the Faculty of Social Sciences Fitness to Practise Committee after comments he posted on Facebook about his personal opposition to same-sex marriage. He had argued that fitness to practise was a matter for the professional social work bodies rather than for the University. In R (Ngole) v University of Sheffield [2017] EWHC 2669 (Admin) Rowena Collins Rice, sitting as a Deputy High Court Judge, rejected his claim.

“Our day will come”

The BBC reports that Ms Helen Scott, the only Roman Catholic employee at plumbing firm Stevenson & Reid’s showroom in east Belfast, has been awarded £20,000 by the Fair Employment Tribunal, which found that she was “discriminated against, harassed and victimised on the grounds of her religious belief or political opinion and constructively unfairly dismissed”, after a colleague had shouted Tiochfaidh ár lá – an Irish republican slogan which means “Our day will come” – into her face in what Ms Scott claimed was “a menacing manner”.

The Tribunal ruled that Ms Scott’s line manager “chose to use a phrase with an obvious and acknowledged sectarian significance” and that “the ground for the offensive treatment of the claimant… was her religion or political opinion”. Her line manager was therefore guilty of harassment. The principal reason for her resignation had been the breach of the implied term of trust and confidence and she had therefore suffered an unfair constructive dismissal.

[Compiled from the BBC report: the judgment is now on the FET website and we hope to post a note on it later in the week.]

This week, we updated the information in the 2013 post on Real-Time Information (RTI) and filing for employees’ Pay As You Earn (PAYE) which came into operation on 6 April of that year: the earlier post has been taken down. Like its predecessor, it is still extremely boring, but we hope that it will nevertheless be of interest to at least some of our readers. Unfortunately, PAYE just isn’t inherently exciting.

In last Sunday’s round-up, we mentioned the case of the Breton parents who had been refused permission to call their baby son “Fañch”, on the grounds that French officialdom does not permit the use of the tilde. The BBC has now reported another fracas about naming a child: this time, it’s a couple in Toulouse who want to call their baby son “Jihad”. The report also notes that, in 2015, a French court prevented a couple from naming their baby girl “Nutella” after the hazelnut spread, on the grounds that it would make her a laughing-stock (which, in fairness, it probably would). The judge ordered that she be called “Ella” instead.

The Bishop of Durham has announced that Adrian Iles is to be the new Chancellor of the Diocese of Durham; he is a member of the Legal Office of the National Church Institutions and currently Deputy Chancellor of the Diocese. Adrian will take over from the Revd and Worshipful Canon Dr Rupert Bursell QC, who has served as Chancellor from 1989 and retires in November 2017. The Diocese will formally say farewell to Rupert Bursell during Evensong in Durham Cathedral on 25 November. 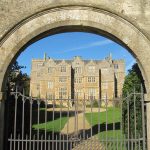 Readers who saw the first episode of the BBC One’s new series Gunpowder may not be aware of the legal implications of the punishment Peine forte et dure by which one of the characters, Lady Dorothy Dibdale, met her end. Wikipedia explains:

“Peine forte et dure (Law French for ‘hard and forceful punishment’) was a method of torture formerly used in the common law legal system, in which a defendant who refused to plead (‘stood mute’) would be subjected to having heavier and heavier stones placed upon his or her chest until a plea was entered, or he/she died.

The most notable case in England was that of Roman Catholic martyr St Margaret Clitherow, on whom the incident was based; however, she was pressed to death on 25 March 1586, twenty years before the events depicted in the episode and therefore during the reign of Elizabeth I. On the subject of historical authenticity, we should point out that although Robert Catesby owned Chastleton House and Estate until 1604, the inset photograph is of the present property, built betewen1607 and 1612.

Peine forte et dure was abolished in Great Britain in 1772 and was last used in 1741. St Margaret Clitherow was canonized by Pope Paul VI in 1970. In the Catholic Herald, Fr Alexander Lucie-Smith commented, “‘Gunpowder’ may be violent, but that’s how England treated Catholics”. Whilst Daily Telegraph’s observation “the Church of England was not always as cuddly as it is these days”, Margaret Clitherow was tried and sentenced under civil law.

Last week, another website put up one of our posts – in full – without asking our prior permission. We occasionally cross-post items that have appeared elsewhere but we always do so with the permission of both the author and the website. Equally, if anyone wishes to cross-post something from L&RUK, a polite request will almost certainly be given an affirmative answer. But asking first is simple good manners.