Last week we cross-posted – with permission – the initial thoughts of Michael Sadgrove, Dean Emeritus of Durham, on the report of the Cathedrals Working Group. This is his follow-up.

Last week I blogged about the report on cathedrals produced by a working group under the chairmanship of Bishop Adrian Newman and now published as a draft for consultation. I warmly welcomed the report as a real attempt to get to grips with cathedral governance in the light of the recent difficulties experienced at two cathedrals, Peterborough and Exeter.

I need to say a little more, not least following discussions I’ve had since the publication of the report. The first point is a general one. Several times the report asks us not to cherry-pick the recommendations but accept them as a package. I think they will (in the words of a well-known politician) have to whistle for it. It’s not realistic to imagine that the reviewers will have got everything right, even when the consultation period is over and their final report written. It’s true that some of the recommendations inevitably have implications for others, but that’s the way of things. No text is so perfect that it can’t be improved in the light of wise and patient discernment.

A central theme of the report concerns accountability. In particular, there has been a lot of discussion about the proposed direct accountability of residentiary canons to the dean (and of lay cathedral staff through the chief operating officer). I have to recognise that what follows is inevitably the perspective of a retired dean – though before serving as a dean in two cathedrals (Sheffield and Durham), I was myself a residentiary (at Coventry), one of its two full-time “Commissioners’ canons”. It may be a case of “well he would say that, wouldn’t he?” But let me try to be as objective as I can.

I regard canons residentiary as senior roles in a cathedral, and agree with the report that exceptional gifts and talents are needed in those who are going to lead in key aspects of a cathedral’s mission such as worship and music, education and learning, pastoral care and outreach. I was 37 when I became canon precentor at Coventry. That fitted the profile of the report that wants to see younger men and women appointed to these posts because they offer unrivalled opportunities for the formation and development of future leaders (not only as deans, I should say). But at Coventry, my fellow Commissioners’ Canon was an older, more experienced man from whom I learned a great deal as I tried to understand the Cathedral and my role within it. So I don’t buy the apparent implication that residentiary canonries should no longer be offered to those who, through their long years of parish or sector ministry also have distinctive insights to bring to cathedrals.

Indeed, perhaps only an older ordained colleague on the Chapter will have the confidence (or do I mean courage?) to challenge the dean when necessary. No team leader should be exempt from this. “Challenge” does not mean behaving seditiously or subverting the leader’s authority. It means asking necessary questions so that decisions are properly scrutinised and the best outcome achieved. My experience of working with Chapter colleagues who in age have been more or less my peers was that even when their exacting questions (“challenge” is not too strong a word), were uncomfortable, they were for the best. I encouraged colleagues to speak up. I strongly discouraged deference (not that my colleagues were much given to it!). Our debates were robust at times. But because we were all trying to act in the best interests of the cathedral, I believe we were working together in an essentially healthy culture.

However, a team will only function well when roles are clearly defined and understood (this is a subtext of much of this report). This applies to its leadership. To me it is clear that the dean must be allowed to lead. He or she needs to be acknowledged as the head of a religious foundation, that is, the body corporate of the cathedral, and therefore as the leader of the senior “ministry team”, i.e. the dean-and-residentiary-canons, as well as chair of the chapter as the governing body. The accountabilities flow from this. In day to day terms, I don’t see how the canons could not be accountable to the dean as members of his or her team. Provisions about ministry development review (MDR) flow from this (though not necessarily exclusively – for it remains the bishop’s prerogative to review anyone who holds his or her licence, including the dean and canons).

But this needs to be understood in quite a sophisticated way. Because according to the Cathedrals Measure, the ultimate accountability of both dean and canons is to the chapter itself. So the day to day relationships of canons to the dean expresses their common loyalty to the chapter. The dean has no authority independent of the chapter (except in the very limited ways spelt out in the Measure). His or her role is to be its guardian, its representative and its mouthpiece. Which is why a dean is always primus inter pares presiding over a governing body and a ministry team that are collaborative in every aspect of their work. If this is the presumption (and how could it be otherwise in today’s church?), residentiary canons have nothing to fear from the new arrangements for governance and management that are proposed in the report.

However, as I’ve said before, no system of governance is better than the human beings who inhabit it. The best structures in the world won’t protect cathedrals from abuses of power and status – and unfortunately, these don’t simply reside in the pages of the Barchester novels. Only virtues like wisdom, self-awareness and emotional intelligence, married to a shrewd reading of human nature, can ensure that it all works as it should to serve the cathedral’s mission. This highlights the importance of having a values statement as well as a purpose statement so that it’s clear not only about what the cathedral exists to do but how it will behave in pursuit of that purpose.

But there does seem to me to be an anomaly in the report. I alluded to it in my previous blog. The review is very hot on accountability within the cathedral institution, and it is right to be. Yet when it comes to the chapter’s own accountability, it weakens it considerably. It’s true that it recommends that cathedrals are brought into the regulatory framework of the Charity Commission, and that makes sense to me. However, top-level oversight of that kind can never be enough. There is a need for rigorous scrutiny to which executive bodies in every institution should be subject, if only to provide public assurance reports that all is as it should be. This is where the council comes in at present. I have to say that particularly in Durham, we took this very seriously (not least thanks to the quality of the council chair who had (has) wide experience in the corporate world). The discipline it imposed on the chapter was invaluable.

So while not all deans agree, I remain puzzled that the report removes the legal requirement for the council to hold the chapter to account on behalf of the bishop, diocese and wider community. Audit committees are necessary for scrutiny, but as committees of the chapter they don’t have the necessary independence. The report wants to see a “quinquennial inspection” of the cathedral’s operations, and this is welcome, but that too doesn’t provide for continuing oversight and answerability. Bishops’ visitations remain an option but because of their complexity and cost, they tend only to be invoked when problems arise in cathedrals. (In nearly 30 years of cathedral ministry, I never experienced one.) So to write the legal functions out of the council’s brief seems to me to be a mistake. It could open the way for a badly-led chapter to behave autonomously and even recklessly in the way some were famously accused of doing before the Cathedrals Measure of 1999. And if (God forbid!) a cathedral ever suffered under a mad, wicked or incompetent dean, who, in the absence of the council (for which this is one of its statutory functions), would petition the bishop to instigate a process for his or her removal?

Enough for now. There’s another big question that continues to exercise me and it’s this. Running a cathedral well, even a small one, is a big assignment. And while the chapter is the body legally responsible for the life of its cathedral, it takes a special combination of spiritual wisdom, theological insight, emotional intelligence, self-awareness, organisational ability and leadership skill to equip a dean to lead such a complex entity. My question is, what do we look for when deans are appointed? What is a good dean? I’d be sorry if deans ended up as no more than ultra-competent CEOs of their cathedrals. If they did, what would be the point of deans being ordained at all? Discuss! 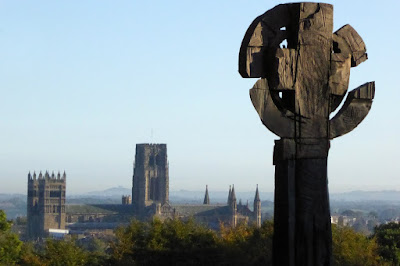