The Law Society Gazette reports that Jeremy Corbyn has entered the fray over the “cab-rank rule” adopted by HM Senior Coroner for Inner North London, Mary Hassell, for processing deaths in her coronial district. According to the report, he and the Shadow Attorney, Emily Thornberry, have written to the Chief Coroner, HHJ Lucraft QC, to the effect that Ms Hassell’s approach is “unacceptable” and that grieving relatives are experiencing “unnecessary delays and barriers to laying loved ones to rest”. It also notes that other coroner services, including Salford and Bolton, have adopted magnetic resonance imaging scans in autopsies, removing the need for “invasive post-mortem techniques that go against a number of religious practices”.

On the application of Adath Yisroel Burial Society, the High Court has given permission for judicial review proceedings of Ms Hassell’s policy. Watch this space. 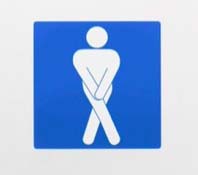 with Ozleworth [2017] ECC Glo 3 provided the Daily Telegraph with the copy for its article, Vicar sparks row with parishioners over ‘undignified’ church toilet plan. There was a certain sense of déjà vu in that comments of some of the objectors appeared to be straight from Gary Alderson’s Writes of the Church, attributed to “the esteemed Major J Dumpling, of Tremlett”. 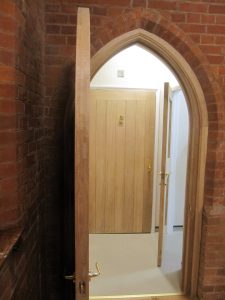 However, concentration by the media on these statements – that “lavatories in a church is a current fad” and “toilets attract children” – drew attention away from the actions of the petitioners in the case, which seem to have been modelled on those of the Government’s Brexit team. Our own views on this component of the significant reordering at St Mary the Virgin are included in the post “…and a nave with en suite facilities“. These considerations are quite timely since, on Thursday, David (and others in the parish) had the opportunity of viewing the newly reordered Holy Trinity, Charlton, with its new kitchen and toilet facilities (left).

The Telegraph also reported on another Gloucestershire case, Re St Mary Magdalene Adlestrop [2017] ECC Glo 2, in which the Rector and Churchwardens petitioned to install a 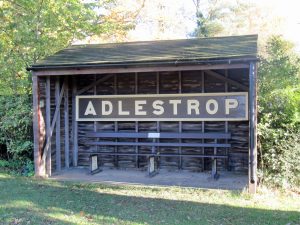 heraldic hatchment with the coat of arms of the Collins family of Adlestrop Park in the nave or in the north transept of the church. This was reported as Jane Austen ‘shrine’ church in row with historian over plans to commemorate estate’s new owners. However, whilst noting that many people would “remember Adlestrop“, Chancellor June Rodgers commented “The Jane Austen connection does not preserve in aspic this Church. As the Leighs succeeded Evesham Abbey, so the Collins family is now in residence. Another layer has been added to the life and continuity of this village”. The judgment is conditional on the formal approval of the hatchment by a Herald from the College of Arms. Readers may have their own views, and although we will be interested in points of law that this raises, L&RUK is not the vehicle for expressing other concerns regarding the judgment.

In Re St Leonard Birdingbury [2018] ECC Cov 1, the Chancellor refused permission for a retrospective faculty authorising the retention of a memorial which did not conform to Churchyard Regulations. However, he stated that approval would be given to a memorial meeting these requirements, and to the use (in quotation marks) of “I thought her the Queen of the Land” and other symbols reflecting the Irish Heritage of the deceased. The quotation was taken from “a traditional Irish folk song popularised by the Dubliners group” [6], which readers will recognize as The Black Velvet Band; they will also probably agree that it is better if the quotation is used at face value and not in the context of the song.

A reminder that the Ecclesiastical Law Society’s Day Conference and AGM will be held on 17 March at the St Bride Foundation, Bride Lane, Fleet Street, London EC47 8EQ 2018, from 10:30 to 16:00: registration and refreshments from 9.45.

The Conference will focus on promoting education in ecclesiastical law and training of clergy and others in ecclesiastical law. The Revd Dr Andrea Russell, Queen’s Foundation Birmingham, who practised as a solicitor before ordination, will outline the context for church law education in the wider setting of ordination training, and the need for clergy to be aware of the legal framework of their ministry. Other speakers will be Stephen Borton, Ecclesiastical Manager at Lee Bolton Monier-Williams, The Ven Simon Baker, Chair of the Society’s Education Sub-committee and Sue de Candole, Registrar of the Dioceses of Winchester and Salisbury.

The cost is £55 for members of the Society, £65 for non-members. Further details here.

Quote of the Day

Wednesday’s ‘Quote of the Day’ on The Brief Newsletter @TimesLaw was from Russell Sandberg’s post A Fear of Sharia: why the Independent Report is a wasted opportunity

“We still do not know enough about the activities of sharia councils to know how and the extent to which they operate in a way that is incompatible with English law and which discriminates against minorities within minorities”.

We would, however, recommend that you read the full article.

Euronews reports that a Spaniard, Daniel Serrano, was fined €480 for photoshopping his face on to a crucifix, in breach of the law against “attacks against religious feelings”. The crucifix in question is known as the Cristo de la Amargura (Christ of Bitterness) and it belongs to a Brotherhood that takes part in Seville’s Good Friday parade.

Ignacio Gonzalez Vega, of Jueces para la Democracia (Judges for Democracy), says that the sentence violates Mr Serrano’s freedom of expression and that it would not survive an Article 10 challenge at Strasbourg. Trouble is, to do that you must first exhaust domestic remedies – and Mr Serrano is currently picking olives to raise the money to pay his fine. Presumably the courts of Spain – like those of England and Wales – are, as Lord Justice Mathew (or, possibly, the dreadful Mr Justice Darling) once observed, “open to all men – like the doors of the Ritz Hotel”.

The winner of the Cardiff Law Great Legal Bake-Off … and the book we’ve all been waiting for. 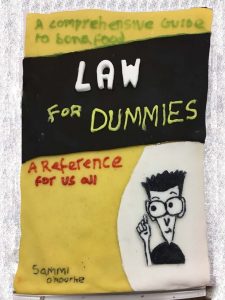