Reforming the law on surrogacy

The project is expected to start in spring 2018 and to be completed within three years. Both Commissions conclude that reform of the current law “will deliver significant benefits of clarity, modernity and the protection of those who enter into surrogacy arrangements and, most importantly, of the children born as a result of such arrangements”.

Trouble up at t’Charity Commission

Damian Collins, Chair of the Commons Digital, Culture, Media and Sport Committee, has written formally to the Culture Secretary, Matt Hancock, to say that after the Committee’s pre-appointment session with Baroness Stowell on Tuesday its unanimous conclusion was that it “cannot support the Government’s nomination” of her for Chair of the Charity Commission. Bs Stowell, a Conservative peer, was the Leader of the House of Lords until 2016. She has said that if appointed as Chair she will resign from the Conservative Party and sit in the Lords as a cross-bencher.

Collins, who pointed out that this was “the first time that this Committee has not supported the government’s candidate, and it is not a decision that we have taken lightly” said that the Committee had four main areas of concern:

“Experience: Baroness Stowell has little more than 6 months of negligible charity sector experience and a complete lack of experience of working for a regulatory body. According to the Government’s Code on Public Appointments, individuals selected by Ministers for public appointments must possess the ‘skills, experiences and qualities […] to meet the needs of the public body or statutory office in question.’ In addition to this, Baroness Stowell was unable to demonstrate to the Committee any real insight, knowledge or vision for the charities sector.“

“Neutrality: the candidate was a longstanding Government Minister less than two years ago. The fact that Baroness Stowell had a political career is not itself a bar, and the candidate has publicly committed to giving up the Conservative Whip upon appointment. However, her political past is a source of concern for the Committee and those within the charity sector. As the umbrella body for voluntary organisations, NCVO, told us in written evidence, ‘perceived independence – being seen to be independent – is just as important as actual independence. Charities cannot afford for their regulator to be anything other than beyond all suspicion’.”

“The recruitment process: … The process has lacked transparency and has been protracted … While we have been told that two other candidates were deemed appointable, we have not been given their names (despite Committee staff seeking this information.) We would like to request this information again: ie. the names of the other appointable candidates, and why Baroness Stowell was chosen over them?“ [bold in original] (The Committee also “thought it regrettable that candidates for public roles of the kind we scrutinise apparently continue to be drawn from a narrow group of establishment figures”, of whom Bs Stowell was a further example.)

“Performance: Cabinet Office Guidance on Pre-Appointment Scrutiny stipulates that ‘The candidate will need to be able to withstand parliamentary and public scrutiny should they take up post and the Committee may wish to test this.’ On this occasion, it is our judgment that Baroness Stowell was unable to withstand scrutiny. Members asked fair questions that gave the candidate the opportunity to demonstrate her knowledge, skills and experience. Indeed, several Members made proactive efforts to tease out relevant examples of her interest in, and vision for, the sector, and were disappointed to receive answers that were often lacking in detail or relevance.“

Ouch. But it will, of course, make not one jot of difference to the outcome. According to the report in Civil Society, Hancock has indicated that he will press ahead with the appointment regardless. In a statement he said:

“I’m sure Tina Stowell will be a brilliant chair of the Charity Commission. This is a crucial time for the Commission and the sector. She was appointed after a fair, open and transparent competition. She was not only the best candidate for the job, but is the right candidate and has my full backing”.

“That would be an ecumenical matter”

On Friday morning, the House of Lords gave a second reading to Lord Deben’s Private Member’s Bill Ecumenical Marriage Bill, HL Bill 21 of 2017–19,  a Bill of which the Church of England said:

“We see no need for Lord Deben’s Bill, and believe that the current arrangements give sufficient pastoral flexibility for weddings which are conducted in Anglican churches and chapels, involving people of different denominations”.

According to Christian Today, the Roman Catholic Church has said it views the Bill as unnecessary; it also runs contrary to the convention where for the past 100 years, Parliament has tended not to introduce legislation that affects the internal affairs of the Church of England unless that legislation was proposed by the Church itself.

On a practical matter, Clause 1(2) provides that:

“Marriages … may only take place by the permission of the incumbent, the Parochial Church Council and the bishop of the diocese, and in the case of a Royal or other peculiar, instead by permission of the Ordinary”.

Given its conjunctive nature, there would seem to be little possibility of its practical application if it ever became law. We are sure that there is a suitable riposte from within Fr Jack Hackett’s (limited) vocabulary.

On Thursday, we dabbled in the arcane world of hatchments and posted Heraldic memorials in churches, a review of Chancellor Rodger’s judgment Re St Mary Magdalene Adlestrop [2017] ECC Glo 2 concerning the introduction of a hatchment in memory of the late wife of one of the church’s benefactors. In the world of heraldry we learned that “Lordship of this or that manor is no more a title than Landlord of The Dog and Duck”, and should one wish to have a coat of arms,  “Tests for eminence are very wide in that they include possession of a university degree or a professional qualification”.

Why one would is therefore beyond us, but as the Chancellor commented:

“If people want to buy their own coat of arms they may do so for various reasons … which can be satisfied for the price far less than for a flashy watch or car. People who never had nor needed a coat of arms can, apparently, in most reasonable circumstances, obtain one if they want it. It is a free country”.

Against an undercurrent of “village tittle tattle” and dissatisfaction that “the PCC had failed to recognise the work … of others in the village who had helped”, a faculty was granted subject to confirmation of heraldic niceties by a Herald from the College of Arms.

Whilst the media often sensationalizes and misinterprets consistory court judgments, we had no complaints regarding Olivia Rudgard’s article in the Daily Telegraph, Churches must switch off CCTV cameras during services as prayer should be private, court rules. This was a condition attached to the faculty for installing two CCTV cameras in a church, Re St Mary Chartham [2017] ECC Can 1. The Ecclesiastical Law Association summarized the case:

“The petitioners wished to install two closed circuit television (“CCTV”) cameras in the church and a recorder in the vestry, to enable the church to be left open during the day. The Commissary General granted a faculty (subject to conditions) and set out in her judgment the principles and guidelines to be followed in respect of future applications for the installation of CCTV equipment”.

No other Consistory Court judgments are thought to deal with the topic, and consequently, we will post a fuller case report within the next few days.

Bed, breakfast and discrimination in Hawaii

Which reminds you of? [With thanks to Howard Friedman.]

The fourth edition of Mark Hill’s Ecclesiastical Law will be published in March. The 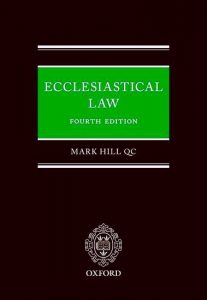 fourth edition has been fully revised and updated to take account of significant changes in the substantive law, specifically: the effects of the Ecclesiastical Jurisdiction and Care of Churches Measure 2018 and the overhaul of the procedure in the Consistory Court in consequence of the Faculty Jurisdiction Rules 2015; substantial repeals in the Statute Law (Repeals) Measure 2018 and the new procedure under the Legislative Reform Measure 2018; the effect of the House of Bishops’ Declaration on the Ministry of Bishops and Priests concerning provision for traditionalists; and the role of the Independent Reviewer under the Priests (Resolution of Disputes Procedure) Regulations 2014. Materials include the Canons of the Church of England, together with the Measures and Rules (updated to 2018) regulating the faculty jurisdiction and clergy discipline.

The cover price will be £150, but it will be on sale direct from OUP at the promotional price of £120: quote promotional code ALFLY5F to claim the 20% discount.

Classical music’s divorce from God has been one of the great failures of our times. Eh??? Even if you agree with the hypothesis, hardly on a par with climate change, the refugee crisis or the rise of the alt-right.