IICSA begins hearings on the Church of England, Ireland clears the way for a referendum on abortion and the President of the Supreme Court tackles the vexed question of niqabs in court.

The Supreme Court website has posted the text of Lady Hale’s Sultan Azlan Shah Lecture, given at Oxford in January, on religious dress and, in particular, on the vexed issue of Muslim women wearing niqab veils in court. In a nutshell:

“… in this particular context, it is face coverings and not other items of dress which present the dilemma. We do take it for granted in this country that observing a person’s facial expressions, body language and general demeanour are an important part of assessing their credibility … And our adversarial trial system depends crucially on testing a witness’s evidence through cross-examination – I suspect that most advocates would find it difficult to imagine how one would cross-examine a witness whose face one could not see. Others have questioned whether that is, in fact, so – particularly as demeanour is so culturally determined. What seems shifty to us may in fact be a mark of respect in the witness. But the same expectation should be applied to all witnesses – the ingredients of a fair trial should be the same for all, regardless of their religious or other beliefs.”

Commenting on Bougnaoui v Micropole SA [2017] EUECJ Case C-188/15, she observes, in parentheses, “(I do not find it helpful to refer to the hijab as a veil)”. Neither do we: the tendency of French-language judgments to use “voile” as a general term means that it is sometimes difficult to know what item of religious dress is at issue. And, almost as an afterthought, she concludes her discussion of Mandla v Dowell Lee [1982] UKHL 7 – about a private school that had discriminated against a Sikh boy by refusing to admit him unless he removed his turban and cut his hair in accordance with the school rules – with the comment: “Nowadays, I suspect that the school could have found a better reason”. We should be interested to know what that better reason might be: we honestly can’t think of one.

The text notes that after the lecture was delivered the Judicial College published an updated, expanded and improved version of the Equal Treatment Bench Book which includes guidance on religious dress and wearing the veil (including the niqab and the burqa) in court  – but Lady Hale’s lecture is well worth reading nonetheless.

The Irish Supreme Court has ruled in M & ors v Minister for Justice and Equality & ors [2018] IESC 14 that the unborn do not have inherent constitutional rights beyond the right to life in the Eighth Amendment of the Constitution and noting at [13.3] that “While it does not alter the outcome of this case, the Minister is accordingly not obliged to treat the unborn as having constitutional rights other than the rights contained in Article 40.3.3.”

In doing so, it has cleared the way for the abortion referendum planned for the end of May. The Taoiseach had decided that it was prudent to wait for the Supreme Court’s judgment in M & ors before finalising the exact wording of the referendum question and fixing the date.

IICSA and the CofE

On 5 March, the Independent Inquiry into Child Sexual Abuse (IICSA) began its three-week public hearing into the extent of any institutional failures to protect children from sexual abuse within the Anglican Church. The IICSA has provided comprehensive coverage of the hearing, including: timetables, here and here, copies of the documents presented; transcripts of the daily proceedings and live streaming via the IICSA website (subject to a short delay). The latter has been supplemented by most useful Twitter reporting @InquiryCSA presenting summaries of the main events of each day as they occur.

The proceedings and media coverage have been summarised comprehensively by Thinking Anglicans and others, although the daily transcripts provide a more reliable indication of the events than some headlines. A separate post addressing the issues of legal interest is in preparation and will be posted towards the conclusion of the hearings.

Mandatory reporting has been strongly advocated by Mandate Now, which in early March published Church of England Safeguarding is Dysfunctional and Can Have No Reliance Placed Upon It | A Review by Mandate Now. After the first day IICSA hearing, Richard Scorer, a specialist abuse lawyer for Slater & Gordon who represents a number of abuse victims, suggested in a post on the NSS web site

“the overarching question for IICSA, through this [Day 1] and the subsequent hearings, is whether the Church of England’s safeguarding can safely be left to the church or needs independent oversight…

“IICSA needs to look at radical solutions. I invited them to consider two radical changes in tandem: an independent body to oversee the conduct of safeguarding in the church; and mandatory reporting…”.

Whilst clearly applicable beyond the Church of England, it will now be necessary for the IICSA to take the government’s view into consideration when formulating its recommendations. However, this also raises issues for the Church to consider, for regardless of the government position, it would be possible to strengthen its own requirements mandatory reporting with its canon law.

Confirmation of the election of Bishop of London

On Thursday 8 March, the Archbishop of Canterbury and the Court of the Vicar General sat at the church of St Mary-le-Bow to confirm the election of the Rt Revd Sarah Mullally to the See of London. In a move to address any potential disruption by a frequent complainant against the ordination of women as bishops, the Vicar General’s Court of the southern Province sat earlier in the week to hear his views.

Lancashire CC consultation on the supply of halal meat

Lancashire County Council is in the process of reviewing its current policy on the supply of halal meat to schools, and its on-line consultation closed on 7 March. The Council had voted to stop supplying un-stunned non-poultry meat to schools and other establishments last October, but in January decided to reconsider its policy after the Lancashire Council of Mosques (LCM) threatened to seek judicial review of its decision and encourage a boycott of school meals.

The Church of Scotland has produced a new resource to help congregations provide pastoral support to people who identify as being transgender and their friends and families. The booklet, entitled Diverse Gender Identities and Pastoral Care, was created following a request to the General Assembly in 2016 to ensure that local congregations are sensitive to these particular needs of this community. A copy of the 30-page booklet has been sent to every Kirk congregation.

Forthcoming conference: Charity, Religion and the State: An Uneasy Relationship 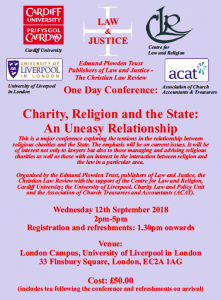 The new Chair of the Charity Commission, Baroness Stowell, addressing the meeting of aid and development charity chiefs on safeguarding:

“Quite simply: the public expect charities to be selfless, not self-interested institutions. They expect charities to have good aims, and to pursue those aims according to common standards of human decency. It’s vital for all of you as leaders to understand that, however noble your cause, it doesn’t provide immunity from these basic expectations. No cause, however noble, provides a licence to justify unacceptable means. It is the combination of why you exist, what you achieve, and how you do it that generates the nation’s pride and people’s support.

Next month, Prince Charles is due to visit the Pacific archipelago of Vanuatu where his father Prince Philip is revered as a god. In Christian Today, the Revd Mark Woods has written Why do these Pacific islanders worship Prince Philip as a god? Perhaps Mark should guest write the next Heir of Sorrows column in Private Eye, based upon an imagined briefing by his father? Until then, read and enjoy his piece in CT and learn more about the Cargo Cult, John Frum (whom the people of Tanna believe is Prince Philip’s brother), and the Prince’s views on the doctrine of the resurrection.

[PS: are cargo cults a special case of the “prosperity gospel“? – FC]