Local elections apart, such a quiet week that on Saturday The Sun led with the story that a bloke was buying a suit…

…and the newspaper both created and solved the Church Mystery: Grave of woman who died in 2011 mysteriously appears in cemetery overnight next to her mum’s plot. The assistance of its readers was sought regarding the circumstances leading to the placement of a new plaque to  the lady in question, Eunice Eales, which was spotted by the vicar of St Margaret’s, Quadring, Lincolnshire as far back as December.

In the event, it proved unnecessary to alert Lincolnshire’s finest or the Time Team “gyophys” boys, as this appeared to be an issue of record keeping by the previous incumbent. The family are reported to have spent some time with the former priest  discussing “the right stone, with the right lettering, to comply with [Churchyard] regulations”.

So far, so good, but subsequently a family member “went straight round to B&Q and bought some green kerbstones and some lovely gravel … bought some plants and shrubs and made the grave look lovely again”. Perhaps that’s the part of the Diocesan Churchyard Regulations which wasn’t discussed. A human interest story with wide media involvement clearly demands sensitive handling, but we hope that there would be enough flexibility within the system to enable an amicable pastoral solution to be achieved.

On Monday, Melbourne Magistrate’s Court committed Cardinal George Pell for trial on “at least three” charges of sexual offences. Crux reports that, following a four-week committal hearing, the Court dismissed some of the most serious charges of “historical sexual offences” but committed him on the remainder. Pell is currently on leave of absence from his post as the Vatican’s Secretary for the Economy. Neil Addison explored the matter further here.

On 23 April, the Diocese of Truro reported that the historic, listed St Day Old Church is to be handed over by the Church Commissioners to a new organisation dedicated to its future as a community resource. The building, constructed in 1828, served as the parish church until structural problems forced its closure in 1956; it was abandoned, vandalised and under threat of collapse until in 1988 the St Day Old Church Appeal was launched with the intention of saving it for community use. A programme of fundraising and stabilisation works was implemented and the building was open to the public for some 14 years before its long-term future became uncertain. This has now been resolved.

The “ecclesiastical toy fort” description was that of Sir John Betjeman, and whilst 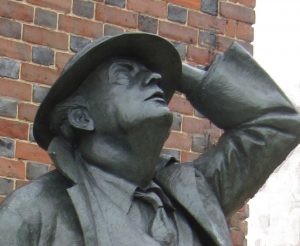 the media suggested that St Day was his “favourite church”, others vying for this title are St Endellion in which he frequently worshipped, and St Enodoc Church, Trebetherick, where he is buried. For pub quiz enthusiasts (?), the current St Day  parish church web site notes that it is the only place in the country to be named after the 6th Century Breton monk; St Endellion is similarly unique.

In holyGhost GmbH v European Union Intellectual Property Office [2018] EUECJ T-439/16 [in French], the applicant company sought to annul the refusal of EUIPO to register “holyGhost” as a trademark: EUIPO’s reasoning had been that it was too similar to an existing trademark, “HOLY”, registered in 2013.

Fairly marginal, except that “it was for the applicant, if applicable, … to demonstrate that the expression ‘Holy Ghost’ as a reference to the Holy Spirit had fallen into disuse” [17]. Which, evidently, the applicant failed to do: the Court concluded that it was not necessary to rule on the conceptual differences in the trademarks that would be perceived as a result of consumers associating “ghost” with “phantom” [65]. The application was dismissed.

A case for the Stool of Repentance?

On 1 May, Charles George QC, Dean of the Arches and Auditor, sent the following letter to The Guardian concerning its description of consistory courts as “rarely used and archaic”:

“It is wrong to describe the Church of England’s consistory courts as “rarely used and archaic” (Relatives ask bishop to halt development of graveyard, 1 May). According to your article, this Ribble Valley graveyard lies within the diocese of Blackburn. The Ecclesiastical Law Association’s admirable, free website shows that there were 12 reported judgments of that diocese’s consistory court in 2017, apart altogether from numerous unreported decisions. Consistory courts operate under statutory provisions which are routinely updated, and their jurisdiction is primarily concerned with regulating proposed works on consecrated land.”

The Guardian is not the only newspaper to be under this misapprehension. we reviewed the issues facing the developers of the graveyard referred to in the article in our post Re-use of institutional burial grounds.

Nothing to do with religion but a must for tort law buffs. When Hazel Tyrell was 15 months old, her mother Colette bought a number of bottles of “SuperValu Kid’s Water Pure Irish Water” in Balbriggan. Later that day, she gave Hazel one of the bottles; and after Hazel had drunk the water, her mother noticed something floating inside the bottle which, on closer inspection, proved to be an earwig. In a sworn statement she said that two days afterwards, Hazel had developed a swollen eyelid and spots on her body. Drogheda Hospital said that it was probably a mild allergic reaction and the symptoms resolved over the following 24 hours.

3 thoughts on “Law and religion round-up – 6th May”