This week, the forthcoming deadline for GDPR has inevitably featured strongly – but there was other stuff as well

The blog and the GDPR

On Thursday, we published a post in which we stated our intention of deleting the e-mail addresses of all existing e-mail subscribers on 24 May, which means that those who wish to continue receving e-mail notifications will have to subscribe afresh. It’s incredibly tedious for us and it’s no doubt irritating for some of our subscribers, but it seems to us to be the simplest GDPR-compliant option. We shall be issuing an e-mail reminder nearer the time.

The ICO has published its final Consent Guidance – dated 9 May – ahead of the 25 May GDPR deadline. The updated Guidance sits alongside the ICO’s Guide to the GDPR and gives more detailed, practical guidance for UK organisations on consent under the GDPR. It notes that the GDPR sets a high standard for consent and that ‘consent’ means offering people genuine choice and control over how their data is used. When consent is used properly, it helps build trust and enhance an organisation’s reputation.

The Guidance is intended to help organisations to decide when to rely on consent for processing and when to look at alternatives. It explains what counts as valid consent, and how to obtain and manage consent in a way that complies with the GDPR. It also sets out how the ICO interprets the GDPR, and the ICO’s general recommended approach to compliance and good practice.

And at a church near you…

…Parishes and the GDRP

…And then there’s the PECR

In common with other blogs, this site sends automatic e-mails to subscribers each time we post. This raises the issue of whether a notification in one of our posts which refers to something for sale – a book or a conference – constitutes ‘marketing’ for the purposes of the Privacy and Electronic Communications Regulations (PECR), which sit alongside the Data Protection Act and the GDPR and give people specific privacy rights in relation to electronic communications. Thus it is not the post itself that is the issue, it is the e-mail communication. Currently it is uncertain how these provisions will work in practice, or whether there is a degree of flexibility through the so-called “soft opt-in” to PECR, although this is clearly intended for customers of retail organizations.

At present, we just do not know the answer and as such, until there is further clarification, we will not include announcements about new publications and conferences for which there is a charge, lest we inadvertently fall foul of the PECR.

[Note for legal anoraks: the Privacy and Electronic Communications Regulations are secondary UK legislation (The Privacy and Electronic Communications (EC Directive) Regulations 2003 SI 2426) which implements the European Directive 2002/58/EC, also known as ‘the e-privacy Directive’. However, the EU General Data Protection Regulation (GDPR) is primary EU legislation and, as an EU Regulation, requires no domestic implementing legislation. The new UK Data Protection Bill [HL] 2017-19 , which passed its Report Stage (HC) on Wednesday 9 May, will repeal the Data Protection Act 1998 and include both GDPR requirements and other provisions not covered by the GDPR.]

In the wake of the judgment in R (Adath Yisroel Burial Society & Anor) v HM Senior Coroner for Inner North London [2018] EWHC 969, The Telegraph reports that the Chief Coroner, HHJ Mark Lucraft QC, is currently drawing up guidance on prioritising cases which will be  issued to coroners and published on the Chief Coroner’s online guidance page by the end of the month. It is understood that it will include a direction that coroners should take into account the religious requirements of families when deciding whether to prioritise the burial of their dead.

Humanism and religious education in Wales

The Welsh Government’s Cabinet Secretary for Education has written to local authority Directors of Education on the issue of persons who hold non-religious beliefs, such as humanism, being given full membership of Standing Advisory Councils on Religious Education (“SACREs”) and Agreed Syllabus Conferences (“ASCs”). Circular 10/94, published by the former Welsh Office in 1994, stated that their inclusion would be contrary to existing legal provisions. However: “it is now the view of the Welsh Government that:

In Bakkali v Greater Manchester Buses (South) Ltd (t/a Stage Coach Manchester) [2018] UKEAT 0176/17/1005, the claimant, a Moroccan, had mentioned to a colleague, Mr Cotter, a report by a German journalist who had been to Syria and spoken to Islamic State. He quoted some of journalist’s comments, including “Mosul … was a ‘Totalitarian State’, and that they [IS], are trying to enforce law and order upon its subjects, and that they are confident and proficient fighters…” Later, in the works canteen, Mr Cotter asked Mr Bakkali “Are you still promoting IS/Daesh?”, following which there was an incident between Mr Bakkali and another driver, Mr Tomkinson, in front of Ms Marie Green, a canteen worker. She reported Mr Bakkali for what she regarded as aggressive behaviour and he was suspended and, after an investigation, dismissed for gross misconduct.

The Employment Tribunal rejected his claims for direct discrimination and harassment. It found that, though Mr Cotter had made the alleged comment, in context he had made it because, after their previous conversation he had understood that Mr Bakkali was promoting ISIS. The ET therefore concluded that Mr Bakkali had not proved that the bus company had treated him less favourably because of his religious belief, nor that Mr Cotter’s remark had been made because he was a Moroccan national.

On appeal, the issue was whether the ET had failed to apply the correct statutory test for harassment in s.26 Equality Act 2010 – whether the conduct complained of was “related to” the religious belief or race of the claimant – and had instead applied the direct discrimination test in s.13: whether the conduct was “because of” those protected characteristics. Slade J concluded that the ET had been entitled to take into account the context in which the offending words had been spoken and, though another ET might have reached a different conclusion, it had applied the correct test for whether the conduct complained of constituted harassment within the meaning of s.26 Equality Act and it had not erred in law. Appeal dismissed. [With thanks to Neil Addison.]

The Berlin Labour Court [Arbeitsgericht] has ruled that Berlin’s neutrality law banning teachers in public schools, police officers and judicial employees from wearing any kind of religious dress is not unconstitutional.

In 2015, the Federal Constitutional Court had ruled that a law in North Rhine-Westphalia that banned hijabs but exempted “Christian and Western educational and cultural values or traditions” from the ban was unconsitutional. The Labour Court concluded, however, that the Berlin law regulated the relationship between the religious freedom of public servants and the principle of religious neutrality of the state in a manner that was permissible under the Constitution and that the interest of the State of Berlin to ensure a religiously-neutral environment in its elementary schools overrode the applicant’s right to manifest her religion. [With thanks to Dr Georg Neureither.]

On 11 May, the House of Bishops of the Church of Ireland issued a Press Release and Statement on Human Sexuality in the Context of Christian Belief to its General Synod which was taking place in the Armagh City Hotel, Armagh, 10th – 12th May 2018.  Elsewhere in the Anglican Communion, on 9 May, the Anglican Church in New Zealand paved the way for the blessing of same gender relationships. Anglican Taonga reports

“… by majority vote, General Synod/Te Hinota Whanui passed Motion No 7 – which is the motion which accepts the report and recommendations of the Motion 29 small working group.

That acceptance is subject to the appointment of a select committee which will consider and report back to General Synod…on a range of detail which the Synod must be sorted before the passage of the constitutional and canonical changes necessary to give the decision effect”.

The Anglican churches in Polynesia are opposed to the blessings of same gender marriages, and although they will not vote against the proposal, they will not change their practices in this matter, here.

However, in Australia following the passing of legislation on same sex marriage in December last year, the bishops’ opposition which was decided at their annual meeting, held in March in Canberra, has at last become known, here and here.

On Thursday, Royal Assent was given to the following Measures:

The operative provisions of four of the five Measures will be brought into force on such day as the Archbishops of Canterbury and York may by order jointly appoint: the Legislative Reform Measure came into effect on Royal Assent.

One that, as Cardiff graduates, we couldn’t resist. Cardiff Council owns a 1963 Rolls Royce Phantom that was last used in an official capacity in 2002. It has been kept in storage for the last 16 years and, for the last three, has cost the authority £590.85 in running costs – to take it for its annual MOT. Apparently its registration is KG1: presumably the Council is waiting for a Knight of the Garter with more money than sense to pitch up. 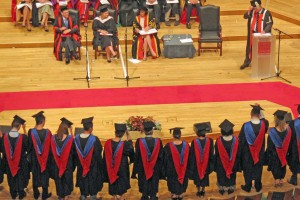 It has been suggested that “with Windows 10, Microsoft decided to try and mash browsing, organizing, and viewing all together in one application, with some basic editing to boot. The result, the innocuously-titles ‘Photos’ app, can be less than intuitive”.

Indeed. David was amused to find that his Photo app had categorised the photograph of the degree ceremony at Cardiff in 2013 as “#martial arts”, (although coincidentally, this reflects the interests of the photographer).