Mrs Tini Owens sought to divorce her husband, Hugh, on grounds of the irretrievable breakdown of her marriage, arguing that his behaviour had been such that she could not reasonably be expected to live with him within the meaning of s.1(2)(b) Matrimonial Causes Act 1973. She cited various incidents, including occasions where he was alleged to have made disparaging or hurtful remarks to her in front of third parties. Mr Owens defended the case, arguing that the examples of his behaviour that she had cited did not satisfy the requirements of s.1(2)(b). Both the judge at first instance and the Court of Appeal rejected her petition.

In Owens v Owens [2018] UKSC 41, the Supreme Court unanimously rejected her appeal – though it did so with obvious reluctance. Lord Wilson (with whom Lord Hodge and Lady Black agreed) said that Mrs Owens’s appeal generated “uneasy feelings”: that the procedure was

“inapt for a case which was said to depend on a remorseless course of authoritarian conduct and which was acknowledged to appear unconvincing if analysed only in terms of a few individual incidents; an uneasy feeling about the judge’s finding that the three incidents which he analysed were isolated in circumstances in which he had not received oral evidence of so many other pleaded incidents; and an uneasy feeling about his finding that Mrs Owens had significantly exaggerated her entire case in circumstances in which Mr Owens had not disputed much of what she said” [42].

But uneasy feelings were “of no consequence in this court, nor indeed in any other appellate court” [43]. In the circumstances, her complaints about the first-instance judgment had already been analysed and dismissed by the Court of Appeal, while permission for her further appeal had been “founded upon a novel interpretation of the subsection which at the hearing – and in the event correctly – she abandoned” [43].

In the circumstances, therefore, her appeal had to be dismissed [44]. Whether or not to change the law was a matter for Parliament. [45]

Lady Hale PSC had found it “a very troubling case” [46] and she had several misgivings about the trial judge’s judgment: his repeated reference to “unreasonable behaviour”, which was “convenient but deeply misleading shorthand for a very different concept” and it could “lead to a search for ‘blame’, which is not required … Worse still, referring to “unreasonable behaviour” can also lead to a search for who is the more to blame, which is also irrelevant” [48]. The judge appeared to have thought that the behaviour complained of had to be the cause of the breakdown of the marriage: “That is … simply not the law” [49].  Thirdly, the case had depended upon the cumulative effect of a great many small incidents said to be indicative of authoritarian, demeaning and humiliating conduct over a period of time:

“Those who have never experienced such humiliation may find it difficult to understand how destructive such conduct can be of the trust and confidence which should exist in any marriage … The problem … is that this hearing was not set up or conducted in a way which would enable the full flavour of such conduct to be properly evaluated. But what are we to do about it?” [50].

Given that the principal problem was that the hearing at first instance had not enabled the court to evaluate the petition as a whole and in context, the case should properly go back for a rehearing, even though it could not be assumed that “a properly instructed and constructed hearing” would inevitably lead to a decree being granted [52]. The correct disposal would, therefore, be to allow the appeal and send the case back to be tried again; but Mrs Owens’s counsel had dismissed that possibility both in the written submission and in oral argument, since:

“It would place the appellant in an unenviable dilemma, given that, in February 2020, five years will have elapsed from their separation and, should the petitioner still wish to be divorced, it is difficult to see that there would be any obstacle standing in her way” [53].

Lady Hale was therefore “reluctantly persuaded” that the appeal should be dismissed [54].

Lord Mance largely agreed with Lord Wilson as to the law [55] and the unsatisfactory nature of the proceedings at first instance [58]; however, he did not believe that the trial judge had not ultimately applied the correct test to the allegations [56].

The family law group Resolution was an intervener in the case. Nigel Shepherd, its former chair, said that while the Supreme Court had – reluctantly – applied the law correctly, the result confirmed the need for the Government to take urgent action to address what Resolution described as a “divorce crisis”:

‘In this day and age, it is outrageous that Mrs Owens – or anybody – is forced to remain trapped in a marriage, despite every judge involved in the case acknowledging it has come to an end in all but name. Today’s judgment underlines just how vital it is that Government now urgently reforms the divorce law.”

Which is difficult to dispute. 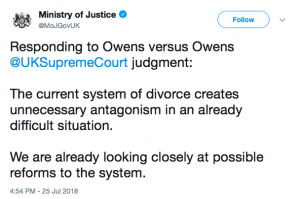