The big news of the week was the announcement by the Justice Secretary of a consultation on the introduction of no-fault divorce in England and Wales (so big that both of us posted on it simultaneously: Frank subsequently took his down). The issue of contested divorce on the grounds of unreasonable behaviour came to public prominence as a result of the judgment in Owens v Owens [2018] UKSC 41, in which the Supreme Court unanimously – but with obvious reluctance – rejected Mrs Tini Owens’s appeal against the refusal of the lower courts to grant her a divorce opposed by her husband: we noted it here.

As well as seeking opinions on the issue of “fault”, Reducing family conflict: Reform of the legal requirements for divorce seeks views on the minimum period for the process between the decree nisi and the decree absolute, to allow couples time to reflect on the decision to divorce and to reach agreement on arrangements for the future where divorce is inevitable. As a caveat, however, the Government recognises that there may be exceptional circumstances in which it may be desirable to retain the ability for a spouse to defend a divorce petition: for example, if one party lacks capacity to make an informed decision to seek a divorce.

The consultation will run for 12 weeks and close on 10 December. Responses may be made online here.

A year ago, we reported the case of a twelve-year-old Rastafarian boy, Chikayzea Flanders, a pupil at Fulham Boys School, which demanded that he cut off his dreadlocks to adhere to its uniform policy. We wondered whether that might be unlawful, in light of the judgment in G v St Gregory’s Catholic Science College [2011] EWHC 1452 (Admin) in which Collins J held that the refusal to allow an Afro-Caribbean boy to wear his hair in cornrows was unjustified indirect race discrimination.

The BBC reports that the family has now reached an agreement with Fulham Boys School: according to the school Chikayzea, who has since moved to a different one, is welcome to return “provided that his dreadlocks are tied up so that they do not touch the top of his collar, or covered with a cloth of colour to be agreed by the school”. Following the agreement, the county court ordered the school to pay Chikayzea and his mother a settlement and cover their litigation costs.

David Isaac, Chair of the Equality and Human Rights Commission, which helped fund the legal action against Fulham Boys School, said: “We are pleased that the school has acknowledged their failings in this instance and has agreed to revise its policies.”

The offence of blasphemy in Ireland…

… is on its last legs. Dàil Éireann is to take the First Stage of the Thirty-seventh Amendment of the Constitution (Repeal of offence of publication or utterance of blasphemous matter) Bill 2018 on 18 September.

On Tuesday, the ECtHR will be handing down judgment in Lachiri v Belgium (no. 3413/09).  The case concerns Ms Lachiri’s exclusion from a courtroom because she refused to remove her hijab.

The task of rebuilding the ELA website is continuing following the catastrophic breakdown of its host’s server and the loss of the material on the site and on the back-up. There were 500-600 consistory court judgments and summaries on the old website, and these are in the process of being reinstated. In the meantime, judgments continue to be handed down, and this week Ray Hemingray circulated seven new judgments and summaries of the main points.

Following the pattern of our August round-up of consistory court judgments, these, together with subsequent judgments this month, will be included on our September round-up, together with links to the full judgments on L&RUK; this will probably be the future modus operandi for new judgments. In addition, the revised ELA site now includes a page on recently-received judgments, which readers will probably find useful.

With regard to access to past cases, the former URLs will no longer be effective, as happened when the CofE changed its own website last year. Some of the past judgments under the general headings of reordering, exhumation and memorials have now been uploaded to the rebuilt ELA site; however, the new architecture of the site is not compatible with unique URLs for individual cases, and consequently we will modify our earlier post to direct readers to these general headings, under which the required judgment may be found. However, in new “stand-alone” posts, we will upload any judgment cited onto our site. 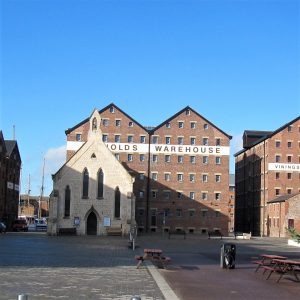 An interesting judgment in the latest batch is Re the Mariners Church Gloucester [2018] ECC Glo 2 in which Chancellor June Rodgers granted a faculty for the reordering of this 19th-century proprietary chapel, which has only relatively recently become subject to faculty jurisdiction. The chapel was built to cater for the bargees and seamen who worked in or visited the dockland area of Gloucester:

“[3]. …The plainness and the simplicity of the building was not damaged by the fluctuating congregations whose behaviour, whether in drink, fighting, swearing or spitting on the floor might not, sadly, have been appreciated in many inner city churches in Gloucester in the period. This building could and did cope with all this”.

Its rather convoluted history, which makes for an interesting read [1 to 7], comments:

“[7]. …the building managed to wriggle out of the Faculty jurisdiction notice by, it would seem, keeping its head down over the years. Indeed, there has been confusion as to whether the church was ever consecrated”.

The many alterations over the years were done without any thought about obtaining a Faculty, and demonstrate how:

“[17]. …the wisdom (however boring and time consuming) of the Faculty jurisdiction which would have stopped this current mess, and the DAC could have given advice as to how what was being proposed could have been done better”.

Particular attention was paid to the “small partitioned area against the back wall…described as the vestry”.  No record exists of its construction on which the Chancellor commented:

“[18]. …I am prepared to say that almost anything might be better designed and more appropriate for that space. It looks like a small builders’ shack that has migrated inside this church. Inside it resembles, if there is such a thing, a sort of clerical man-shed. In this plasterboard erection are kitchen units, and on its roof, at least in 2013 were stored arched boards detailing past chaplains and benefactors”.

Nevertheless, the congregation has now outgrown the church and the Chancellor granted, in effect, outline planning permission for the proposed scheme; its full details and funding must be further worked up, in discussion with the DAC and then approved, but fundraising for this work can now proceed.

“The U OxHRH J is dedicated to advancing the study of international and comparative human rights law. It publishes the highest levels of scholarship tackling the most pressing and challenging human rights issues and offers critical insights into current issues, debates and global trends. The driving impetus behind the journal is the recognition that many academic institutions, NGOs, policy-makers and individuals are unable to afford the cost of high-quality, refereed journals.”

They can say that again: some journals are becoming eye-wateringly expensive, even for established academic libraries, though they will make a print-on-demand edition available for those who prefer a hard copy.

The first edition is devoted to a series of papers around the theme, ‘A Better Future for Women at Work’, none of which are relevant to the concerns of this blog. However, it’s certainly one worth watching for the future. 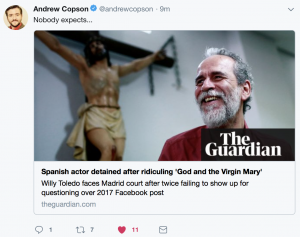 Dr Ed Peters: “Professors of canon law never had it so good. No longer need we convince students of the importance of [Roman Catholic] Church law. We simply invite them to look around and see for themselves what some five decades of ignorance, disregard, and recently, thinly-veiled contempt for law in high places, brings in their wake. And presto! case made”.