Your weekly exotic spresm of law and religion odds and ends…

China and the Vatican

Yesterday, the Vatican announced that it had signed a Provisional Agreement with the People’s Republic of China on the appointment of Bishops: we posted the text of the Agreement and the subsequent statement by the Secretary of State, Cardinal Parolin, here. Cardinal Zen, former Archbishop of Hong Kong, was not amused.

Ireland’s abortion law will continue to be regulated by the Protection of Life During Pregnancy Act 2013 until the Oireachtas passes new legislation. Under that Act – enacted as a result of the tragic death of Savita Halappanavar – abortion is currently legally available as a last resort where the woman’s life is at “real and substantial” risk and the foetus is not yet viable.

And in Northern Ireland…

The Commons Women and Equalities Committee has announced an inquiry on abortion law in Northern Ireland. The Committee notes that in June 2018, the  Supreme Court dismissed an appeal against the current law on abortion on the grounds that the Northern Ireland Human Rights Commission did not have standing to bring the case; however, though the Court did not make a formal declaration of incompatibility a majority expressed the view that the current law is incompatible with Article 8 ECHR in cases of fatal foetal abnormality, rape and incest. The Committee is seeking views on the following :

The deadline for written submissions is 10 December.

In which connexion, The Guardian reports that a woman is challenging the decision of the Public Prosecution Service for Northern Ireland to prosecute her for unlawfully procuring and supplying abortion pills contrary to the Offences Against the Person Act 1861. She got the pills in 2013 for her then 15-year-old daughter, who terminated her pregnancy. The judicial review is the first in which prosecutors have faced a direct challenge over a decision relating to the criminalisation of abortion in Northern Ireland. The hearing opened on Thursday at the Royal Courts of Justice in Belfast and was adjourned until November to allow the Supreme Court decision on incompatibility with the ECHR to be taken into account.

This week we reported that the Church of England had appointed Meg Munn, former MP and Government Minister, with a professional background in child and adult safeguarding issues, as the first independent chair of the Church of England’s National Safeguarding Panel (NSP). The news was generally well received, and in The Guardian she said:

“I have worked with survivors and have seen first-hand the impact, which can be devastating and lifelong … Institutions such as the Church of England need to be open and transparent about the past and develop good safeguarding practice for the future. But only deep cultural change can bring about the transformation that is needed.”

However, in his closing statement to the IICSA Peter Ball hearing, Day 5, 27 July, Ian O’Donnell, counsel for the complainants, victims and survivors represented by Slater & Gordon, asserted that “Changing the culture and values of an institution such as the Anglican Church … does not guarantee a change in that institution’s behaviour” and that legislation that externally enforced mandatory reporting was necessary.

An early indicator of her approach to holding the Church to account will be how she envisages mandatory reporting to be addressed, given the unlikelihood that the Government itself will introduce such legislation in the short term.

The IICSA is to hold the first of its two seminars on mandatory reporting on 27 September, and next week’s will look at existing obligations to report child sexual abuse in England and Wales and at the experiences of other countries where mandatory reporting legislation exists. Despite the generally unrealized potential for faith groups to hold their clergy to account, religious institutions will not feature in the formal presentations; these focus on education, the social services, the medical profession and the role of the police. Given the paucity of statutory legislation on safeguarding, the briefing document is unsurprisingly light on legislative enforcement in England and Wales, although it comments on the duty within s130 Social Services and Well-being (Wales) Act 2014 and that added by s74 Serious Crime Act 2015 to the Female Genital Mutilation Act 2003.

Comments on the current legislation are in our post Child sexual abuse, safeguarding failures and mandatory reporting.

In August, we mentioned a BBC report that the Labour Court in Sweden has ruled, in a split 3-2 decision, that a Muslim woman whose job interview was ended when she declined to shake the hand of a male interviewer for religious reasons had been unfairly discriminated against and a report in The Guardian that Lausanne had refused to grant a Muslim couple’s citizenship application because of their refusal to shake hands with members of the opposite sex. The Guardian now reports that the Danish Government is proposing to include a compulsory handshake in the naturalisation ceremony and that some mayors – who conduct the ceremonies – are extremely unhappy about the proposal.

AG Wahl has published his Opinion in Oeuvre d’assistance aux bêtes d’abattoirs (Protection of animals at the time of killing – religious rites) [2018] EUECJ C-497/17 O, in which the question referred by the cour administrative d’appel de Versailles was whether or not EU law prohibits the issue of the European “organic farming” label to products from animals that have been ritually slaughtered without pre-stunning. AG Wahl concludes that it does not – but we’ll see what the CJEU decides before commenting further.

“Visiting a church once on holiday and writing in the visitors’ book ‘So peaceful… so English’ does not deal with the gutters and the damp or the bats. Tourists do not rod drains, churchwardens do”: per Rodgers Ch in Re the Mariners Church Gloucester [2018] ECC Glo 2 [32].

Well, not necessarily. Visiting St Olaf Wasdale Head a few years ago, I noticed that the gutters – just above head height – had got partially blocked. So I did the neighbourly thing and cleared them out: it couldn’t have taken me more than ten minutes [FC]. 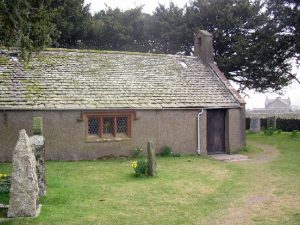 [Photograph by Humphrey Bolton, published under the CCL]