Not the “not just Betjeman….” Literary Festival which takes place 20 to 27 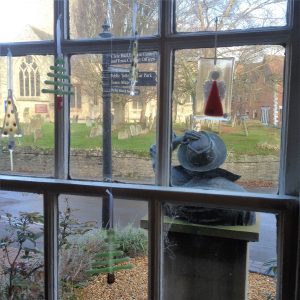 October, but the announcement last week for Vicar Wantage Parish on the diocesan website. The latter provides an interesting segue to our post, Oxford job ad creates stir concerning an earlier advertisement by the Diocese for a male priest to fill the vacancy of  St Barnabas and St Paul, with St Thomas the Martyr, Oxford.

Perhaps the recent advertisement should attract headlines such as Wantage job ad doesn’t create stir; the parish’s requirement for a priest who will “accept the ministry of all called to ordination” is far more significant that maintenance of the status quo at St Barnabas.

Elsewhere in Oxfordshire, but exempt from the Licensing requirements of the CofE, has been the appointment of Fr Andrew Foreshew-Cain as Chaplain to Lady Margaret Hall. Fr Andrew was the first Anglican vicar to marry his same-sex partner, contrary to Church of England rules. The appointment is for the current Michaelmas term, and it therefore seems unlikely that he will have the opportunity to install Post Office facilities in the LMH chapel, as in his former incumbency at St James, West Hampstead.

We have avoided commenting on recent legal moves around Brexit and Article 50 on the basis that there are umpteen blogs out there far better qualified to do so than we are, combined with a general reluctance to tangle with Scots law. However, as many readers will be aware, in September the Inner House of the Court of Session asked the CJEU for an advisory opinion on whether or not Members of Parliament could revoke the Article 50 withdrawal process underlying Brexit without the agreement of the other 27 EU states.

In the Outer House the Lord Ordinary [Lord Boyd] had held that the matter was hypothetical; however, his ruling was overturned by the Inner House [the Lord President, Lord Menzies and Lord Drummond Young], which then sought an advisory opinion. The Government, unsurprisingly, disagreed; and Scottish Legal News reports that the Advocate General is seeking leave to appeal the matter to the UK Supreme Court. If successful, the UK Government is expected to ask separately for the Court of Session to withdraw or sist its original reference to the CJEU.

Which is interesting. As The Herald pointed out on Friday, the hearing could have various possible outcomes:

But appeal what, precisely? The Herald suggests that, under the Court of Session Act 1988, the Court’s decision to seek an advisory opinion from the CJEU appears to be final and cannot be appealed to the UKSC. It also reports a UK Government spokesperson as saying:

“We were disappointed by the decision of the Court of Session and are seeking to appeal it in the Supreme Court. But it remains a matter of firm policy that we will not be revoking the Article 50 notice, and we will not comment further on ongoing litigation.”

Beverley McLachlin on the rule of law

And while we’re on controversial stuff like the courts doing their jobs, The Times reports (£) that at a lecture in Cambridge on Tuesday, Beverley McLachlin, until recently Chief Justice of Canada, argued that the principles and institutions underpinning the rule of law are under increasing attack even in Western democracies. According to The Times, she told her audience that assaults on the rule of law were not confined to eastern Europe; and while democratic and judicial institutions had held their ground in the US they “find themselves increasingly under attack”. She suggested that judges and prosecutors responsible for the impartial administration of justice were being seen as standing in the way of good government rather than as an essential part of it: “When judges in the United States overturned presidential immigration orders, President Trump undermined their legitimacy by calling them ‘so-called judges’.” She also cited the notorious “Enemies of the People” headline in the Daily Mail.

Referring to Tom Bingham’s book, The Rule of Law, she said: “We have moved from the unquestioned assumption of the importance of the rule of law that prevailed when Lord Bingham wrote his treatise in 2010, to a place of uncertainty” and suggested various reasons for the “mood swing”: a fear of terrorism and unlimited migration from foreign countries, increasing religious intolerance and technological change. Unsurprisingly, she argued that the rule of law might be slow, messy and involve endless discussion and compromise but that it was still the best system of governance: “Churchill was right: democracy grounded in the rule of law is the worst system of government, except for all the others.”

The importance of all this for the law and religion community cannot be overstated: not merely because McLachlin regards increasing religious intolerance as part of the problem but also because, as the rule of law is nibbled away, freedom of thought, conscience and religion – the freedom to believe and, just as important, the freedom not to believe – starts to come under threat. And does anyone in his or her right mind really want rule by decree?

The BBC carries a full report. Its home affairs correspondent, Dominic Casciani, notes that these are the first official national count of the perceived religious target of a hate crime since ministers ordered all police forces to keep a tally – and the number of offences targeted at Muslims or Jews was far greater than their respective proportions of the population of England and Wales. He also suggests that the detailed monthly figures also confirm that moments of tension such as the 2016 Brexit vote, terrorism incidents or international crises tend to trigger short-term “spikes” in hate. However, the statistics give no information on crimes motivated by sectarianism.

The Bavarian Christian Social Union suffered heavy losses in the state election, as did the SPD, which was replaced as the second-largest party by the Greens. Who will form the next Government is not yet clear, but when someone does, what – if anything – will the new Government do about the law requiring the display of crosses in Government offices?

This week the Church of England announced that won gold for its entries in four different categories of the Digital Impact Awards, “the UK’s largest celebration of digital work in corporate communications”:

In addition, the C of E digital team was awarded ‘”digital in-house team of the year”: a decision made by judges and not open to entries. The Church was shortlisted alongside organisations such as Argos, Warner Brothers, Nationwide, Debenhams and British Heart Foundation. The full list of winners is here. Communicate Magazine commented:

“The Church of England has been recognised for its efforts over the past few years in building a digital function where once there was none. The church is now digitally savvy and explores new technologies – like Amazon’s Alexa voice assistant – with ease”.

Congratulations are due to the C of E digital team for its hard work in this area. Some readers may be aware that L&RUK is in the early stages of revamping its website; this was the topic of a short meeting at Nico’s on the Zattere, Dorsoduro, last Sunday. Readers will be reassured that the C of E website update has provided us with a number of pointers on how this may best be achieved.

On Thursday, the ECtHR will hand down judgment in ES v Austria (no. 38450/12), in which the applicant argues that her conviction for disparaging religious doctrines, after she made various controversial statements about Islam, violated her right to freedom of expression under Article 10 ECHR.

Brush up your Latin

This week, canon lawyer Ed Peters recommended the YouTube account LatinPerDiem, commenting “Canonists (and others) looking for a daily 3-4 minute dose of Latin, go here: These guys are terrific. And, no snarky comments about ‘classical pronunciation’, please. Really, terrific stuff.” With regard to pronunciation, however, it is perhaps the Director of Music who can justifiably insist on a uniform but not necessary “classically correct” pronunciation.

A serious candidate for the daftest comment on the judgment in Lee v Ashers Baking must be that in the Daily Mail Online, headlined Welby’s silence takes the cake:

“Many expected the Supreme Court ruling in the so-called ‘Ulster gay cake controversy’ to be welcomed by the Archbishop of Canterbury, Justin Welby, as it was a judgment in favour of freedom of religious expression. But not a word of reaction from Lambeth Palace…” 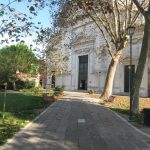 From Venice, an example of church and state power. In Campo San Pietro, a white stone marks the meeting place where the Doge did not have to walk unreceived right up to the threshold of the church, which was the city’s cathedral up until 1807 (St Mark’s was the doge’s private chapel); nor did the Patriarch have to go to meet him as he disembarked from his boat. The honour of both temporal and secular power was thus maintained.