Chancellor favours advice of Tower Captain over that of church architect

Whilst much attention is given to the safety issues surrounding the ringing of church bells, a recent consistory court judgment considered those aspects associated with access to the ringing chamber via a spiral staircase. This post considers these and other related matters raised in Re All Saints Rothbury [2018] ECC New 3. Different aspects of access to a new ringing platform were reported in an earlier post on Re St. Nicholas Codsall [2018] ECC Lic 1 in which different criteria were assessed by the court.

The petitioners sought a faculty for various works to the church roof and other parts of the fabric; the only contentious item was the location of a safety rope in the spiral staircase of the tower, a requirement of the church’s insurers. Following a visit by the Risk Management Surveyor of Ecclesiastical Insurance on 5 September 2017 and a subsequent report, a number of measures were “strongly recommended”, including [emphasis added]:

However, the church architect considered that a rope handrail should be placed on the outer radius of the staircase on the basis that running down the inside radius is an electrical conduit, and he was of the view that that should clearly not be used as a handrail as that would constitute an electrical risk “with far more serious consequences than any of the other items on the risk assessment!” [4].

The Public Notice attracted a letter of objection from the Tower Captain which “included a copy of a (separate) Risk Assessment drafted by two chartered engineer members of the bell ringers” (see comment below) [5]. The letter included the practical observation [emphasis added]:

“Whilst our Risk Assessment questions the need for any additional hand rail or similar we would have no objection (apart from the incurring of unnecessary cost) to the provision of a central grab rope which I know is standard practice in many towers with steeper and narrower steps than ours.

However the Church Warden tells me that the Architect prefers the idea of installing a handrail on the outer wall of the stairwell. On our spiral staircase this would restrict the tread width available forcing people onto the narrower central area of stair treads. This would inevitably increase the risk of falling”.

Following a site visit, the Chancellor stated that he was satisfied that the optimum positioning of a safety rope/rail would be down the central part of the staircase [9],

“It is of some significance that [the Tower Captain] represents the bell ringers, who I am told all support his objection, and who are the body of individuals who use the stairs most frequently and therefore may be better informed than the architect, who I understand has viewed the tower and steps, but clearly has not used the steps frequently”.

The report of Ecclesiastical Insurance suggested a rope fixed only at the top and bottom, and the Chancellor directed that the method of fixing the central rope rail is to be agreed with the DAC [10].

This judgment raises two issues on health and safety: the perceptions of those involved in the activity on a regular basis; and the qualifications of those providing advice in this area, and the relevance of risk assessments. On the former, the letter from the Tower Captain questioned the need for any handrail, suggesting the oft-heard sentiment “we’ve always done it this way, and there have been no problems”, see Health & Safety and the PCC. However, to their credit, the bellringers did not object to additional safety measures.

More questionable was the statement that the bellringers’ Risk Assessment had been drafted by “two chartered engineer members of the bell ringers”. As we noted in Consistory court evidence or “Call My Bluff”: Episode 2, a document submitted by the PCC to the court in Re St Leonard, Watlington [2016] [on “replacement rain goods”], had been produced by a member who was a Chartered Engineer. Although the court accepted that the PCC member in question had a “professional, scientific background”, it was unable to attach a great deal of weight to his evidence since he did not say that this particular subject was within his area of expertise; the qualification CEng is granted to those with expertise in a wide range of engineering disciplines – in David’s case, chemical metallurgy.

Likewise, in the instant case there is nothing to suggest that the court took into account the professional qualifications of two members of the band of ringers: furthermore, the practical issues they raised (on the implications of placing a handrail on the outer wall) were not enhanced by this apparent “bigging-up” of the band’s expertise; these issues would also have been evident to anyone proffering advice on the issue. The ringers’ risk assessment would have carried more weight had it been accompanied by members’ expertise in the field of health and safety, such as the qualifications granted by the Institution of Occupational Safety and Health (IOSH).

With regard to “risk assessments”, although professional bodies such as IOSH produce standards with regard to their conduct and content, the approach of the Health and Safety Executive is less prescriptive. The HSE states “[y]ou do not necessarily need specific training or qualifications to carry out a risk assessment”, although it notes “[a]s an employer, however, you must appoint someone competent to help you meet your health and safety duties. A competent person is someone with the necessary skills, knowledge and experience to manage health and safety”.

A final note on expertise came from Chancellor Euan Duff, who said:

“I do not profess any expertise or particular knowledge of the optimum method of fixing, but my instinct is that there ought to be fixings at intervals down the staircase as well as at the top and bottom. I direct that the method of fixing the central rope rail is to be agreed with the DAC, who will have the benefit of the advice of the members who have expertise in this area“.

In general, church buildings are considered to be low risk health and safety environments, and in addition to the potential for serious injury, falls from height can result in claims for damages. It is therefore important that thorough risk assessments are undertaken by someone with appropriate qualifications and expertise. Re All Saints Rothbury demonstrates the sometimes conflicting opinions which need to be taken into consideration by a Chancellor. 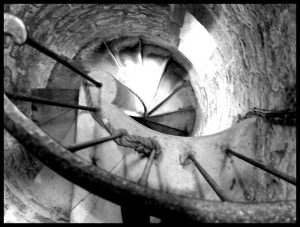 3 thoughts on “Conflict of safety advice on bell tower access”