Review of the ecclesiastical court judgments during  November 2018,

This month, only four judgments have been reported, plus two applications for environmental permits. The latter are considered under “Churchyards and Burials” as they concern the discharges of effluent to churchyards. Also included in this post is a link to decisions of the Cathedrals Fabric Commission.

This summary also includes links to other posts relating to ecclesiastical law.

Re All Saints Rothbury [2018] ECC New 3 The petition proposed various works to the church roof and other parts of the fabric. The only contentious item was the proposal to fix a safety rope in the spiral staircase of the tower. The church architect proposed a rope running down the outer radius of the staircase, because there was an electrical cable conduit running down the inner radius. The objector, on behalf of local bell ringers, objected to an outer rope, which would tend to make users walk towards the narrower part of the very narrow staircase. The Chancellor granted a faculty for a safety rope running down the inner radius, with fixing points at intervals, which would not force users towards the narrow part of the treads and would mean it would be less likely that people might grab the electrical conduit for support. [Re All Saints Rothbury [2018] ECC New 3] Link to post] [Back] [Top]

Re Cheshunt Cemetery (No.2) [2018] EACC 4 The Dean of Arches granted leave to appeal against the decision of the Deputy Chancellor in Re Cheshunt Cemetery (No. 2) [2018] ECC StA 2 not to allow the exhumation of the cremated remains of the petitioners’ baby son. Leave was granted on two grounds: (a) the Deputy Chancellor was wrong … to categorise the Appellants’ case as “one of change of mind rather than a (potentially operative) type of mistake … namely a lack of understanding as to the significance of interment in consecrated ground”; and (b) the Deputy Chancellor thereby failed to consider whether this mistake was capable of constituting exceptional circumstances within the law as laid down in Re Blagdon Cemetery [2002] Fam. 299 and/or to explain why this was not so. [Re Cheshunt Cemetery (No.2) [2018] EACC 4] [Back] [Top]

Re St. Nicholas Guisborough [2018] ECC Yor 6 The petitioners sought to retain permanently a Hauptwerk digital organ (at the time owned by Wakefield Cathedral), which was introduced into the church under an Archdeacon’s Licence for temporary minor re-ordering. An extant faculty of December 2017 authorized the removal and disposal of the pipe organ, conditional on there being a suitable replacement option. The current pipe organ (Harrison and Harrison, 1876; rebuilt Laycock and Bannister, 1982) “…was a poor instrument (too loud in the chancel and unintelligible in the nave) and the Organ Adviser was of the opinion that it was not worth preserving” [6].

The petitioners reached their decision after investigating various options – purchase of a new pipe organ, refurbishment of the present instrument, (two verbal quotations, each >£100k), and obtaining a redundant organ from elsewhere. On the advice they were given as to the potential costs, they considered none of these to be a financially non-viable option.

The poorly-coordinated communications between the diocesan organ advisor, the DAC, the petitioners and the supplier of the digital organ is clearly evident from paras [11] to [23]. The Chancellor’s starting point in considering this petition was that the DAC advised that the current organ is not fit for purpose and should be replaced [24] – the substance of the earlier petition – and the issue for him to decide on the basis of all the information was whether the Hauptwerk organ was a suitable replacement or not [25]; a negative answer would prompt the secondary question of whether the petitioners have made out a case for keeping the Hauptwerk organ on a permanent basis. If only a pipe organ will do, then there is no need to consider the adequacy of the Hauptwerk.

Although Canon B20 addresses “the musicians and music of the Church”, there is no canonical requirement either that there be an organ in each church or more particularly that there be a pipe organ [26]. The Chancellor noted that Re St Nicholas, Warwick [2010] Coventry Const. Ct, Eyre Ch.  [Summary: Ecclesiastical Law Journal, (2010) 12(3), 407-408] considered circumstances not dissimilar to those at Guisborough [33]. This indicated that Newsom reported that there were only two relevant cases reported in the period 1950s and 1993: Re St Mary’s Lancaster 1980 1W.L.R. 657; and Re St Martin’s Ashton-upon-Mersey [1981] 1 W.L.R. 1288.

The starting point in the instant case was that the current organ is not fit for purpose; the organ advisor had reported “selling the extant pipe organ en bloc is simply not a realistic prospect. Extension organs are not wanted, especially ones with the problems outlined above. Its scrap value would be the best it could command” [36]. Although there is no principle of law requiring like-for-like replacement, there is a presumption that the starting point should be to replace a pipe-organ with a pipe-organ, but that this is a presumption that can be rebutted [37].

Having assessed the various considerations, [39 to 45], the Chancellor was satisfied that the petitioners had discharged the burden on them of displacing the presumption that the Harrison and Harrison organ should be replaced with a pipe-organ, and their proposal was in all the circumstances a reasonable one in terms of their wishes, needs and resources [46]. However, he gave directions in relation to two outstanding issues: the acoustic and to balancing the sound [48]; and the related matter of the positioning of the speakers and of the positioning of the console [49]. On these he said [50]:

Re St. John-in-Bedwardine Worcester [2018] ECC Wor 3 The petition related to the disposal of an upright piano, which was beyond repair and the installation of a grand piano, which was a gift from a local arts charity. The installation of the grand piano had already been authorised by an Archdeacon’s temporary licence and the petition sought approval for the installation to remain permanent. There were two objectors, who did not become parties opponent. The Diocesan Advisory Committee approved the proposals and all but one member of the Parochial Church Council (one of the objectors) voted in favour. The Chancellor granted a faculty. [judgment t.b.a.] [Back] [Top] 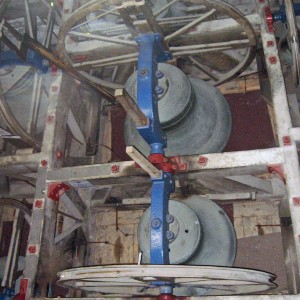 See Re All Saints Rothbury [2018] ECC New 3 above, re: access to ringing chamber.

The last Commission meeting was on 25 October 2018; it did not consider any new applications. The next  meeting is on 13 December 2018 when the following new applications will be considered.

As explained in our index of 2018 judgments, copies of the above judgments are now available via the web site of the Ecclesiastical Law Association.

The photographs used in this post do not necessarily relate to the cases discussed.