And as the lights on the Christmas tree shine out over New Palace Yard, it’s beginning to look a lot like…  Advent Sunday

On Tuesday, the Supreme Court refused Mr Noel Conway’s application for permission to appeal against the dismissal of his appeal from the decision of the Divisional Court refusing his application for a declaration that the ban on assisting suicide in s.2(1) of the Suicide Act 1961 is incompatible with his rights under Article 8 ECHR.

“Not without some reluctance”, the panel concluded that Mr Conway’s prospects of success were not sufficient to justify giving permission to appeal.

In our report of the Peter Ball inquiry, we noted that the need for mandatory reporting of suspected abuse was a theme common to all IICSA hearings. It is strongly felt by survivors’ groups and others that legislation should be introduced which would subject organisations such as the Churches to controls and associated sanctions. However, in view of the Government’s response on 5 March 2018 to the 2016 consultation, we doubted whether the Government itself was likely to introduce such legislation in the short term. This was confirmed at Prime Minister’s Questions on 28 November, when in response to a question from Tracy Brabin (Batley and Spen) (Lab/Co-op) on whether she would commit to protect children and introduce mandatory reporting across all institutions, including the Church of England, the Prime Minister said this:

“The hon. Lady raised the issue of mandatory reporting, which we looked at very carefully when I was Home Secretary. There is actually mixed evidence on the impact of mandatory reporting. In fact, there is some evidence that it can lead to the genuine cases not being given the resources they require. I want the hon. Lady to be in no doubt about the seriousness with which I and this Government take the issue. We are doing our best to repair—I will not claim that we can fully repair—by giving some sense of justice to the people who suffered at the hands of too many institutions, including institutions of the state, for too long.”

On not disestablishing the Church of England

On Wednesday in the House of Lords, Lord Berkeley asked Her Majesty’s Government “what assessment they have made of the case for the disestablishment of the Church of England.”

To which Lord Young of Cookham (Con) replied on behalf of HMG, “My Lords, none”.

On Tuesday, the President of Ireland signed into law the Thirty-seventh Amendment of the Constitution (Repeal of offence of publication or utterance of blasphemous matter) Bill 2018.

The European Commission has published a guidance note for national authorities on the Framework Decision 2008/913/JHA on combating racism and xenophobia. The intention is to improve implementation at the national level of EU rules on fighting hate crime and hate speech. The guidance gives advice on how to address common practical issues in the application of the rules and how to ensure the effective investigation, prosecution and sentencing of hate crime and hate speech.

It appears that the Italian Minister of Education, Marco Bussetti, is supporting a move to make the display of crucifixes compulsory in Italian schools. A bill to that effect has been introduced in the Chamber of Deputies and, according to a report in Corriere della Sera, he believes that the crucifix is “the symbol of our Christianity and our Catholic religion”.

We’ve been here before: Lautsi and Others v Italy [2011] ECHR 2412, in which the Grand Chamber reversed the earlier Chamber judgment and held that the display of crucifixes in Italian classrooms did not violate Article 2 of Protocol No. 1 ECHR (education) and that no separate issue arose under Article 9. The Swiss judge, Malinverni, pointed out  in his dissent that “the presence of crucifixes in Italian State schools has an extremely weak basis in law: a very old royal decree dating back to 1860, then a fascist circular of 1922, and then royal decrees of 1924 and 1928 … which, as they were not enacted by Parliament, are lacking in any democratic legitimacy”. Presumably, the proposed legislation is an attempt to repair that deficit.

On 26 November, ChurchCare tweeted “We are in the Diocese of Chichester @ChichesterDio today at their DAC office, which is next to the wonderful St Leonard’s church, as we welcome the diocese to our Online Faculty System, becoming the 35th diocese who now use our Online system for List B and Faculty applications”. Subsequently, the online system was rolled out in the Hereford Diocese. The Dioceses signed up to the Online Faculty System are listed here.

In Re The Venerable Bede, Wyther [2018] ECC Lee 3, Mark Hill QC commented “the chancellor can be contacted via the registry 24 hours a day, 365 days a year, and can generally give a response on urgent matters within hours”. In welcoming the new arrangements, he expanded on these comments stating that a diocesan chancellor could now to transact the business of the consistory court from anywhere in the world.

European Courts is part of the Rechtspraak Europa website, founded by Marc de Werd, Professor of the Administration of Justice at the University of Amsterdam and a senior judge at the Netherlands’ Administrative High Court, and edited by Joanne Bik. Much of Rechtspraak Europa is in Dutch; however, the European Courts strand is available in English and includes links to ECtHR and CJEU press releases (which we sometimes miss) and a monthly overview of the case law of the ECtHR and the CJEU. The latest overview is here. The monthly overview is classified by subject and is an extremely useful source of current case-law for anyone interested in European law, whether generally or on law and religion in particular. 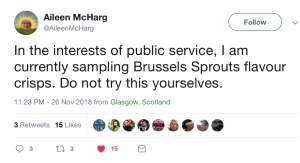 “St Luke’s Church in Hackney has developed a reputation for doing things a little differently — this year, for example, its Christmas carol service will take place in a brewery.”

Hope they’ve got someone who can organise a…