We began last year’s post with “Inevitably, much of 2017 was dominated by the General Election and by Brexit”. Apart from the absence of a General Election, 2018 has been more of the same. By the end of the year, during which we had covered various challenges in the courts, we ran with a strapline Brexit, Brexit and more Brexit, but commented ““Brexit” as understood on 29 March 2017 certainly does not mean “Brexit” as understood on 3 December 2018 and may probably mean something different by 29 March 2019”.

The UK is due to leave the EU on 29 March 2019, whether there is a deal with the EU or not. Stopping Brexit would require a change in the law in the UK and the European Court of Justice ruled on 10 December 2018 that the UK could cancel the Article 50 Brexit process without the permission of the other 27 EU members and remain a member of the EU on its existing terms, provided the decision followed a “democratic process”…

Readership statistics indicate that issues associated with Brexit are not a major reason for accessing the blog, even as the deadline approaches. However, in view of its overarching importance, we will continue to cover the relevant legal issues – but we aim to leave the political analysis to others better qualified than we are.

In May, the Government Equalities Office issued Dress codes and sex discrimination – what you need to know. On religious dress, it is briskly dismissive of the obsessive approach taken by some employers in the past:

“Britain is an integrated and cohesive society with a proud tradition of religious tolerance within the law. Employers should be flexible and not set dress codes which prohibit religious symbols that do not interfere with an employee’s work. New Acas guidance on Religion or Belief can be found at this link.”

A preliminary hearing in the investigation into the extent of any institutional failures to protect children from sexual abuse within the Anglican Church (as defined by the IIICSA) was held on Wednesday 4 October 2017; the hearings into child sexual abuse in the Roman Catholic Church were held over 14 days in November and December in that year. These hearings continued into 2018 and beyond.

On 1 March 2018, the IICSA published its report Child Migration Programmes which criticises Government for the policy of child migration and recommends that all child migrants are financially compensated by HMG through a redress scheme. The involvement of the Church of England was through its Advisory Council for Empire Settlement (CEACES) which is described in our post, IICSA, child migration, and the CofE.

However, there was greater criticism for its approach to safeguarding within the Chichester Diocese, for which the public hearing was 5-23 March 2018, and in relation to Bishop Peter Ball, 23-27 July 2018. The former concluded with evidence from The Most Revd Justin Welby, Archbishop of Canterbury, and the Rt Rev Peter Hancock, Bishop of Bath and Wells, and the Church’s lead bishop on safeguarding, 21 March; also of importance was that of The Revd Canon Dr Rupert Bursell QC in which a number of legal views were explored.

We covered three aspects of the Peter Ball hearing: Part I considered the issues surrounding the appointment of Peter Ball as a diocesan bishop, and his subsequent Permission to Officiate (PTO); Part II looked at: the issue of a police caution and its implications; the sanctions applicable to bishops; misconduct in public office; and mandatory reporting; and Part III, the legislation, then and now. Space does not permit an analysis of the hearings, or the subsequent progress within the Church of England, both of which are perhaps best left until after the formal IICSA report has been issued. Nevertheless, there remain a number of outstanding issues: the abuse conducted by the late John Smyth QC; the allegations against Bishop George Bell; mandatory reporting and the seal of the confessional; as well as the present position of Lord Carey in the diocese of Oxford.

Prior to going to press with this round-up, the Church of England published new House of Bishops’ guidance on reporting safeguarding and other Serious Incidents to the Charity Commission. This guidance has been approved by  the Charity Commission approved guidance; as part of the move, for the first time the Church will begin compiling national safeguarding statistics.

2018 marked the end (almost) of a long struggle by Rebecca Steinfeld and Charles Keidan to be allowed to enter a civil partnership. In R (Steinfeld and Keidan) v Secretary of State for International Development [2018] UKSC 32, the Supreme Court issued a declaration that sections 1 and 3 of the Civil Partnership Act (to the extent that they preclude a different sex couple from entering into a civil partnership) are incompatible with Article 14 ECHR taken in conjunction with Article 8 [62]. The Prime Minister announced that the Government would bring forward the necessary legislation to amend the Act in respect of England and Wales. The Scottish Government, however, held a consultation on whether to extend civil partnerships to opposite sex couples or to close civil partnerships altogether in future.

Humanist weddings – or, more accurately, their absence – remain an issue in England and Wales. There are now more humanist weddings in Scotland each year than religious ones, and the judgment of the Northern Ireland Court of Appeal in Smyth, Re Judicial Review[2018] NICA 25 means that humanist weddings are now permissible in that jurisdiction without the necessity of further legislation.

England & Wales remains the exception, and it may be that the Government will decide to wait for the recommendations of the forthcoming Law Commission review of wedding law before deciding whether or not to follow Scotland and Northern Ireland. But the refusal of successive Westminster Governments to make provision for humanist ceremonies is looking increasingly anomalous.

Under the terms of the Lords Spiritual (Women) Act 2015, until 2025 if any woman is appointed to be a diocesan bishop, she will automatically join the House of Lords when the next vacancy occurs on the Bench (or straight away if it is to one of the five ex officio sees). On Tuesday 23 October, the Rt Revd Vivienne Faull, Bishop of Bristol, was introduced to the House of Lords to become the fourth woman bishop in the Lords Spiritual. She joins the Rt Revd and Rt Hon Sarah Mullally DBE, Bishop of London, the Rt Revd Rachel Treweek, Bishop of Gloucester and the Rt Revd Christine Hardman, Bishop of Newcastle.

On 18 December, the nomination was announced of The Right Revd Elizabeth (Libby) Jane Holden Lane, Suffragan Bishop of Stockport, for election as Bishop of Derby in succession to The Right Revd Alastair Redfern. Bishop Libby was the first woman to become a bishop following the 2015 Act. Depending on the date of her election to Derby and subsequent installation, it is likely that she will soon her seat in the Lords; the Bishop of Norwich will retire on 28 February 2019 and the see will be vacant from 1 March.

The Church of England now has sixteen women bishops of whom four are currently diocesans, i.e. excluding Libby Lane. Two further suffragan bishops are due to be consecrated in February 2019.

The end of the year is a good time to review readership statistics and find what issues have been of greatest interest. WordPress helpfully analyses “page read” on the basis of five time-frames – 7 days, 30 days, quarter, year and “all time” (i.e. since mid-2012) – and these provide a quantitative view of how the blog is perceived and used by its readers. Significantly, the “top ten” of the page reads over the short term are quite different from the longer-term interests. The former tend to reflect issues relating to current developments in law and religion, whilst the latter comprise issues of broader, but recurring interest. Given the popularity of The Revd Fergus Butler-Gallie’s “A Field Guide to the English Clergy”, might there be scope for a guide to the “curious quips,… cranks and contradictions queer” which we come across in our posts and readers’ searches? [Not that we have plans for such a publication!]

On 25 February we reported that we had had our millionth page-view, which was rather sooner than we expected – and a prospect that we could hardly have contemplated when we started this enterprise in June 2012. So it was equally surprising when on 4 December we discovered that we had exceeded 1,250,000 page reads. While this is not 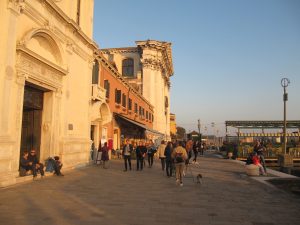 really a major milestone in the development of the blog, we do seem to have reached this point quite soon after passing the million mark earlier in the year.

An unexpected highlight of the year was a meeting at  Nico’s Gelateria, Venice, (of all the unlikely places) to discuss the state of the blog and future developments of the L&RUK site. Unusually, this was shortly followed by a second face-to-face meeting, this time at the Temple Church in London, where Professor Diarmaid MacCulloch delivered the 2018 Lyndwood Lecture on Richard Hooker (1554 – 1600): Invention and Re-invention.

With regard to the operation rather than the content of the site, following the problems of the Ecclesiastical Law Association website, we are now holding all new consistory court judgments on our site and, where appropriate to the context of a post, adding earlier judgments. The annual summary of 2018 judgments and the monthly reviews of this year’s judgments have now been modified to remove “dead links” to the former ELA website, and we will gradually remove those in the posts from earlier years.

Another recent “behind the scenes” activity was when WordPress decided to introduce its new Gutenberg editor software, although this was quickly resolved with a plugin which restored the “Classical Editor”, which is more amenable to the on-line manner in which we now tend to write our blog posts.

Judgments are expected in two Northern Irish cases on which appeals were heard in 2018:

And might Lee v Ashers Baking Company Ltd & Ors (Northern Ireland) [2018] UKSC 49 go to the European Court of Human Rights, given that the Supreme Court reversed all the earlier judgments of the Northern Ireland courts?

And a happy New Year from both of us…