Foot-in-mouth by the Mail Online, exhumation of an alleged abuser, the next round of Masterpiece Cakeshop: just another week…

Following an adverse ruling from the Independent Press Standards Organisation, on 7 January the Mail Online published a correction to its earlier report of the judgment in Akhter v Khan [2018] EWFC 54. An article on 3 August last year asserted that “a UK court had said that the couple’s marriage was ‘valid and recognised’” and that “before the landmark decision, the courts did not recognise [a nikah ceremony] as a valid marriage”. In reality, the Court had said no such thing, as is evident from our report of the judgment here.

Exhumation of an alleged abuser

The Times (£) and The Telegraph carried reports that Stephen Eyre Ch had – exceptionally – granted a faculty in the Lichfield consistory court to exhume from a family grave of the ashes of a man accused by his step-granddaughter of childhood sexual abuse: see Re The Cremated Remains of AA [2018] ECC Lic 7. Though no criminal proceedings were ever brought against the man and the Chancellor could not confirm the accuracy of the allegations, he believed that they had been made in “good faith” and were “accepted as truthful” by her parents. He granted an application by the wife’s sister for the ashes to be exhumed and moved to the grave of the man’s parents in another churchyard. We reviewed the judgment in Re The Cremated Remains of AA, here.

Although the media reports highlighted the exhumation of the remains of the alleged paedophile, the judgment turned on the distress caused to the parties concerned and not directly on the allegations of paedophilia per se; whilst they were the source of distress, the Chancellor stressed [17]: “I must be conscious that the allegations against AA although put forward in good faith and genuinely believed by CC and her family are not accepted by AA’s children”. The issue of distress or conflict differs from the “exceptional circumstances” under which exhumation may be granted in that it is more difficult to evince guidance from Re Blagdon or from Bishop Hill’s note; nevertheless, it has been necessary for the consistory courts to consider such circumstances on a number of occasions. These will be considered in a future post.

Although not making the national prominence of the AA judgment, above, other notable consistory court judgments have been reported this week, including: a reminder to incumbent and congregation that they are temporary custodians only of church buildings and assets; a robust emphasis of the duties of incumbents vis-à-vis diocesan Churchyard Regulations, and the potential implications of “culpable neglect”; and the vexed question of Alpha SB2M vs Theo vs Howe 40/4 chairs in the context of a church within the HTB network. These recent judgments and others will be reviewed in our January round-up of cases.

The US Supreme Court ruled in Masterpiece Cakeshop Ltd et al v Colorado Civil Rights Commission et al 584 US__(2018) 3 that Jack Phillips, the owner of Masterpiece Cakeshop, had been wrongly prosecuted for declining to bake a cake marking a same-sex wedding ceremony on the grounds that to do so would violate his religious beliefs. He has since filed a motion in the US District Court for Colorado seeking a preliminary injunction against the Colorado Civil Rights Commission, claiming that the state of Colorado was again wrongly pursuing him: this time for declining to bake a cake celebrating the seventh anniversary of a male-to-female gender transition. While the Commission has tried to argue that the federal courts should dismiss the motion, a US District Court has now ruled that the action may proceed.

And there is still an outstanding petition for certiorari in the US Supreme Court in Klein v Oregon Bureau of Labor and Industries: another refusal to design and create a wedding cake for a same sex wedding. Coming at some point, no doubt, to a cake-stand near you…

The Scottish Government has launched a consultation on Scots charity law. The consultation document notes that it has been seventeen years since the Scottish Charity Law Review Commission proposed establishing the Scottish Charity Regulator (OSCR) and more than thirteen since the passage of the Charities and Trustee Investment (Scotland) Act 2005. Given that Scottish charities are now operating in a rather different environment, it feels that the time is right to check how well the current arrangements are working and to explore potential improvements.

The consultation seeks views on potential amendments to the statutory charity regulation framework in Scotland, in light of proposals put forward by OSCR. The proposals broadly focus on changes which, it is hoped, will increase transparency and accountability in order to maintain public trust and confidence in charities and OSCR – principally by broadening OSCR’s powers and extending the disqualification criteria for charity trustees by bringing them into line with the criteria in England and Wales. The consultation closes on 1 April.

On 7 January, the Church of England announced that the Appointments Committee had appointed Dame Sarah Asplin to succeed Sir Andrew McFarlane as Chair of the Clergy Discipline Commission with effect from 1 January 2019. Dame Sarah Asplin is a Lady Justice of Appeal. Sir Mark Hedley is to continue in his role of Deputy Chair. The Chair and Deputy Chair of the Commission also serve respectively as President and Deputy President of Tribunals.

Constituted under section 3 of the Clergy Discipline Measure 2003, the Clergy Discipline Commission oversees the disciplinary system in respect of clergy of the Church of England; its principal functions are to issue codes of practice and general policy guidance to those who exercise clergy discipline functions and to give general advice to disciplinary tribunals, bishops and archbishops as to the penalties which are appropriate in particular circumstances.

The President of Tribunals, and in her place the Deputy President, exercise certain judicial functions in the course of disciplinary proceedings, including: determining applications for permission to make a complaint out of time; reviewing decisions by bishops to dismiss complaints; hearing appeals by clergy against suspension; and deciding when a complaint should be referred to a disciplinary tribunal for a full hearing.

On 10 January, the Church of England issued a Statement on Pastoral Guidance for use in conjunction with the Affirmation of Baptismal Faith in the context of gender transition. During its regular December meeting, the House of Bishops published new guidance on how an existing rite, for the Affirmation of Baptismal Faith, could be used to enable transgender adults to mark their transition. This was a direct response to a vote of the General Synod in 2017 calling for transgender people to be welcomed and affirmed in the Church and requesting the House of Bishops to consider whether nationally commended liturgical materials might be prepared to mark a person’s gender transition.

The guidance now commended by the House of Bishops seeks to fulfil that remit. The House decided that no special or new liturgy should be prepared for this purpose: Instead, it has decided that existing liturgy may be used and has provided guidance for clergy on how they could use it in this context should they wish to do so.

In our post, Seven Bishops and a PCC: St George’s, Headstone, we noted the report of the Independent Reviewer on the dispute over episcopal oversight for the church, in which Sir William Fittall concluded that the PCC’s complaints were without justification.

The PCC has now returned to the fray with Subverting Diversity: An open letter to the Archbishops of Canterbury and York. As we said in our original post, the events surrounding the grievance “will probably be incomprehensible to most non-Anglicans as well as to many within the Church of England”. So no change there, then.

In the House of Commons, the Second Church Estates Commissioner answered questions from Adam Holloway (Gravesham, Con) on: the appointment of head choristers in cathedrals and abbeys (205856); and the duty of the Church of England and cathedrals and abbeys to cathedral choristers with long-term medical conditions under disability discrimination legislation (205855). On the former, Dame Caroline Spelman gave information on the arrangement at Rochester Cathedral, the cathedral nearest to the Hon. Member’s constituency. With regard to disability legislation, she stated:

“As the Act does not override other legislation, such as listed building or planning legislation, the Church of England’s Cathedral and Church Buildings Division has produced a guidance note for cathedrals which specifically addresses this issue.

The Patriarch of Moscow and All Russia, Kirill I, has warned that the “world wide web of gadgets” represents “an opportunity to gain global control over mankind” and “Such control from one place forebodes the coming of the Antichrist.” One can just about see his general point about data security – but the Antichrist?? 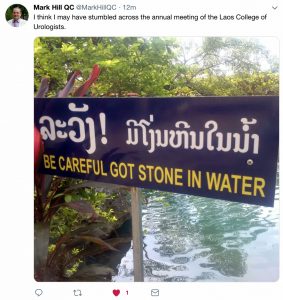