IICSA and the Benedictines, male clergy, some anoraky Anglican stuff (and some equally anoraky bell stuff) – and an unlikely bit of media coverage…

This week, the Independent Inquiry into Child Sexual Abuse (IICSA) has been holding public hearings into allegations about the sexual abuse and exploitation of children at Ealing Abbey and St Benedict’s School, which forms part of the English Benedictine Congregation (“EBC”) case-study of the Roman Catholic Church investigation. Abbeys and schools related to the EBC have been the subject of numerous allegations of child sexual abuse and this hearing examined how Ealing Abbey, St Benedict’s School and other institutions, such as the police and the Crown Prosecution Service, responded to such allegations.

The issue was raised again on Thursday by Ms Karmy-Jones who explained that the information, provided on 6 February 2019 by Fr Christopher Thomas, General Secretary of the Catholic Bishops’ Conference of England and Wales, does not cover all of the topics covered by the Inquiry’s request to the Nuncio; there is, therefore, still a need for the Apostolic Nuncio to respond to the inquiry’s request [Day 4, pages 180/16 to 181/5].

The Inquiry has taken a number of steps in order to obtain this evidence from the Apostolic Nuncio and at each stage it has adopted the approach that it has been advised to take. Ms Karmy-Jones stated:

“The inquiry has taken a number of steps in order to obtain this evidence from the Apostolic Nuncio and at each stage it has adopted the approach that it has been advised to take. [Day 4, page182/15]. [These approaches are detailed I the transcript, pages 182/16 to 183/16].

“The inquiry is disappointed that, despite the fact the Apostolic Nuncio clearly received the inquiry’s request in early December, so far no statement has been provided and it remains unclear whether the Nuncio or Holy See will accede to the inquiry’s request for a statement to assist with its investigation. In any event, it is clear that, even if a statement is provided today [7 February], it will come too late for us to use it in this particular hearing. [Day 4, page184/1 to 184/9].

On Day 5 of the hearing, Dom Christopher Jamison, Abbot President of the EBC, told the Inquiry:

“This morning I received a letter from Abbot Martin Shipperlee offering me his resignation with immediate effect as Abbot of Ealing. Now, I have been present for the Ealing hearings, as I was for the previous EBC hearings, and I was particularly listening to Abbot Martin’s own evidence, and towards the end, he said, ‘My administration of safeguarding, as has been serially revealed, is of an insufficient standard’. So, in the light of what I heard during the hearing, and in the light of his own self-assessment, I have accepted his resignation.”

The issue of male-only priests has reappeared in relation to the advertisement for an interim incumbent for a 3-year period for the benefice of King’s Sutton with Newbottle and Charlton, which lies on the Oxfordshire-Northamptonshire border and is within the Peterborough diocese. As with St Barnabas, Oxford, on which we posted Oxford job ad creates stir, these parishes are operating within the present ecclesiastical law under the House of Bishops Declaration on women bishops.

Today in the Canton of Geneva, there will be a vote on whether or not to back a cantonal law aimed at the better regulation of relations between religion and the state and reaffirming the principle of secularism in the canton: the Loi sur la laïcité de l’Etat (11764), du 26 avril 2018: see pp 37ff of the explanatory document, here. The law includes a ban on visible religious symbols which, say opponents, targets Muslim women. The new legislation was approved by the Grand Conseil in April; however, opponents collected some 8,000 signatures to force a cantonal referendum on the issue. Two legal appeals are also pending.

This week we posted two pieces, Avoidance of simony and income tax and GDPR and the Church Electoral Roll – Update; a common feature was that a previously identified potential problem had been re-evaluated and is not longer considered to be so. For most non-stipendiary priests and PCCs it will be immaterial to know that their T&C cannot be regarded as simoniacal, or for GDPR, reliance may be placed upon Article 9(2)(e) and not Article 9(2)(d) of the Regulations. Nevertheless, the CofE considered it necessary to investigate these potential threats within the law, and likewise we felt it would be useful to pass on this new legal advice.

Another area of ecclesiastical law, the binding nature, or otherwise, of the appellate cases Re Christ Church, Alsager and Re Blagdon Cemetery has been an on-going issue for chancellors and has provided a fruitful source of material for commentators. In Re Middlewich Cemetery [2019] ECC Chr 1, which was circulated this week, HHJ David Turner QC helpfully summarized the future situation as follows:

“[54]. Subsection (1) of clause 7 of the Church of England (Miscellaneous Provisions) Measure 2018 will, in any event, from 1st March 2019, amend the Ecclesiastical Jurisdiction and Care of Churches Measure 2018 by inserting a new section 14A which will have the effect of treating decisions of the appellate courts as if they decisions taken by each other. Subsection (3) applies the new section 14A to decisions of the appeal courts that were made before that section comes into force (as well as to those which are made after that)”.

Finally, those who read the Report of the Revision Committee on the Draft Church of England (Miscellaneous Provisions) (No 2) Measure GS 2104Y/2105Y will note the discussions relating to Clause 5 (now clause 6): Disused burial grounds in cathedrals: approval for building etc. Schedule Amendments to the Care of Cathedrals Rules 2006. The Committee noted that clause 5(5) employed the concept of a “relative” of a person whose remains have been interred in land on which it is proposed to build. However,

“[22]. … ‘Relative’ was not defined. This was consistent with the approach that was taken when section 4 of the Care of Churches and Ecclesiastical Jurisdiction (Amendment) Measure inserted a new section 18A into the Care of Churches Measure 1991 so that building on disused parochial burial grounds could be authorised by faculty”.

In assessing Re Christ Church Spitalfields [2019] EACC 1 the court considered whether the application by a distant relative to intervene should be refused given the different degrees of restriction imposed by relevant legislation [65 to 68]. The Revision Committee resolved to remove this lacuna and “agreed that clause 5 should be amended to adopt the definition of “relative” [in the 1981 Act]” for the purposes of the Care of Cathedrals Measure 2011, sections 44 and 63 of the Mission and Pastoral Measure 2011 and the Ecclesiastical Jurisdiction and Care of Churches Measure 2018. See what are now subsections (5), (9), (10) and (11) of clause 6″, i.e.

“‘relative’ means in relation to any person whose remains are interred, a spouse or civil partner, parent or grand-parent, or child or grandchild, including a legitimated child, and any person who is, or is the child of, a brother, sister, uncle or aunt”.

Whilst Re Christ Church Spitalfields turn on the definition of “relative”, the objection of the intervener was an important factor in this case which determined that a £1.477M nursery school completed in October 2013 should be demolished at an estimated cost of £93,000; prior to the latest Arches Court hearing, the case had accrued £750,000 in legal costs.

The latest issue of Law & Justice has been published. Articles include:

Prayers in the House of Commons

In an earlier weekly round-up, we reported that on 11 January, Crispin Blunt had tabled an Early Day Motion in the Commons stating “religious worship should not play any part in the formal business of the House of Commons” and calling on the Procedure Committee to consider alternative arrangements. This EDM has 15 signatures, including the 6 supporters. By way of contrast, Parliamentary e-Petition 2374 to “keep daily prayers in House of Commons, as UK was built on Christian values” was set up at the end of January, and at the time of writing had attracted 20,668 signatures. 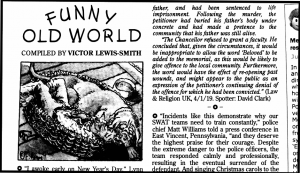 Yesterday, we received a Google query “catholic church bells in uk”. Answer: it’s nothing to do with law and we’ve no idea – but Dove’s Guide for Church Bell Ringers certainly has. A quick search on Dove revealed the following for Great Britain – excluding towers with fewer than six bells and towers where the bells are unringable (tenor weights are in cwts-quarters-pounds):