As one Twitter commentator said: “Preachers: Please don’t turn your Holy Week and Easter sermons into glorified travelogues. Yes, you’ve been to #NotreDame. Yes, it’s inspired you. But this week isn’t about you.” Likewise for blogs on law and religion.

In Guimon v France [2019] ECHR 291 [in French: there is a press notice in English here], Ms Guimon, an active member of the Basque separatist organisation ETA until her arrest in 2003, had been sentenced to 17 years’ imprisonment for conspiring to plan an act of terrorism, handling assets obtained by racketeering and unlawful possession and transport of weapons and explosives in connection with terrorism. On 21 January 2014, her lawyer asked that she be granted leave under escort to pay her last respects to her father, who had died that day in a Bayonne hospital.

The Vice-President of the Paris tribunal de grande instance responsible for the execution of sentences rejected the application, ruling that, though a death in the family could constitute grounds for granting leave under escort, her request had to be assessed in the light of her personality and the risk of escape. Her subsequent appeals were dismissed.

The ECtHR found that there had been no violation of Article 8 (Respect for private and family life). The Convention did not guarantee a right to parole and, given the risks of escape and public disorder inherent in granting temporary leave to a convicted prisoner with or without an escort, the possible grounds for refusing Ms Guimon’s request had been sufficiently foreseeable. The domestic courts had examined her request carefully and, while conceding that her father’s death was an exceptional ground which could justify escorted leave, had refused her request on account of her criminal profile and because it was impossible to organise a reinforced security escort within the time available. The courts had carried out a proper balancing exercise between Ms Guimon’s right to respect for her family life and the interests of public safety. The State had not exceeded its margin of appreciation and, in the circumstances, the refusal had pursued legitimate aims and had not been disproportionate. So there had been no violation of Article 8.

In October 2018, we noted the judgment in WM Morrison Supermarkets Plc v Various Claimants [2018] EWCA Civ 2339, in which the supermarket chain lost its appeal against a High Court judgment that it was vicariously liable for the criminal acts of a disgruntled employee who posted thousands of its employees’ details online, including bank account details, dates of birth, salary information, national insurance numbers, addresses and phone numbers. Though the perpetrator subsequently got eight years for breaches of the Computer Misuse Act 1990 and the Data Protection Act 1998 and Morrison’s was itself, in effect, a victim of the crime, the Court held that, since the decision of the House of Lords in Lloyd and Grace, Smith and Co [1912] AC 716,

“it has been clearly established that an employer may be vicariously liable for deliberate wrongdoing by an employee … [W]e do not accept that there is an exception to the irrelevance of motive where the motive is, by causing harm to a third party, to cause financial or reputational damage to the employer”[76].

We pointed out that, though at first glance the judgment might not appear to have very much to do with religion, faith-groups hold a considerable amount of data about their members and adherents and that, given the Court of Appeal’s judgment in Morrison, they would almost certainly be held vicariously liable for a breach if someone with access to the data were to make criminal misuse of it. However, Morrison’s has now been given permission to appeal to the Supreme Court: watch this space.

In Goldscheider v Royal Opera House Covent Garden Foundation [2019] EWCA Civ 711, the Court of Appeal upheld the judgment of Nicola Davies J that the claimant, a violist in the Orchestra of the Royal Opera House, had suffered permanent damage to his hearing as a result of playing in rehearsals for Wagner’s Ring cycle seated immediately in front of the trumpets, and was entitled to damages for what amounted to an industrial injury.

We can’t help wondering how many church organists over the years have had their hearing affected by playing at consoles immediately underneath the pipework.

The Los Angeles Times reports that the US Supreme Court may decide on Monday whether it will hear a petition for certiorari in the case of Melissa and Aaron Klein, fined $135,000 for refusing on religious grounds to make a cake to celebrate a same sex wedding. The Kleins contend that, in fining them, the State of Oregon had violated the Free Speech and Free Exercise clauses of the First Amendment. The associated issues are whether SCOTUS should overrule its earlier judgment in Employment Division, Department of Human Resources v Smith 494 US 872 (in which it rejected the argument that it was a violation of the Free Exercise Clause for a private drug rehabilitation organisation to dismiss two employees who used peyote for sacramental religious purposes) and whether it should reaffirm Smith’s hybrid-rights doctrine, applying strict scrutiny to free exercise claims that implicate other fundamental rights. [With thanks to Law and Religion Forum.]

For Church of England parishes which have not yet held their Annual Parish Meeting (formerly referred to as the “Vestry Meeting”) under section 4 Churchwardens Measure 2001, to elect Churchwardens, and subsequent Annual Parochial Church Meeting (the “APCM”) under the Synodical Government Measure 1969 to elect the PCC and conduct other parish business, here is our annual reminder of some useful links to the C of E and Charity Commission web pages:

We expect that essential “operational” items for review and action by new PCCs and Churchwardens would include safeguarding, health and safety, and now, fire safety – on which we will post in the coming week. The deadline for holding APCMs is 30 April.

DCMS is currently working with Topmark to try and make the current Listed Places of Worship Grant Scheme website easier to use and compliant with wider gov.uk standards. DCMS is seeking up to five places of worship that have recently used the LPWGS  to take part in interviews lasting approximately 45 minutes that will focus on users’ experience of the scheme and suggestions on how the website could be improved better to help current and future applicants. The interviews will be conducted remotely and can be arranged for any time to suit the interviewee’s schedule. DCMS says that it greatly values the input of those who have previously used the scheme and that the exercise will offer a chance to help shape the experience of future applicants:

“Whilst participation in the interview process is not remunerated, you would have the option of playing a further part in the design process and your feedback would be instrumental in taking the redesign forward.”

The revised ChurchCare web pages now include the dates of the Cathedrals Fabric Commission for England which may be found by scrolling down to the bottom of the page Cathedrals Fabric Commission i.e. past the large blank area. This page also includes links to the applications that the Commission examined and the decisions it made; they are in the form of PDF copies of all the applications/decisions for each meeting, i.e. Forms 8 and 10 respectively.

Of interest to ecclesiastical lawyers will be the decision to approve the long-term loan of the Archdeacon’s Court furnishings from Leicester Cathedral and their long-term loan to the Churches Conservation Trust (CCT) for public display at the church of All Saints, Highcross Street. This was considered at the CFCE meeting in January 2019.

Louise Connacher, a partner at Lupton Fawcett LLP who is currently Deputy Registrar of the Diocese of York, has been appointed Acting Diocesan Registrar of York from 15 April in succession to the late Caroline Mockford, and Deputy Provincial Registrar.

On Thursday, the Royal Maundy Service was held at St George’s Chapel, Windsor Castle when the Queen handed out commemorative purses to 93 men and 93 women, a reference to her 93rd birthday on Sunday. The BBC reports that the recipients were chosen in recognition of their service to the church and local community. On arrival at the North door of the chapel, the Queen and Princess Eugenie were presented with traditional nosegays, “which in ancient times warded off unpleasant smells”.

A service of more relevance to lawyers was held on Good Friday at the church of St Bartholomew the Great in the City of London under the Butterworth Charity, which was established in 1867. The will of Joshua Whitehead Butterworth, a member of the firm of law publishers, states: “On Good Friday in each year to distribute in the churchyard of St Bartholomew the Great the sum of 6d. to twenty-one poor widows, and to expend the remainder of such dividends in buns to be given to children attending such distribution.”

There are two hymns, a reading, a short address, and then the question as to whether there are any poor widows of the parish to whom 6d (today that has been increased to 4 shillings) should be given. After that, hot cross buns are distributed to all those who have come to this short service. 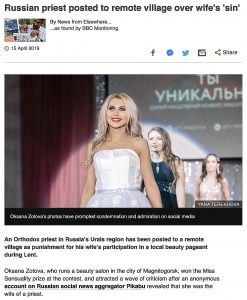 And one for the “you couldn’t make it up” category, although it has echoes of WS Gilbert’s Lord Chancellor. A senior judge was excused from jury service because he was due to preside over the case in question. The BBC reports that HHJ Keith Cutler, the resident judge of Winchester and Salisbury, said he was surprised when he was approached for jury service; however, his reason for not doing his duty was initially rejected when he contacted the Jury Central Summoning Bureau directly to explain:

“I told the Jury Central Summoning Bureau that I thought I would be inappropriate seeing I happened to be the judge and knew all the papers. They wrote back to me, they picked up on the fact I was the judge but said ‘your appeal for refusal has been rejected but you could apply to the resident judge’…but I told them ‘I am the resident judge’.”

And a Happy Easter to all our readers